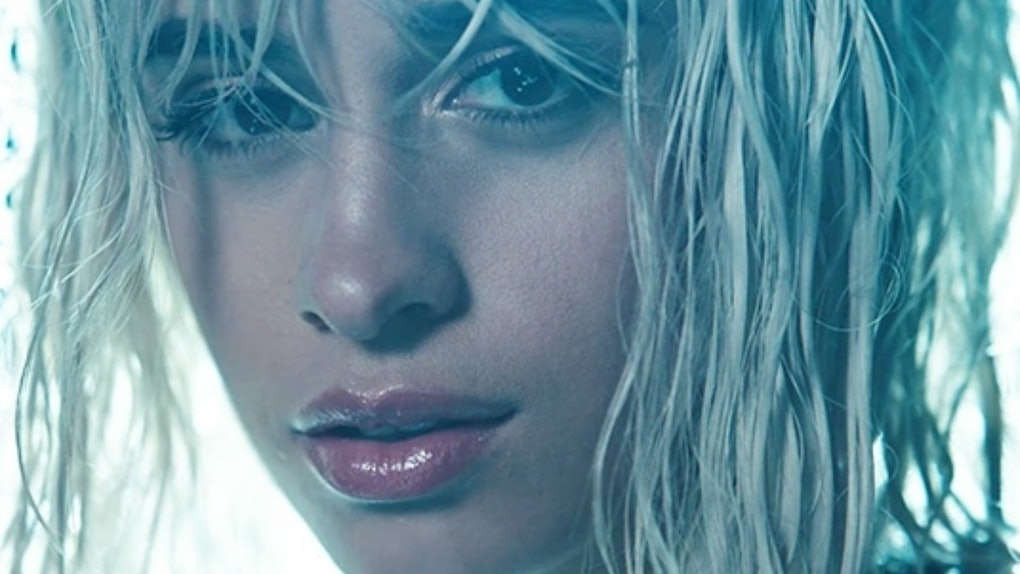 Camila Cabello is totally slaying it right now with all her collaborations. After dropping her super steamy “Señorita" music video with Shawn Mendes on Friday, June 21, Cabello has released yet another amazing music video, this time with Mark Ronson for "Find U Again." Similar to Cabello's music videos for "Havana" and “Señorita," the MV for "Find U Again" tells another interesting story with Cabello as the main character. In “Señorita," Cabello played the part of an ordinary waitress, but in her new video, she plays a woman on the run. Meanwhile, Ronson acts as a bounty hounter who is trying to find Cabello so that he can turn her in for a prize. Since Cabello is trying to remain low key, she puts on a disguise that includes a blonde wig. The tweets about Camila Cabello's blonde hair in her "Find U Again" video show that only one thought comes to mind when thinking of Camila Cabello in a blonde wig: Hannah Montana.

That's right. The Hannah Montana, aka everyone's childhood idol and Miley Cyrus' alter ego before she became Ashley O on Netflix's Black Mirror. As anyone who grew up watching Hannah Montana on Disney Channel knows, Miley Stewart (played by Miley Cyrus) put on a blonde wig whenever she performed as Hannah Montana so she could live a double life as a superstar and as an ordinary teenager. Since Cabello's character in the "Find U Again" music video is on the run, it seems that she had the same idea to put on a blonde wig so that the bounty hunters chasing her wouldn't recognize her.

But what is it with characters changing one aspect of their appearance and suddenly they become unrecognizable? I mean, there's Superman with his glasses, Hannah Montana with her wig, and basically any Marvel character ever with a baseball cap. It's hilarious, and the internet seems to think so, too.

Here's how fans reacted to Camila Cabello's blonde hair in the "Find U Again" music video:

The comparisons all started when Camila Cabello posted a picture of herself wearing the blonde wig on Instagram the day before the "Find U Again" video dropped. She captioned the photo, "What should her name be?" Of course, with a question like that, fans responded with "Hannah Montana." Some even got creative and suggested "Camila Montana" or "Hannah Cabello."

One fan even thought she looked like Britney Speaks and honestly, I see it.

Other fans suggested the name "Karla" since the star's full name is Karla Camila Cabello. If you didn't know that before, well, now you know.

It seems that Camila Cabello really has a talent for taking on different characters. As I said before, in Cabello's music video for “Señorita," she pretended to be a waitress who totally had the hots for Shawn Mendes' character, and in "Havana," Cabello upped the antics by pretending to be a dramatic telenovela character. Now in "Find U Again," Cabello does it again by releasing her inner Hannah Montana to play the part of someone living a double life. Is there anything Camila Cabello can't do?

More like this
Camila Cabello's 'Cinderella': Release Date, Cast, Trailer, & More
By Abby Monteil
These Tweets About Beyoncé On Netflix's 'Selena: The Series' Are Too Much
By Dylan Kickham
Is Olivia Rodrigo's "Good 4 U" About Joshua Bassett? Fans Are Convinced
By Michele Mendez
Stay up to date