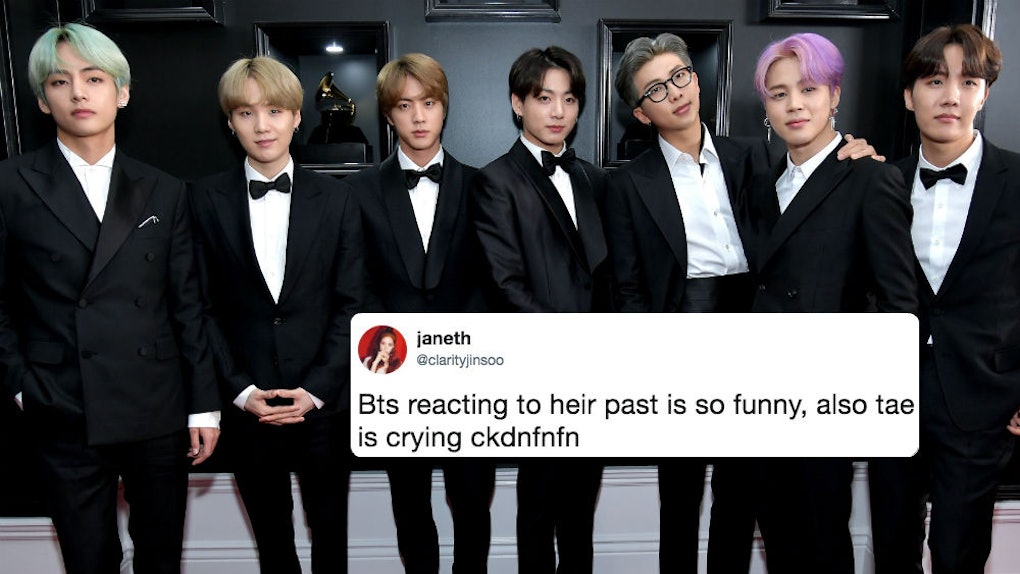 BTS ARMY members just got a special treat in the form of the group's Love Yourself In Seoul DVD. Of course, the fans who have gotten their hands on their DVD are drooling over the concert film they saw in theaters all over again, but the DVD also includes new footage that gives fans a backstage look into what it's like being a member of BTS. And the tweets about BTS' Love Yourself In Seoul DVD are totally fangirling over the sweet look into what goes on backstage with their seven faves.

I would say that it's been a busy week for BTS and their fandom, but I feel like something notable happens with this group every week? Could it be that their PR team works harder than Kris Jenner? Seriously, it's only Wednesday and this week has been chock full of BTS news!

Leading up to the release of this DVD, all BTS fans could talk about was the reveal of the BTS x Mattel fashion dolls that will hit store shelves this summer. Then there was the news that one of RM's solo music ventures — a single called "Crying Over You" created with English electronic duo Honne — was getting an international release (it dropped on U.S. streaming services this morning, so go listen). Woo!

And now, fans who ordered their Love Yourself In Seoul DVDs just got them, and fans are living for it.

The DVD includes some quirky behind-the-scenes looks at rehearsal footage.

Like this clip of Jimin trying to tie his shoe and dance at the same time.

Then there's this moment of Jikook playing with Jimin's bucket hat.

Here's Jikook teasing V while he tries to concentrate on practicing his "Singularity" performance.

Could VMinKook be any cuter?

And here's Suga poking fun (literally) at J-Hope while he was flexing (lol).

The DVD also gives insight into the emotions the boys go through on tour.

Like the time Jungkook got emotional over making a small mistake during a concert:

And playing with dogs is definitely an important aspect of keeping things chill on the road:

The DVD even has more footage of concert moments we didn't see in the theatrical release.

It even includes a special video of the boys reacting to their Red Bullet tour circa 2015.

Which is, let's be real, was just an opportunity for the boys to mercilessly roast their younger selves.

From the looks of fans' who received their DVDs in the mail today, the package includes photo cards of Jin, Suga, RM, Jungkook, Jimin, V, and J-Hope performing, three discs-worth of footage, and some straight-up gorgeous packaging. Add this to the list of BTS products the ARMY is rushing to buy.

Another one of those products are the BTS x Mattel dolls.

"MIC Drop, ARMY!" the tweet debuting the dolls said. "For the first time ever, we're thrilled to show you the line of #BTSxMattel fashion dolls! Take a look at V, SUGA, Jin, Jung Kook, RM, Jimin and j-hope as dolls inspired by the Idol music video!"

The tweets about the BTS x Mattel dolls showed fans being torn over them. While they didn't think the dolls were perfect, they appreciated the work that was put into them.

That's one of the best things about the BTS fandom: Even when things don't go how they expected, they still remain largely positive, supportive, and try not to put negativity into the world.

BTS' next album, Map Of The Soul: Persona, is coming out in April, which means a tour won't be long after that, so hopefully that tour will also come with its own DVDs in the future so the BTS ARMY can remember the performances forever.

More like this
This Theory About The Songs In BTS' "Butter" Concept Videos Will Blow ARMYs' Minds
By Michele Mendez
These Tweets About The Weeknd & Ariana Grande's "Save Your Tears" Remix Are All About Their Fire Vocals
By Sydney N. Sweeney
These Tweets Comparing Billie Eilish's 'Happier Than Ever' & Ariana Grande's 'Sweetener' Covers Are A Lot
By Sydney N. Sweeney
Stay up to date