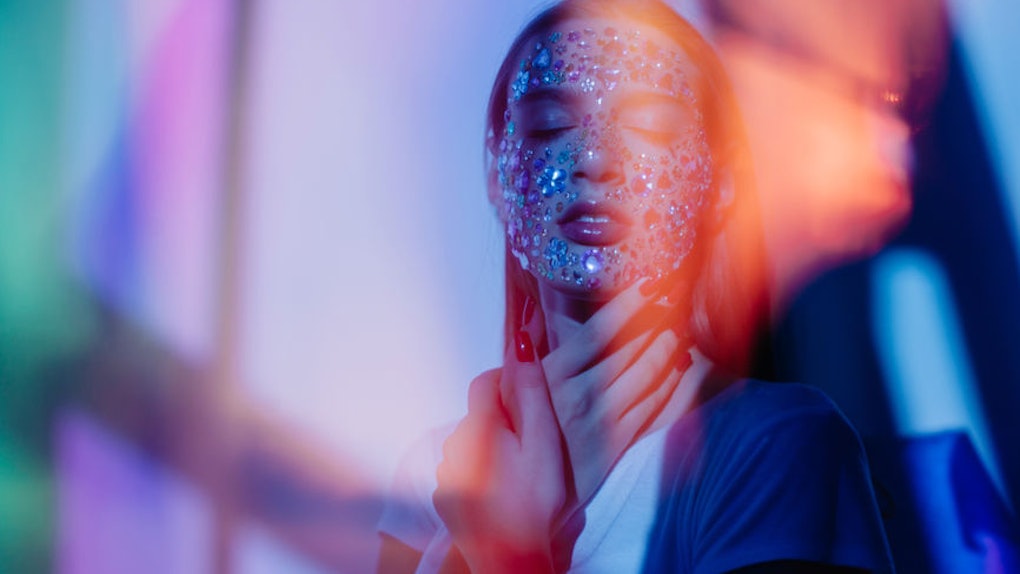 There's a magical full moon upon us, and it will light up the night sky just in time for the holidays. Full moons bring things to the light in order for us to acknowledge something, but in this particular case, the spiritual meaning of the Cold Moon 2018 will shed light on our inner security along with our professional life, and perhaps external life. However, before we go for a moonlight-swim in Cancer's ocean of emotions, let's take a general look at the full moon, its astrological meaning, and symbolism, because as many of you know, the phases of the moon speak for themselves.

First thing's first: The moon is a symbol of our inner world and shadow self. In astrology, it is a representation of our emotional instincts, unconscious beliefs, and sense of nurture. Interestingly enough, the moon is Cancer's planetary ruler, which will ultimately magnify the potency of the upcoming lunation. Furthermore, during a full moon phase, the moon sits directly opposite the sun, and is fully illuminated with the sunlights reflection. Now, given that the sun and moon are on opposite sides of the zodiac wheel, we experience the intensity of two polar opposite energies on a monthly basis: yin and yang.

This is precisely why full moons bring both closure, along with a call for balance, which in this case, it's the opposition of Capricorn vs. Cancer. Granted, this is equivalent to a cosmic tug of war, causing emotional tension and friction. However, once we get passed our hypersensitivity, and in some cases anxiety, we are given an opportunity to see the truth right before our eyes. Fact is, the energy of the full moon can be incredibly magical, especially when the intentions have been set, and the work has been done. Which reminds me, think back to the new moon solar eclipse in Cancer that took place on July 12. This is your cosmic culmination.

As I previously mentioned, the cold moon 2018 will illuminate the sky in the sign of domestic Cancer, just one day after the winter solstice, which also happens to be the first day of Capricorn season. FYI: Cancer is the sign of home, family, security, motherhood, and emotional foundation. Capricorn, on the other hand, is the sign of structure, responsibility, authority, and wisdom. Despite their differences, however, these two cardinal signs are also strangely similar. In fact, think of it this way: Cancer is the mother and Capricorn is the father.

One thing's for sure: we will definitely be in our feels during this full moon, as it is not only Cancer's planetary ruler, but also the most potent amongst the moon phases. Hint: whatever you initiated during the new moon in Sagittarius on Dec. 7, could come to fruition, within two weeks (before or after) this full moon. On another note, however, it's important to reflect on how far you've come, in regards to your home, family, emotional stability, since the new moon solar eclipse in Cancer that took place on July 12.

Lastly, the astrology of this full moon is definitely something to consider. For staters, there will be a lot of Uranian influence, which is always sporadic, intuitive, and insightful. For instance, the full moon will be making a square to electric Uranus, which could spark unexpected changes along with an extremely heightened intuition. (Pay attention to the downloads you receive during this time.) Actually, some of you might suddenly change residences, or have a change of heart, all thanks to Uranus' lighting speed.

This is indeed a spiritual lunation, and I'll tell you why. Neptune will also be making a square to curious Mercury, which will ultimately add color to our imagination, along with some dreamy inspiration. Moreover, charming Venus will be making a harmonious trine to Neptune as well, which could create an enchanting, romantic, and perhaps idealistic atmosphere. Whimsical Christmas? You better believe it. In fact, it wouldn't be a bad idea to bring some tissues with you, too. Relax. There's nothing to be afraid of, unless you're not the "emotional type," considering this full moon will be swimming in magic, holiday nostalgia, and lunar love.