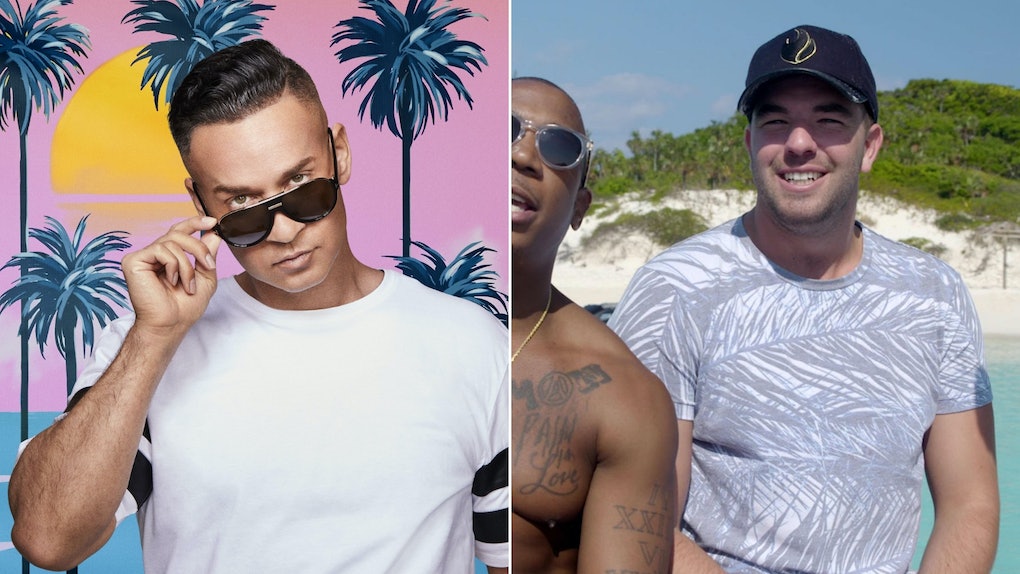 Apparently, Mike "The Situation" Sorrentino is making some famous friends in prison of all places. Mike's Jersey Shore Family Vacation costars DJ Pauly D and Vinny recently spilled on what is going on with him while he's behind bars, and revealed that he is hanging out with some very well-known convicts. The Situation and Billy McFarland, Fyre Festival organizer, are buddies in jail, so get ready for that reality show when they both get out.

Last year, Mike Sorrentino pled guilty to tax evasion, and surrendered himself to begin his eight-month prison sentence on Jan. 15, 2019. Following his sentencing, Sorrentino's team gave the following statement to Elite Daily. "Mike accepts the courts decision and looks forward to marrying his college sweetheart, Lauren Pesce and moving forward together after serving his sentence. He anticipates to come back stronger as an individual and couple in the same healthy mind set that he has had for the last 3 years. He and Lauren are both so thankful for everyones support and prayers!"

In between his guilty plea and his sentencing, Mike filmed two seasons of the Jersey Shore revival series Jersey Shore Family Vacation, and a big part of the show focused on Mike preparing to go to jail and his cast mates supporting him through the difficult time. Now, Mike is nearly halfway through his sentence, and is apparently making some new friends while in captivity.

DJ Pauly D and Vinny spoke about Mike's new prison companions on a recent episode of SiriusXM's The Jenny McCarthy Show while promoting their new dating competition show Double Shot at Love with DJ Pauly D and Vinny. And the two guidos revealed that Mike has some pretty infamous company — his fellow jailbirds include one of the people behind the mass celebrity photo leak in 2014 and the infamous Fyre Fest fraudster Billy McFarland. Vinny and Pauly D said,

You can hear the interview for yourself below. The duo begins to talk about Mike's prison life at the 6:43 mark.

Mike is currently detained with Billy McFarland and convicted hacker George Garofano at the Otisville Federal Correctional Institution in upstate New York. The minimum-security, men-only prison has been referred to as one of "America's cushiest prisons," and its famous inmates will have another notorious convict joining them next month. Trump's former lawyer Michael Cohen is scheduled to begin his three-year sentence at Otisville in May. The Situation and Billy McFarland may have found themselves a new Scrabble player, I guess.

Earlier this month, Snooki gave a similar update about Mike's life in jail, even going so far as to say that he is "having the time of his life." She said that he spends his time playing games, working out, and trying to help his fellow inmates recover with his newly signature positive vibes. Although Mike was undoubtedly the most aggressive and unhinged member of the original Jersey Shore cast back in the early 2010s, his Family Vacation appearance showed a completely new side to him. Now completely sober, Mike has taken to a much more chill lifestyle and often offers up little pieces of advice to his cast mates.

Another thing that Pauly D and Vinny said is helping Mike through his sentence is knowing that he has a TV show to get back to when he gets out. Mike is presumably sitting out of the upcoming third season of Jersey Shore Family Vacation, but he is ready to get back to work once he is released in September.