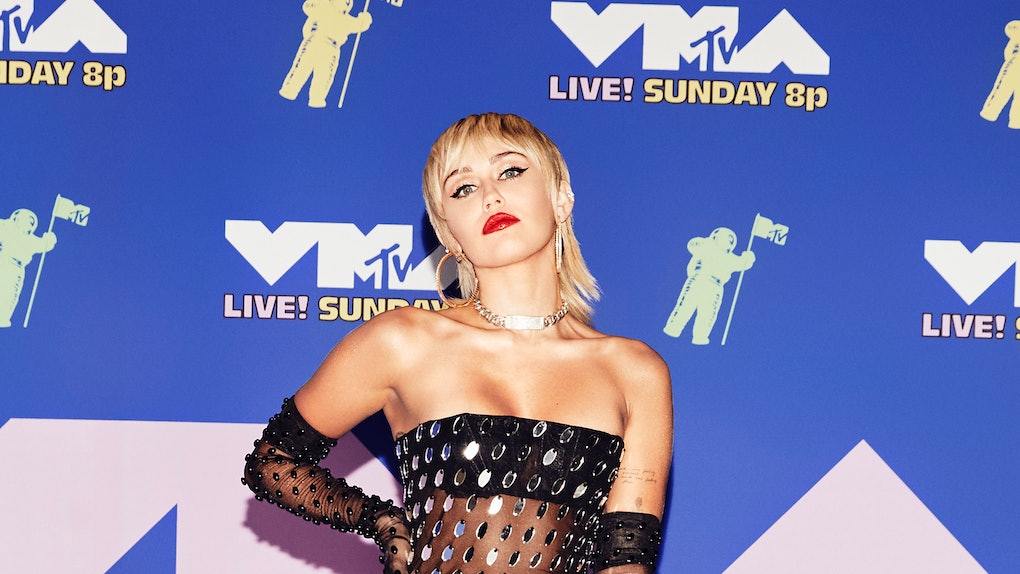 Miley Cyrus has a bone to pick with the MTV VMAs staff. Cyrus was one of many performers to grace the virtual 2020 VMAs stage, delivering an epic performance of "Midnight Sky." But after the show, she revealed not every aspect of her awards show appearance was peachy. The sexist comment Miley Cyrus said a VMAs director made about her at the 2020 show was unacceptable.

Cyrus' live production is always top-notch, but it was during a routine discussion about stage direction that she received the sexist treatment from VMAs staff. The singer re-told the story during her appearance on the Joe Rogan Experience podcast, though kept the specific name of the VMAs staff member to herself.

“I was just asking some questions, not even on some diva sh*t," she began. "I wanted the lights to be turned off and then the lighting of the room to just be lighting me. So no key light, no beauty light. Beauty light is always used on women, and I said, ‘Turn the f*cking lights off.’ You would never tell Travis Scott or Adam Levine that he couldn’t turn the beauty light off."

Apparently, the request rubbed the VMAs staffer the wrong way. "They said, ‘Okay, we’ll just do the same thing that we would do with the guys,’ because that’s what I want. And then something that I was doing […] for the VMAs, my bracelets kept getting caught in all this sh*t and they said, ‘You want to be treated like a guy and lit like a guy? We wouldn’t be dealing with this if a guy was doing it.’"

In true Miley fashion, she clapped back with the best response. "I said, ‘Well, a guy wouldn’t be doing this, because a guy doesn’t sell your show with sex the way that I’m going to,’" she recalled, adding that the conversations she had with the directors were "ridiculous" and "embarrassing."

You can watch the interview clip with Rogan below.

Sexist comments aside, Cyrus' VMAs performance was flawless, and had exactly the lighting she asked for. In case you missed it, you can catch her performance from the awards show below.

Cyrus is hardly the first pop star to call out a large-scale awards show. In 2019, Ariana Grande clashed with Grammys producer Ken Ehrlich, claiming he "stifled" her creative expression. Sure, awards shows are full of glitz and glamour, but they apparently come with plenty of behind-the-scenes drama.