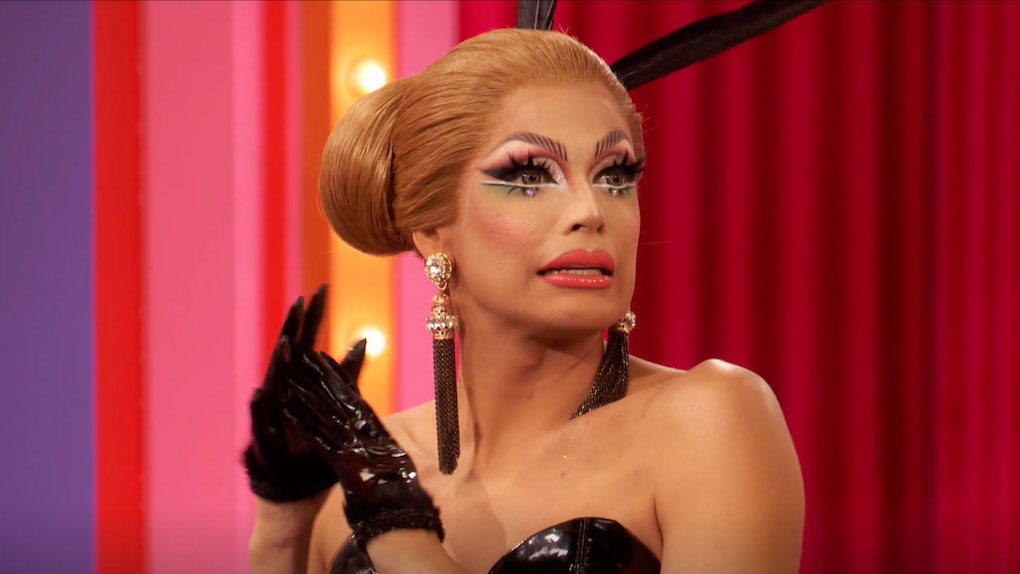 Ten of the fiercest queens to come from RuPaul's Drag Race are sashaying back into the Werk Room for another chance at snatching the crown, and now we finally get to see how they re-entered the Werk Room during the All Stars 4 premiere. VH1 has released the first 14 minutes of the new season, and the RuPaul's Drag Race All Stars 4 extended preview actually has fans worried that RuPaul might be bringing back one of the show's most controversial twists.

In the first 14 minutes of the All Stars 4 premiere — which you can currently watch on VH1's website — we see eight of this season's ten queens stomp into the room in sickening new looks, as they spout out new twists on catchphrases and react to the other Drag Race alumni they will be competing against. The slate includes standout contestants from recent seasons of Drag Race: Season 6's Gia Gunn reintroduces herself as a trans woman, Season 7's Jasmine Masters has a much larger fanbase thanks to her popular memes, and Season 8's Naomi Smalls shows off her legendary legs yet again. Season 9 brings back the most queens with Farrah Moan, Valentina, and Trinity The Tuck (Trinity Taylor's official new name), and two Season 10 queens round out the cast: Monet X Change and Monique Heart.

But after those eight have entered, RuPaul drops a bombshell: there are two more queens entering the competition. Of course, Drag Race fans already know that Latrice Royale and Manila Luzon will compete this season, but their entrance is gagging the fandom because of one possible twist that nobody saw coming. The two queens enter handcuffed together after RuPaul announced them by their All Stars 1 team name: Team Latrila. Oh god... are we in store for a resurrection of the All Stars teams twist!?

Pretty much every Drag Race fan (and even contestant) agrees that the first season of All Stars suffered immensely because the show forced the queens to compete in teams of two. Some fans blame that twist for sending popular All Stars 1 contestants Latrice Royale and Manila Luzon home earlier than expected, which seemed to be why they were selected to be the first queens to ever compete in a second season of All Stars this year. It would be a pretty devastating letdown to force Latrice and Manila to compete as a team again instead of letting them shine on their own.

After the preview clip went live, some of the contestants teased that the teams twist was indeed happening this season on social media.

But thankfully, this definitely feels like a fake-out. The All Stars 1 teams twist is just too notorious among the franchise for them to possibly consider actually doing it again, it seems. Plus, the trailer for All Stars 4 shows the queens all competing separately, rather than in team challenges like in All Stars 1. It seems to me like fans can expect those handcuffs to be thrown off of Latrice and Manila right after they are revealed.