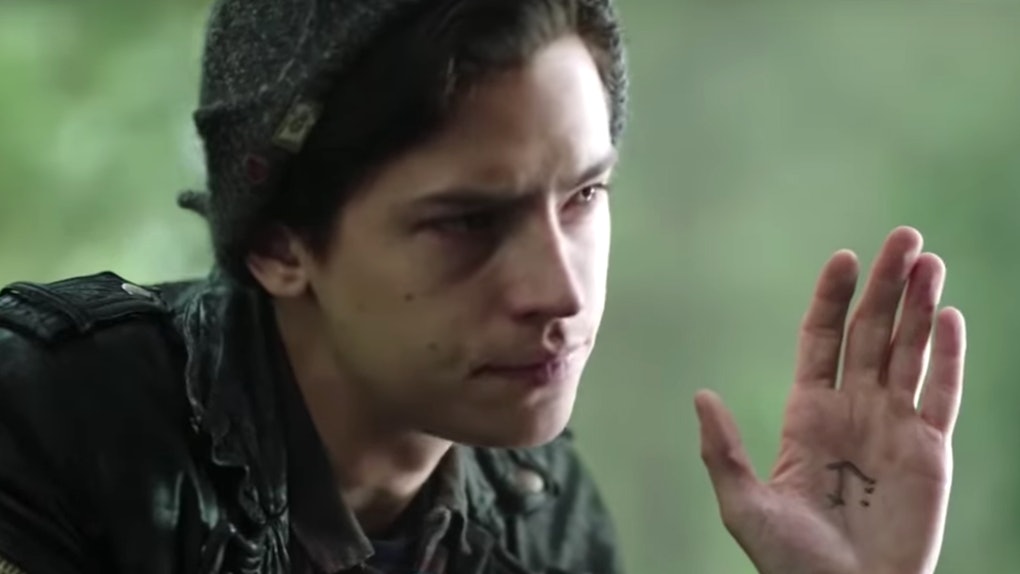 If you thought this week's new episode of Riverdale was creepy, the promo teaser for the next new episode will have you totally freaking out. Now that the Gargoyle King mystery is in full swing, it looks like we may finally start getting some answers in the upcoming sixth episode, entitled "Manhunter." The Riverdale Season 3 Episode 6 teaser includes some scary new details about the Gargoyle King, along with some pretty shocking revelations about the possibly doomed fates of Archie and Josie.

Spoiler alert: This post will contain plot details from Riverdale Season 3 Episode 5, "The Great Escape." This Wednesday's adrenaline-pumping new episode finally started to tie together everything that has been going on in Riverdale, as Archie's stint in prison and his jailbreak was revealed to surprisingly be part of the mysterious Gryphons and Gargoyles game. The most unsettling part of the episode was its ending, when a newly obsessed Jughead crosses paths with the Gargoyle King in the woods. Instead of running away, Jughead bows to the Gargoyle King.

That bone and branch monster is still the biggest mystery in the show, but the teaser for Episode 6 hints that we will find out more about the Gargoyle King very soon. In the new teaser, Jughead discovers that the Gargoyle King is not alone — he has a horde of masked disciples with their own scary masks.

And the appearance of these disciples of the Gargoyle Knight could also help strengthen one of the strongest fan theories so far: that the Gargoyle King is connected to Alice Cooper's new cult, the Farm. Check out the teaser trailer for yourself below and then we can get into that possible connection even more:

The Farm was notably completely absent from the most recent Riverdale episode, and fans are still waiting to see how this strange new cult ties into everything. But it definitely looks like the Farm is back in Episode 6. The teaser includes a quick shot of Josie having a seizure, which seems to be the Farm's signature attack on any potential threats. The new clip also shows that the Gargoyle King will surprisingly appear to Betty and Alice in the Cooper house, and since their storyline has been all about the Farm this season, we might see a connection.

But most telling is how we see the Gargoyle King standing around a bonfire with his Gargoyle Knights in the woods. We saw the members of the Farm in the same formation around a fire in the season premiere, when Polly's twins began hovering. It definitely seems to connect the two supernatural mysteries.

Other important scenes from the teaser show Joaquin informing Jughead about the meaning of the symbol Warden Norton branded on Archie: it means "sacrifice." And it looks like Archie will be enlisting Kevin's help to flee Riverdale now that he's a wanted man.

It all goes down when Riverdale Season 3 Episode 6 premieres on Wednesday, Nov. 28 at 8 p.m. ET on the CW.

More like this
When Will 'Riverdale' Season 5 Return In 2021? Its Mid-Season Break Is Long AF
By Rachel Varina
The 'Grey's Anatomy' Season 17, Episode 15 Promo Is A Farewell To Jackson
By Abby Monteil
This 'The Handmaid’s Tale' Season 4, Episode 5 Promo Shows June In Chicago
By Ani Bundel
Stay up to date