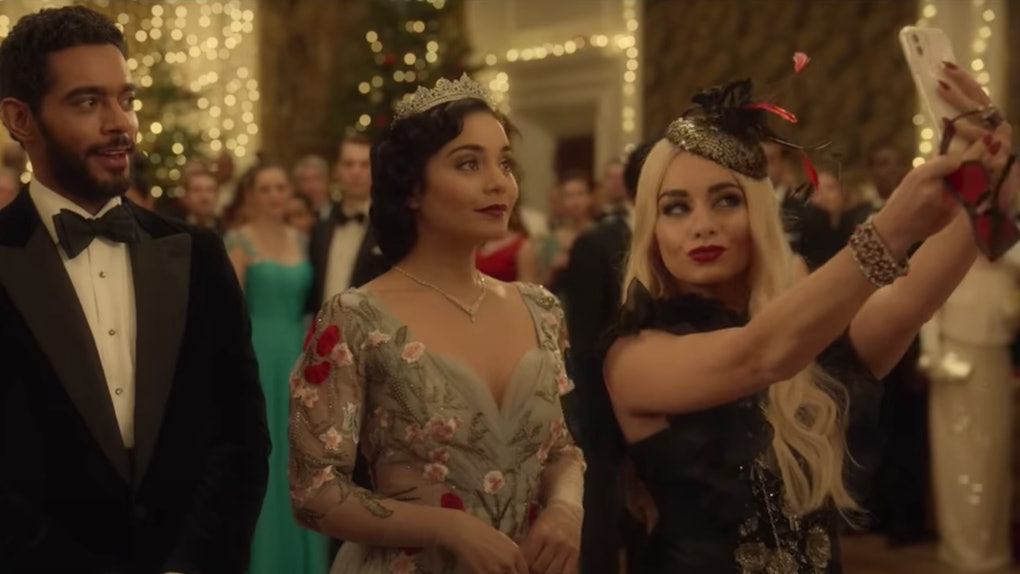 'The Princess Switch: Switched Again' Trailer Will Have You Seeing Triple

This holiday season, you can count on Vanessa Hudgens to bring all the Christmas cheer this year, with a little help from Vanessa Hudgens... oh yeah, and Vanessa Hudgens. Back in 2018, Hudgens starred alongside herself in Netflix's doppelgänger holiday hit The Princess Switch, and now she's taking on a third role in the upcoming sequel. If that sounds a little chaotic, that's because it is. Check out the newly released The Princess Switch: Switched Again trailer to ring in the most Hudgens-ful time of the year.

In the first movie, Hudgens starred as both Chicago-based baker Stacy DeNovo and Montenaro duchess Margaret Delacourt, two women who surprisingly discover they look exactly the same. They used their resemblance to switch places, giving Margaret some desperately needed time away from her throne and Stacy a taste of royal life. For the sequel, the pair will attempt another switch, but there's a big hitch in the plan this time: a third lookalike. The trailer introduces Duchess Margaret's cousin Fiona, who plans to pull off a switch of her own to snag the throne from Margaret.

That's right — Hudgens is pulling triple duty to play Stacy, Margaret, *and* Fiona in the new movie, complete with varying accents and a blonde wig. Get a first look at the sequel in the trailer below.

As teased in the trailer, the sequel will up the royal drama from the first movie. In order to spend more time with her love interest Kevin in the midst of her upcoming coronation, Margaret pulls off another switch with Stacy... only for Fiona, Margaret's scheming cousin, to join in on the switch to try to grab power for herself. Netflix's synopsis for the movie tries to make sense of the Hudgens-filled chaos:

When Duchess Margaret unexpectedly inherits the throne to Montenaro and hits a rough patch with boyfriend Kevin, it's up to her double Princess Stacy of Belgravia to get these star-crossed lovers back together... but the course of true love is complicated by the appearance of a handsome royal who's intent on stealing Margaret's heart. Throw in the unexpected arrival of Margaret's outrageous party girl cousin Fiona, a third look-alike who has ambitions of her own, and you have the recipe for Christmas triple trouble!

The Princess Switch: Switched Again will arrive on Netflix on Nov. 19.