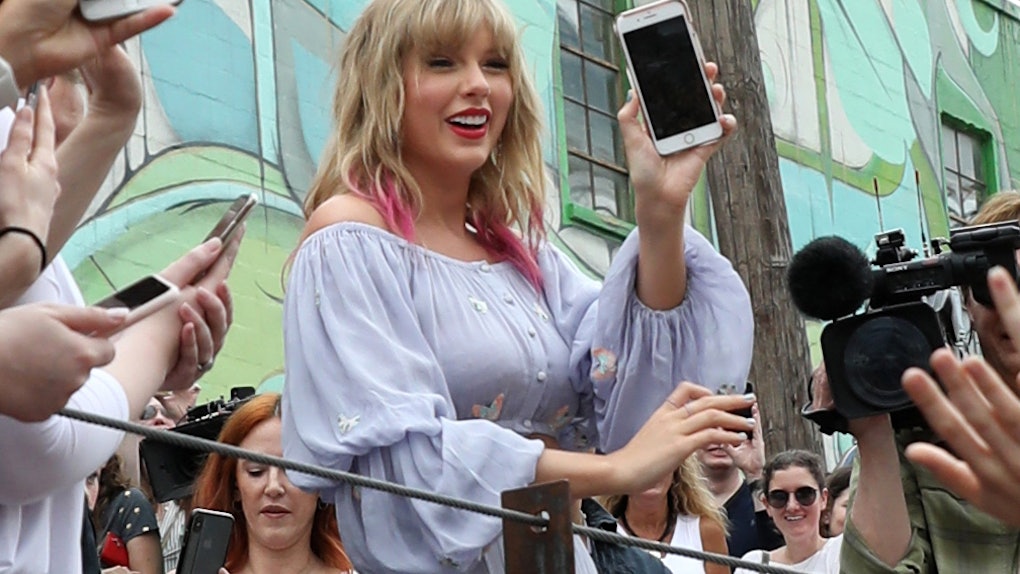 This is not a drill. Taylor Swift just confirmed her secret project is, in fact, new music, and she is leaving us clues, you guys. With less than 12 hours until go time, Swift jumped on Instagram to tell her fans she's left a series of hidden details in a colorful painting in Nashville and Swifties are losing it. The photos of Taylor Swift's TS7 butterfly mural has fans panicked trying to crack the code and find the clues Swift says she's left for them, and in the meantime, Twitter is being flooded with exclamation points. In reality, it will all make sense come midnight on Friday, April 26, but people can't control their excitement until then.

On the Thursday before her new ~content~ (whatever it is) dropped, Swift popped up on her Instagram stories to reveal the meaning behind the mural.

"OK so we've commissioned this butterfly mural to be painted on a wall in Nashville and put clues about the song and the new music in the mural," she explained. "So I'm going to go show up. The butterfly mural is painted by Kelsey Montague who painted one of my favorite murals in New York. And, uh, let's go see what happens."

I'll tell you exactly what happened. People became hysterical. Swift dropped by the mural just like she said she would where an apparent swarm of fans was eagerly waiting to greet her. Tons and tons of people snapped amazing photos of the detailed mural and captured Swift on camera, too. The fact is, though, the mural looks mostly like a collage of pretty things and that's it. There are a series of hearts, flowers, cats (which must represent Swift's kitties Olivia Benson and Dr. Meredith Grey), rainbows, and more. Unless her tracks are named things like "'hearts', 'flowers', 'rainbows', and 'cats'" I have no idea what I'm looking at, here.

By the looks of Swifties' tweets, they don't have the clues figured out either. All they know is that they're excited. (!!!)

You guys get it.

E! noted that Swift first hinted at the new album as far back as October 2018 during her acceptance speech for Favorite Pop/Rock Album at the 2018 American Music Awards. At the time, she explained how she views each new album as a chapter in her life and that she had a funny feeling the impending chapter was going to be her favorite.

Whatever is coming for us, it lands really, really, really soon. I stand by what I said: I'll be super upset if her debut single off this album isn't called "Cats." Who's with me?