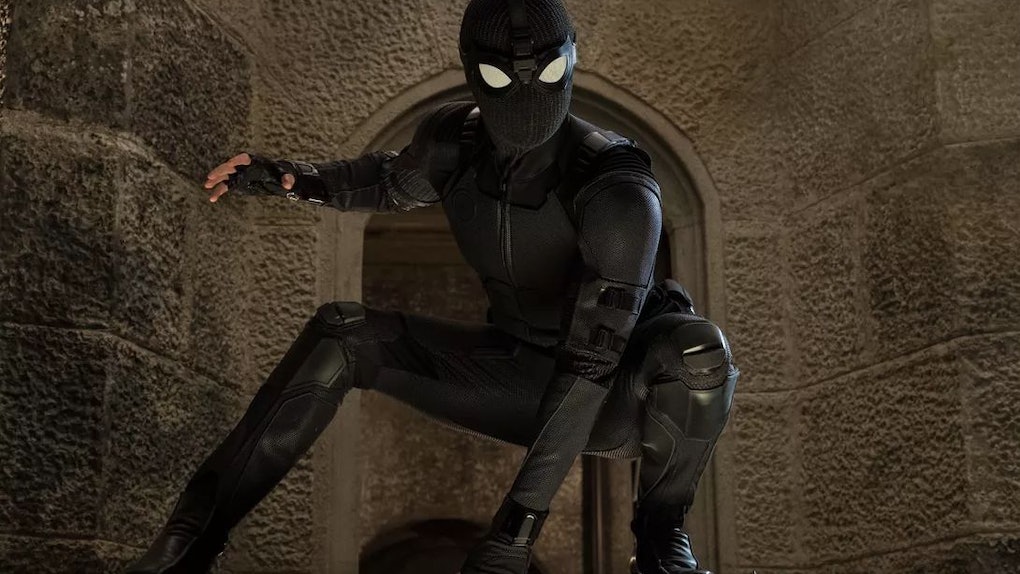 The marketing game promoting Spider-Man: Far From Home has been downright remarkable. The seamless transition from Avengers: Endgame's bonus re-release theatrical run gave the film a boost resulting in Spider-Man's box office record smash. Spider-Man's own re-release then pivoted perfectly into the Blu-ray/DVD announcement. The home video marketing has been peppered with perfect clips, like the latest Night Monkey trailer. It's a great parody reminding audiences that even without the Marvel Cinematic Universe, the Spider-verse isn't about to take itself too seriously.

"Night Monkey" is Spider-Man admitting the ridiculousness of its premise. In the film, the "character" becomes a running joke after Nick Fury pushes Peter Parker into assisting Mysterio in taking down an Elemental. Since the "friendly neighborhood Spider-Man" isn't supposed to be seen outside his Brooklyn neighborhood, Fury dresses Parker up in an all-black suit. Unfortunately, Spider-Man is rather distinctive in his web work. People start asking if this all-black wearing hero isn't, in fact, everyone's favorite young Avenger.

Faced with this question, Parker's best friend Ned attempts to cover for his pal. He declares this hero is merely the cheap European knock-off version, and — thinking fast — comes up with the name: "Night Monkey!"

Doesn't have the same ring as Spider-Man, but never mind. Now Sony has taken the footage from the film and re-edited it into what a Night Monkey trailer might have looked like.

The joke gets better for fans of the comics. Night Monkey isn't a character or anything (that was made up purely for Far From Home.) But stealthy black suits have been part of the Spider-Man wardrobe, especially in Spider-Man: Noir. (The flip-up goggles and the bells and whistles are all pure MCU Spider-Man though. Blame too much Iron Man influence on Parker's life)

It is almost certain that Sony came up with this idea long before the Blu-ray/DVD release. Since the character is a joke in the film, a parody trailer is a natural gag to include as part of the bonus features. And yet, fans are suspicious, because this gag comes at a moment that feels like an ironic bit of timing.

When the news broke that Sony's Spider-verse and Disney's Marvel-verse were, at least for the moment, separating, if not filing for divorce, the most often-repeated joke featured Night Monkey. Since the character is merely Spider-Man under another name, the joke went, the MCU could bring back Tom Holland under the "Night Monkey" moniker and have him rejoin the superhero crew when the new set of Avengers are announced.

Add to that that this Night Monkey trailer wasn't announced as part of the Blu-ray/DVD bonus features originally, and one has to wonder if Sony isn't at least having a little bit of last-minute plausibly deniable fun.

Chances are the answer is no. (After all, the break up was not anticipated by anyone, let alone the jokes about it.) But the timing is surprisingly perfect.

The Spider-Man: Far From Home digital download is available now. The Blu-ray and DVD versions arrive in stores on Oct. 1, 2019.