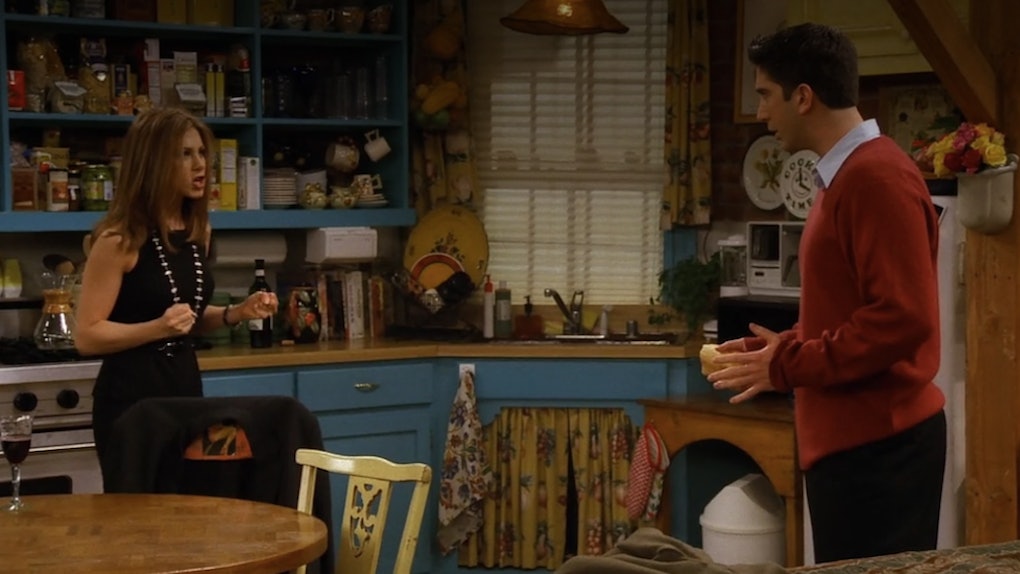 Let's get one thing straight: Friends is one of the best shows ever made. Sure, it's got its issues, I'll admit that. But really, the characters are relatable, the stories are smart, and the friendships are admirable. So now that you're here, I'm assuming that either you, too, are a Friends fan, or you're here to hate-read about the show — which I can honestly also respect. But it's hard to deny that Friends brought us some of the most amazing examples of #RelationshipGoals, so the most intense couple fights on Friends are worth exploring, because they actually bring up important issues.

Now, before we dive in, just know that there will be spoilers ahead, so if you haven't seen the series in its entirety then I suggest doing so right now. Obviously, Friends gave the world some of the most commonly referenced one-liners of all time, as well as some original one true pairings. Whether you're a Rachel who is so over her Ross, or a Monica who has just found her Chandler, the couples on Friends have something to teach you. Issues of cheating, long-distance relationships, control, and jealousy were all brought up on the show, so apart from making you LOL, it also probably made you think. Now, without further ado, the most intense couple fights from Friends. Take notes.

1. Ross' jealousy of Mark and Rachel.

Now, it’s my personal opinion that the issue at play with the whole “we were on a break” thing (which we'll get to later) had more to do with this particular situation than with the logistics of the “break” in general. Basically, Ross and Rachel were fighting because (*gasp*) Rachel was working hard at a job she loved, and Ross was jealous of her coworker, Mark.

Let’s be clear here when we say that Ross was only jealous of Mark and Rachel because of his own insecurities. Rachel never let anything remotely romantic happen with Mark, even when it was clear that he was interested in her. For me, this fight is more important than the issue of whether or not they were on a break because Ross wasn’t supporting his girlfriend or her passions.

2. The one where Ross and Rachel "were on a break!"

Out of all the memorable moments on Friends, this will forever remain one of the most (if not the most) iconic. Now, there are two sides to every story, and obviously Ross' side is that he and Rachel were on a break when he slept with the girl from the copy shop.

However, the question of whether or not they actually were on a break is still debatable. And really, that doesn’t seem to be the issue here. The issue is that Ross’ jealousy of Rachel's coworker, Mark, got the best of him, and he was so insecure in his relationship that he immediately turned to someone who would sleep with him even though he knew it would hurt Rachel.

Sure, he can keep saying “we were on a break!” But that doesn’t mean he's right.

3. The one with the Joey-Chandler-Kathy love triangle.

This fight is also pretty complicated. One of the biggest points of conflict in this fight is between Joey and Chandler, but Kathy is also involved. Kathy, an actress who forms a relationship with Joey but then falls for Chandler and kisses him, isn’t completely at fault. But unfortunately, she doesn’t exactly prove her character later on in her relationship with Chandler, when, ya know, she cheats on him.

After she and Chandler finally get together, Chandler gets a bit jealous of her new acting partner and confronts her about it. She denies his allegations, but then turns around and sleeps with the man Chandler was worried about. Jealousy certainly played into this fight too, although no one is really innocent here.

4. The one where Chandler thinks Monica is baby-crazy.

Ugh, this fight makes me upset. Because really, Chandler is being ridiculous. After their friends all find out that Monica and Chandler are together, they start teasing Chandler about how they're going to get married and have babies, like, ASAP. And of course, Chandler gets freaked out and starts to take it out on Monica, who he accuses of having “baby fever” and being obsessed with babies and marriage.

Honestly, where do I even start with this one? First of all, Chandler is totally playing into the stereotype that Monica does want all of that, when they haven’t even talked about it. And secondly, why is it so wrong for her to want marriage and kids? Hint: It’s not. Chandler is just being a scared jerk and it’s simply not OK.

5. The one where Chandler gets jealous of Richard.

OK, what is it with the guys on this show and their jealousy? It must have to do with insecurity, considering Joey, the most confidently cocky of the group, rarely ever had issues this intense. On the other hand, Chandler still got jealous when he learned that Monica had lunch with her ex-boyfriend Richard. Yes, the same Richard who Monica ended things with because they didn’t want the same things.

This leads to their biggest fight to date, even though it’s supposed to be their fun, romantic, one-year anniversary trip to Las Vegas. Eventually they make up, and granted, Monica should have told Chandler about seeing Richard as soon as it happened, but Chandler definitely made it into a bigger deal than it needed to be.

6. The one where Ross doesn't read the letter.

Oh, Ross. I have no qualms in saying that Ross Geller is my least favorite Friends character, even behind Emily or Ursula. Ross could have completely avoided this fight if he had simply read the letter that Rachel poured her heart and soul into. Seriously, Ross is an intelligent man, as he loves to remind us all, so it shouldn’t have taken him all that long to read the letter. And if he had, then he and Rachel wouldn’t have fought, and he might have seen her side of the story.

7. The one where Ross (sort of) marries Emily.

Now, the whole Emily thing might just be the one and only time where I sympathize with Ross. Sure, he messed up by saying Rachel’s name at his wedding, but the ensuing drama where Emily grows extremely jealous of Rachel and even asks Ross not to see her ever again still sucked.

It’s not healthy, and it’s definitely a good thing that the relationship ended. Emily insinuating that she needed to know where Ross was at all times and insisting he not hang out with Rachel was controlling and unhealthy behavior.

8. The one where Joey defends his friends.

Joey is fantastic, that’s for sure. And while he definitely has some player-like tendencies, he’s still sweet, loyal, and charming. When Chandler moves out of their apartment, and the cute Australian dancer, Janine, moves in, Joey falls for her hard. Eventually, they start to date, but it doesn’t go too well for him in the end. When they go on a double date with Monica and Chandler, Janine gets pretty crabby and says mean things about Monica and Chandler.

Joey decides to end things with Janine and stands up for his friends. It’s not too big of a plot point, but it’s an important reminder that your friends are the ones who will be there for you when the rain starts to pour.

9. The one where Phoebe wants to get married.

Phoebe and Mike are basically a perfect couple. Their meeting on a fake blind date is a plot line so cute, it’s rivaled only by that of To All The Boys I Loved Before. (I know. Big statement. Huge.) Naturally, after they fall so hard for each other and balance out each other’s quirks so sweetly, it sucks when they eventually fight and break up because Mike says he never wants to get married again.

It’s fair, since he went through a nasty divorce, but it’s also not fair to Phoebe. She never even knew she wanted to get married until she was with Mike, so their fight and breakup was especially heartbreaking to watch. Phoebe just wanted a sense of normalcy in her life, and she thought she had found that with Mike. (Spoiler: She and Mike do get married, so she eventually gets her happy ending.)

The couples in Friends were so much like couples in real life. They bickered, they cheated, they made up, and everything in between. They were human! And while it’s not entirely realistic to compare your relationship to any of theirs, we can learn a thing or two about romance and friendship by paying attention to their love and loss.