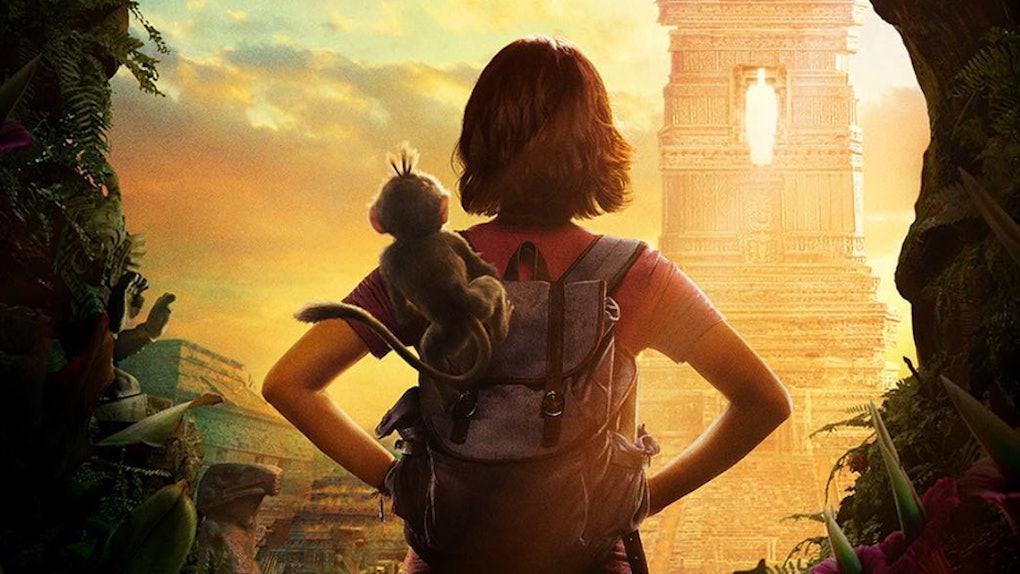 The Live-Action 'Dora The Explorer' Poster Is Here, But Fans Have One Big Question

Get ready for some big adventures ahead, because everyone's favorite explorer is back. Dora the Explorer is hitting the big screen in a live-action movie after years of only existing in animated form. Fans have been itching to see what the pint-sized traveler would look like in three dimensions, and finally they're getting their answer. The live-action Dora the Explorer poster is here, but fans are wondering why one major detail is missing from it.

Whether you grew up watching Dora the Explorer yourself or you interacted with any preschool-age kids in the last 20 years, you probably have some sense of who Dora and her friends are. For those who missed out on the children's series, which ran on Nick Jr. from 2000 to 2014, viewers watched as Dora traveled in search of various objects while talking directly to her young audience in both English and Spanish. She explored with the help of her anthropomorphic friends Backpack and Map, as well as a talking monkey named Boots. In fact, Boots plays a vital role in the series as Dora's trusty sidekick. Fans know and love everything about Boots, including the fact that he gets his name from the iconic pair of red boots he always wears. So, fans were especially alarmed when they noticed one glaring omission in the poster: Boots' boots.

Fans had some hilarious reactions to his lack of shoes:

Other fans pointed out that the missing boots might be part of a much larger movie plot.

While Boots' quest for his red boots would be a pretty captivating story, it doesn't look like that's the movie fans are getting. The movie fast-forwards Dora's timeline and gives her some more grown-up adventures. Instead of being a little kid, Dora will be a teenager entering high school and hanging out with a whole crew of friends. Her adventures have also scaled up in intensity for the big screen. Per People, the plot of the movie, titled Dora and the Lost City of Gold, is:

The adaptation will take the beloved adventurer through the rough-and-tumbles of adolescent crushes and familial relationships — all while solving the mystery of a lost Inca civilization.

The movie poster matches this adult adventure movie feel. On the poster, Dora (played by Isabela Moner) stands with her hands defiantly at her hips as she gazes out at a South American landscape. I'm getting some serious Indiana Jones vibes from the poster, so fans could be in store for a true epic.

The poster does raise one additional question: Will Backpack be a character in the movie? On the TV series, Backpack and Map both had faces and could talk, even though they were objects. In the poster, Dora appears to be wearing a backpack, but it's unclear if it's Backpack with a capital "B." There aren't any eyes on the pack, but maybe he comes to life at some point in the movie?

The Dora and The Lost City of Gold trailer premieres during the Kids' Choice Awards on Nickelodeon on March 23 at 8 P.M. ET. Hopefully fans will get some more answers then.