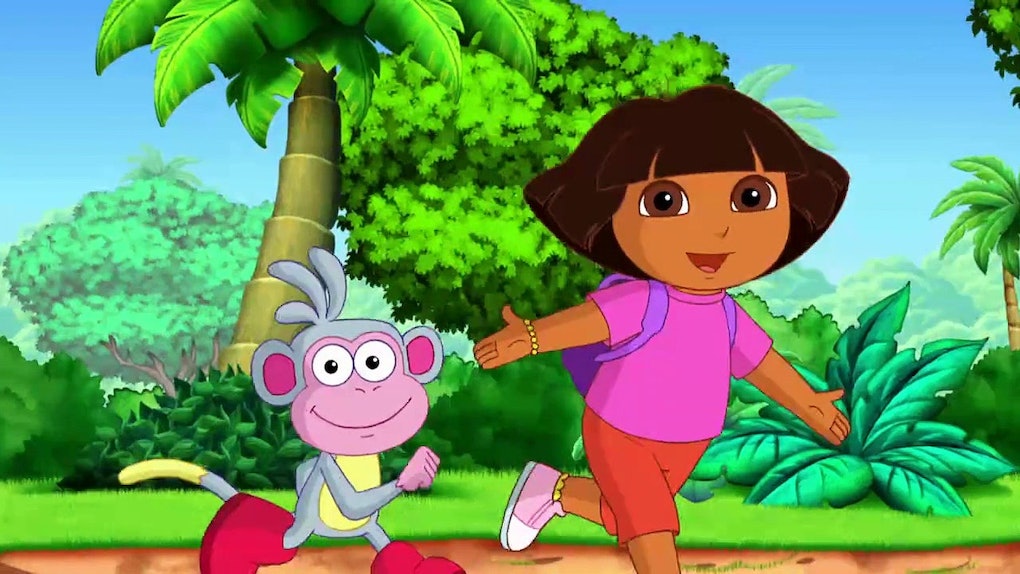 Who Is Isabela Moner? The Live-Action 'Dora The Explorer' Star Is The Perfect Fit

If you're of a certain age, you've either grown up watching Dora the Explorer as a child or with the neighborhood kids you babysat. You've gotten Dora's serenade to her backpack stuck in your head, wondered why her best friend is a talking monkey, and slightly envied the independence she had as a little kid. In case your babysitting charges are still fans of Dora, they'll want to see the upcoming live-action Dora the Explorer movie. The first photo of the title star in costume has been released, so who is Isabela Moner? The 17-year-old looks like a perfect fit for the role.

With previous roles in Sicario: Day of the Soldado and Transformers: The Lost Knight, Moner is reportedly in the pre-production stages of the live-action Dora the Explorer project, which hits theaters in August 2019. Before the release of this photo, the news of this movie sounded like one of those bizarre reports from which nothing actually happens, but Moner dressed in the classic pink shirt and orange shorts combo is all the confirmation we need to know that Dora is seriously hitting the big screen.

Clearly, this isn't the same young Dora seen in the original Nick Jr. series, which ran from 2000 to 2014. According to Entertainment Weekly, the character looking older is intentional. Dora is entering high school in the movie, but along with Boots the talking monkey and her cousin Diego, she'll lead a group of teens to save her parents and solve a mystery tied to a lost Inca civilization. So, the concept is Dora the Explorer meets National Treasure?

In addition to Paramount Pictures sharing the photo of the new Dora, Moner also posted the picture on social media, writing that she was "so excited" to reveal the first look at the character. Born in Ohio to an American father and Peruvian mother, the actress already has a special connection to the Dora franchise, having voiced the character's friend Kate in the spinoff series Dora and Friends: Into the City!. It's obviously time for her to enter the big leagues with this role as the lead character.

In a June 2018 interview with ScreenRant, Moner also spoke about what snagging the role of Dora meant to her, saying:

I watched Dora growing up. I'm bilingual and she's like my icon ... when I read the script, it was so funny. And I think it captured everything that the audience would have wanted to see from that childhood star obviously. And it is a leap from this, but I think versatility is important. And it's up to me to prove to people that I can do it.

Describing the project as "a Jumanji type movie" in an interview with MovieWeb, Moner joins The Muppets director James Bobbin on the film, which begins shooting in Gold Coast, Queensland, Australia. Micke Moreno will play Dora's cousin Diego, who was the focus of his own Nick Jr. series from 2005 to 2011. Overboard star Eugenio Derbez appears as Alejandro, "a mysterious jungle inhabitant who tries to protect the teenagers from the marauders," while Nicholas Coombe, Madeleine Madden, and Temuera Morrison will star as Dora's peers. Adriana Barraza is also locked to play Dora's grandmother, who was often featured in the animated series.

I still have so many questions about this movie adaptation, but for now, it does sound exciting enough for older people to bring little kids to see this in theaters without dying internally. Just in case, prepare yourselves for that theme song playing on a never-ending loop in your heads after watching the movie.

More like this
'Grey's Anatomy' Quotes That Will Heal Your Broken Heart
By Alexis DeCarvalho and Lexi Williams
Netflix's Summer 2021 Movie Release Schedule Will Keep You So Busy
By Abby Monteil
What's Coming To Netflix In May 2021? Lots Of Action & Drama
By Ani Bundel
Stay up to date