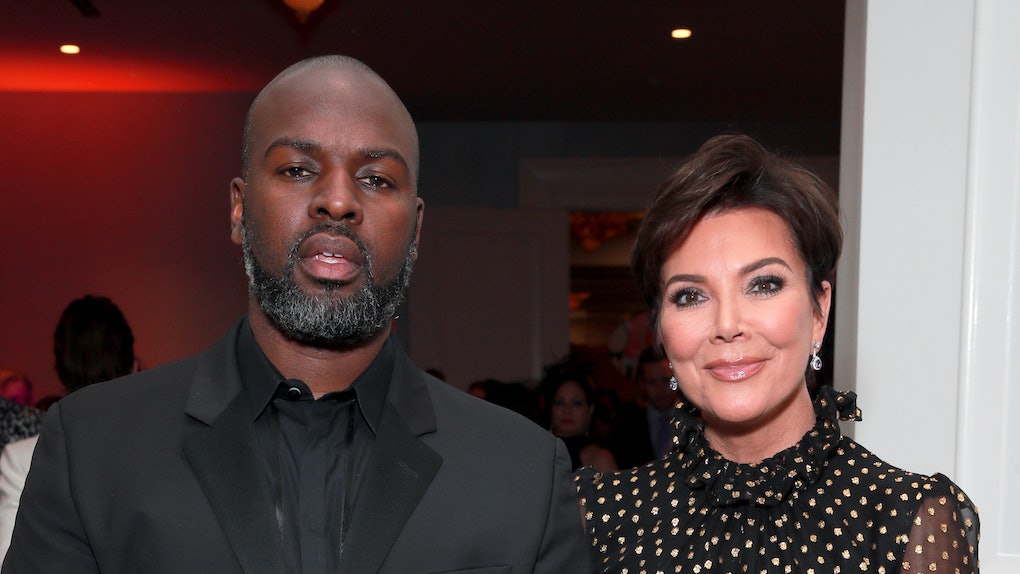 Cosmopolitan reports that Kris and Corey first met at fashion designer Riccardo Tisci's 40th birthday party in Ibiza back in 2014. Super relatable, I know. By 2015, he had made his way onto Keeping Up with The Kardashians as Kris' love interest. You remember the episode — the one where Kim said she couldn't sleep because she heard banging and "moaning" coming from the room her mom shared with Corey. So, yeah, it's safe to say that things were steaming up between the two lovebirds.

But what do Kris' kids really think of Corey? On an episode of The Late Late Show with James Corden, Kris majorly hinted that she and Corey might actually be engaged... which means he may very well be on his way to officially becoming part of the most famous family in the world.

In preparation for their potential holy union and all of the Kardashian/Jenner drama it will cause in future seasons of Keeping Up with The Kardashians, feel free to read the below to find out exactly what each of Kris' children have had to say about her relationship with Corey.

Khloé is happy her mom is happy.

Obvi, some people aren't really excited to see their parents date. And Khloé has had her fair share of beef with her mom's boyfriend on the show. That being said, at the end of the day, Khloé's happy that her mom's found happiness.

"It's weird when your parents date," Khloé told Wonderwall of her mom's relationship with Gamble in November of 2014. "But I'm just happy that both of them are happy and they are in a good space. They should be with someone and be happy. [Corey] is such a nice guy. He's just a really good person. And I just like to see my mom happy, so it's a good thing to see."

Kim has had "fun" watching her mom's love blossom.

Despite complaining about hearing them have sex on an episode of Keeping Up with The Kardashians when they were first dating, Kim is generally pretty supportive of her mom's romance with Corey.

"It's been so much fun just to see my mom happy," she told People in November 2015. "My mom has had such a hard year and I think it's been refreshing to see her have a good time."

Kendall is pretty protective of her mom, but approves.

Kendall went into protective daughter mode alongside Khloé in December 2015 when things were first starting to get serious between him and her mother. Kendall decided to grill Corey during a car ride to Mexico and, unfortunately for everyone involved, he gave some pretty barf-worthy answers.

"What do you and my mom even do together," she asked Corey during a car ride to Mexico.

"We do everything," he responded. "Your mom has got a lot of energy." Yep. He said her mom has "a lot of energy" and I think we all can connect the dots when it comes to what he was alluding to there.

"I feel like being with your mom is better than being with any chick my age or younger," he continued. "I think we do more than you younger girls do."

Luckily, Corey managed to pass Kendall's test. "I genuinely think Corey cares about my mom and loves her," she told the cameras after grilling him. "My mom has been through a lot and to see someone taking care of her and giving her everything she needs is really great."

Kourtney was the first to really accept Corey into the family.

Kourtney was the first of the Kardashian krew to really welcome Corey with open arms. In fact, she was so welcoming to Corey that Kim and Khloé found their one-on-one relationship to be "inappropriate" and "weird."

When Kim confronted Kourtney about it during a May 2016 episode of Keeping Up with The Kardashians, Kourtney came to Corey's defense. "He’s fun, you just need to get to know him better,” Kourtney instructed Kim.

Crickets from Jenner when it comes to her mom's relationship!

Rob's silence on the topic isn't super surprising considering Rob keeps out of the spotlight more than his sisters do.