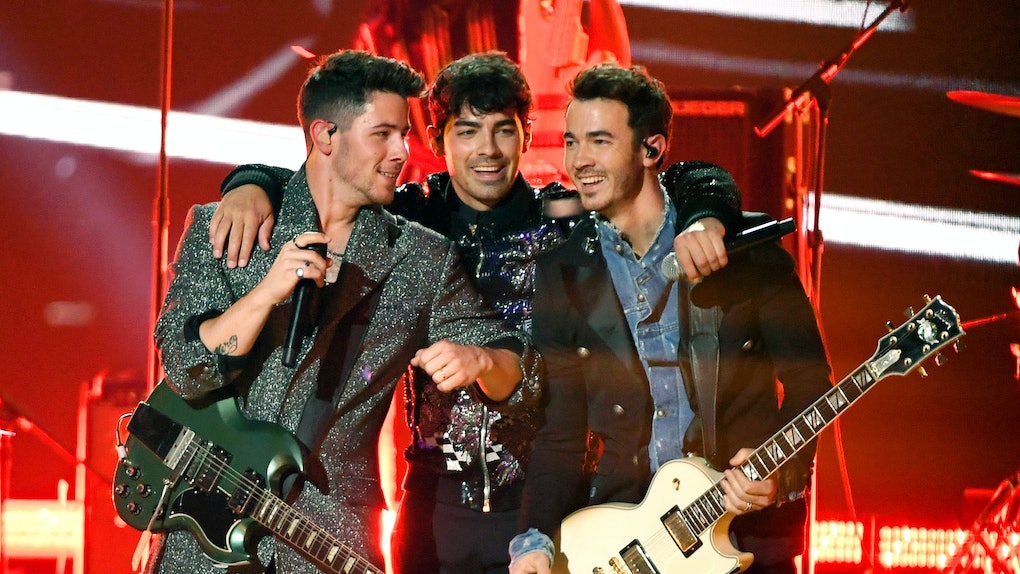 Maybe you really, really love all the Jonas Brothers' latest tracks ("Sucker" is a major bop, TBH). Or, you might honestly prefer the classic hits. Either way, you were probably stoked beyond belief to see them perform during the May 11 episode of Saturday Night Live in all their glowed-up glory. And if you weren't able to watch when it aired, you will be happy to know the Jonas Brothers’ May 11 SNL appearance included both new and OG songs, as well as a surprise cameo in a sketch. In my opinion, they nailed every second of it.

SNL's May 11 episode marked the Jonas Brothers' first time on the show since 2009 (I'm talking "Love Bug" era Jonas Brothers, y'all!). So, it's safe to say their return was a really, really big deal. And while they were solely brought in as the musical guest, alongside host and esteemed actress, Emma Thompson, the famous sibs kicked off the night by unexpectedly making an acting cameo in a sketch called "Judge Court." Yes, you heard that loud and clear, folks — the Jonas Brothers took their first stab at acting since starring in Disney Channel's Jonas — and if you ask me, they totally slayed their acting comeback.

In "Judge Court," the JoBros played defendants who are guilty of committing arson. And while they take full responsibility for the heinous crime, the three judges (played by Kate McKinnon, Emma Thompson, and Aidy Bryant) ended up deciding on a rather unusual sentence — for the Jonas clan to escort them to dinner LOL. If you haven't already watched it a thousand times over, make sure to check it out in its entirety, below.

From there, Thompson introduced the Jonas Brothers as the episode's official musical guests. They took to a balloon-filled stage to perform "Sucker," and IDK about you, but it really felt like a dream come true to me.

Joe, Nick, and Kevin wrapped things up swimmingly. They started playing yet another new track, "Cool," which they slyly transitioned into an oldie that was truly the soundtrack to my eighth grade experience: "Burnin' Up." That's right, y'all — mid-song, Nick shouted, "Let’s bring it back right now," and let me tell you — they definitely brought it. The "Cool"-"Burnin' Up" medley was the musical number of my freakin' dreams, and if you weren't able to catch it live, I suggest watching it right this second. It seriously made my life.

In all seriousness, I'm not sure if I've ever fan-girled so hard as I was when I was watching that. Honestly, that final number was a total game-changer.

As per usual, the Jonas Brothers totally won SNL last night, and I'm proud beyond belief. Between their hilarious (and super unexpected) acting cameo in "Judge Court" and their various musical performances, they definitely went above and beyond. Hopefully this tides me over until their documentary officially comes out on Amazon. Until then, though, I'll probably just rewatch the episode on Hulu all day, every day.

More like this
The 'Glee' Cast's Tribute To Naya Rivera At The 2021 GLAAD Media Awards Was So Moving
By Abby Monteil
'Selena: The Series' Part 2: Netflix Release Date, Trailer, Cast, & More News
By Dylan Kickham
21 Taylor Swift's 'Fearless' Lyrics For Throwback Pics That Belong On The 'Gram
By Rachel Chapman
Stay up to date