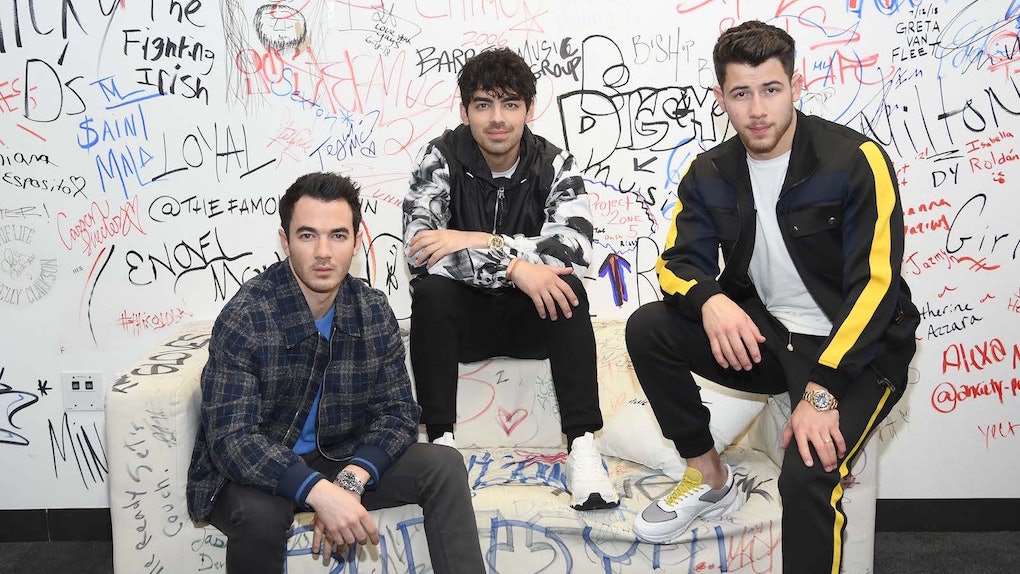 The Jonas Brothers comeback is about to be a full multimedia experience. Fresh off of the group's surprise reunion, the brothers have released a new single, music video, and announced an upcoming tour, and that is not all that they have in store for us. The Jonas Brothers are making a documentary on Amazon, and it is going to be the perfect way for fans to see what really went on when the group broke up and then decided to reunite.

Nick, Joe, and Kevin Jonas shocked music fans everywhere last week when they reunited as the Jonas Brothers, the musicians' pop band that broke up six years ago. The Jonas Brothers were pop juggernauts in the late 2000s music scene, boasting chart-topping singles like "Burnin' Up" and "S.O.S.," but they went their separate ways to pursue solo careers after their 2009 album Lines, Vines, and Trying Times. Both Nick and Joe went on to find continued musical success, Nick as a solo artist leaning more into the R&B and soul genres than the Jonas Brothers did, and Joe fronting the funk-pop band DNCE.

It was looking like the Jonas Brothers were officially a thing of the past, until the three brothers announced a new single "Sucker" would be their first new Jonas Brothers release in six years. They released a music video for "Sucker" shortly after announcing the song.

Of course, Jonas Brothers fans are overjoyed at this reunion, but many probably still have a lot of questions. What exactly caused the band's breakup in the first place, and why is the reunion happening now? That's what this new documentary will answer. Nick Jonas explained in a recent Beats 1 radio interview that the upcoming documentary will go into more detail about the group's breakup and recent reunion, as well as how the fans have impacted them:

It’s going to give people a look into who we are as a family, as brothers and — oh yeah — we were also the Jonas Brothers at one time, then we weren’t, and now we are again. So you kind of get the full range of our life story plus our family’s perspective on everything. Also, a big factor in this too is the fans and what they’ve meant to us. I think it’s going to be something we look back on in 20 years and we were able to show our kids and be really proud of the growth we’ve had.

Even the most hardcore Jonas Brothers fan probably still has some questions about the group's breakup. The band first went on hiatus at the end of 2009, stating that they wanted to pursue solo careers, but then briefly reformed in 2012 to record a fifth studio album. That album, which was going to be titled V, wound up never being released. Instead, the Jonas Brothers released a live album of their hits called Live, which featured two new singles that would have been on V. The group then broke up again.

This new Jonas Brothers documentary should finally give the fans all the answers they've been wanting. Unfortunately, Amazon has yet to reveal the release date, so we will just have to wait to see when more details come out.