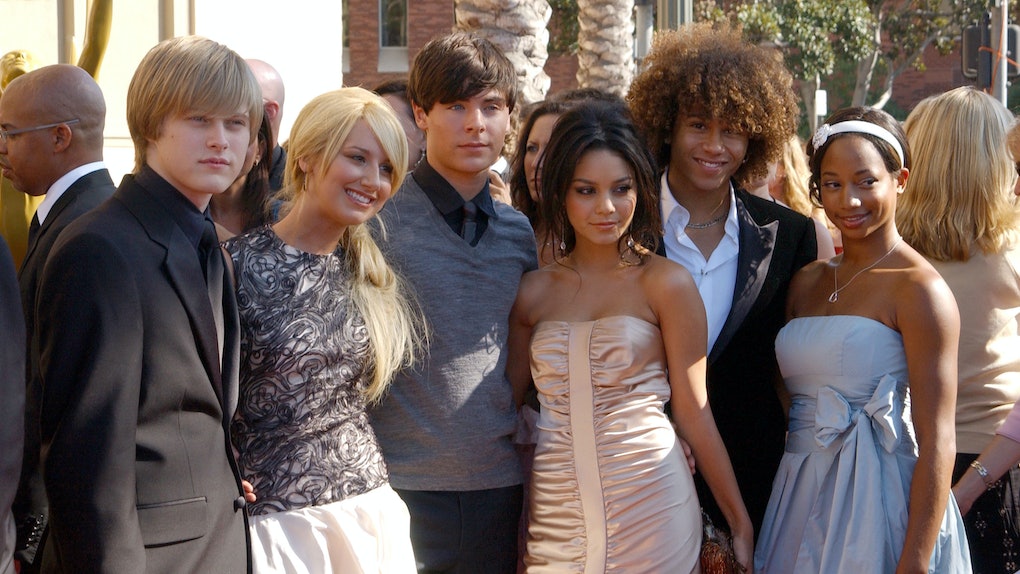 High School Musical fans, get ready for a blast from the past. The cast of the hit movie series reunited for a super nostalgic party on Zoom while on lockdown during the coronavirus pandemic, and the internet is going wild. The High School Musical cast's Zoom reunion will remind you that we're all in this together.

Vanessa Hudgens shared a picture from the epic reunion on Saturday, April 11, along with the caption, "Guess who's back..." During the video hangout, Hudgens reunited with Corbin Bleu, Ashely Tisdale, Lucas Grabeel, Monique Coleman, director Kenny Ortega, among others. Unfortunately, fan-favorite cast member Zac Efron wasn't in attendance.

Naturally, fans went wild seeing their favorite Wildcats all together. Instagram user @eunicelee0926 wrote, "Luv you guys till the end of the line," and user @eviewills_ said, "I am literally watching HSM 3 while seeing this post." Many fans also inquired about Efron's whereabouts.

The High School Musical stars have been keeping busy while staying at home. On March 16, Tisdale shared an entertaining TikTok video of herself dancing to "We're All in This Together" while in quarantine. She captioned the video: "My work out while on Self Quarantine. I can't believe I remembered it." Though it's been 14 years since High School Musical's initial release on Disney, Tisdale nailed the routine as she channeled her inner Sharpay Evans.

After Hudgens saw Tisdale's dance, she used TikTok to share a video of herself alongside Tisdale's own video for a virtual performance. Instead of busting out the moves, however, Hudgens sang while pouring a glass of wine. "Well. It’s come to this. Lol @ashleytisdale maybe I start getting into tik tok? Username is vanessahudgens not vanessahudgens0 okay byeeee," Hudgens wrote on Instagram.

Many other celebs have been entertaining their fans from the comfort of their own homes. Joined by his wife, Chrissy Teigen, and daughter, Luna, John Legend held a live concert on Instagram Live. The family even belted "Beauty and the Beast" together for a heartwarming family sing-along. Coldplay frontman Chris Martin also held a mini gig on Instagram Live. Since plenty of stars giving virtual performances, there's no reason to miss out on the fun while at home.

Plus, the time at home has allowed a lot of beloved casts to reconnect virtually. This High School Musical reunion came just weeks after the cast of Victorious posted about their own Zoom reunion. Here's hoping these casts inspire more nostalgic reunion posts.

More like this
The Best Movie Soundtracks Were So Good, They'll Live On Forever
By Brandy Robidoux
The 'Space Jam: A New Legacy' Trailer Will Bring Back All Your Childhood Memories
By Cianna Garrison
'He's All That': Premiere Date, Cast, Trailer, Filming News, & More
By Dylan Kickham
Stay up to date