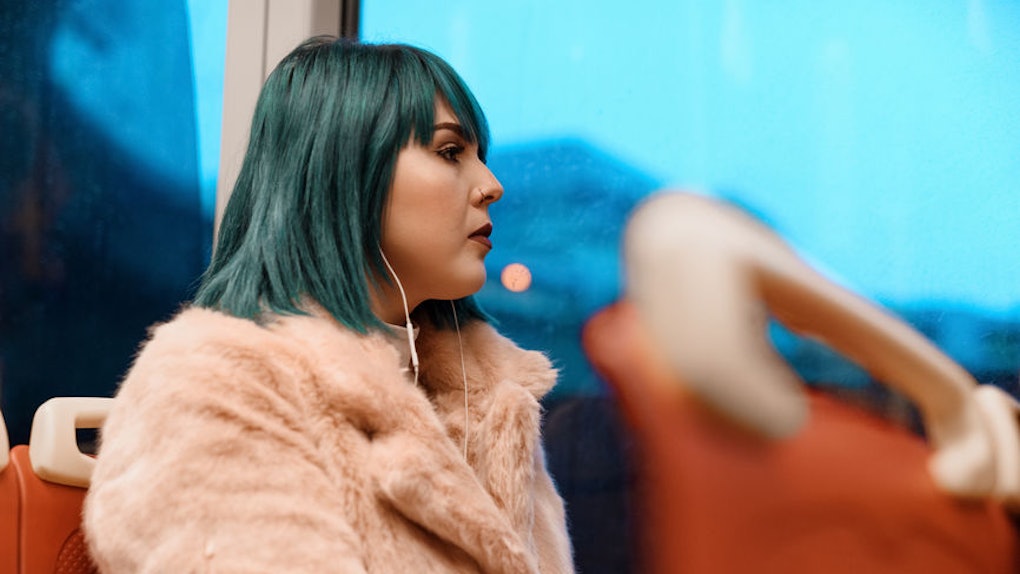 The Health Benefits Of Nature Are Even More Powerful During Your Commute, Study Shows

Every time I've had a job that required me to commute to an office every day, I really treasured the time I spent in transit. Because I've been lucky enough to live in cities with plenty of parks and green spaces, I've always loved watching nature fly by during a long bus ride. Apparently, my body knew what it was doing when it caused me to crave the sight of trees and greenery before spending the work day inside. According to the results of a new study, the health benefits of nature are pretty powerful, and they're especially great to reap during your daily commute.

Published in the scientific journal Environment International, the study surveyed roughly 3,600 people about their commuting habits and their mental health, according to ScienceDaily. The results showed that people whose commutes take them through a natural environment tend to report more positive mental health overall than those who don't commute through nature. While all natural settings were found to have a positive impact on mental health in the study, the researchers discovered that commuting activities like walking or biking through nature-rich areas may be even more beneficial for a person's mental well-being.

Of course, if you don't live in a rural environment or, say, near a huge park, that doesn't mean you can't reap the benefits of nature, too. According to the study, even passing by street trees can have a positive impact on your mental health, as can walking alongside a river on your way to work.

As per ScienceDaily, Wilma Zijlema, a researcher at the Barcelona Institute for Global Health and first author of the study, explained in a statement that more research is needed to better understand the relationship between nature and mental health. For now, Zijlema said, "our data show that commuting through these natural spaces alone may...have a positive effect on mental health."

Clearly the mental health benefits alone of taking a walk outside are significant, but spending time in nature can also do wonders for your physical health. For instance, a study published in the medical journal Environmental Health and Preventative Medicine found that, after a group of 13 participants between 25 and 43 years old spent three days (two nights) in "forest areas," according to the research, their immune systems seemed significantly stronger. So, even if you only have a day every few weeks to go on a long hike, you could see these same results, as the researchers involved in this particular study found that the participants' immune system health benefits lasted for 30 days after the fact.

In case you don't know, spending this kind of time in nature is sometimes referred to as "forest bathing," and even though it sounds like some fancy health trend you can't get in on, it really just means being mindful and present when you're surrounded by nature — aka something that literally anyone is capable of doing. What's especially awesome about forest bathing is that, according to a study published in the International Journal of Immunopathology and Pharmacology, being in nature like this could help your body fight disease. In the study, after 12 healthy men from Japan (all of whom were between 37 and 55 years old) spent a few hours over a weekend walking in forests, their blood showed increased levels of anti-cancer proteins, thus demonstrating the disease-fighting benefits of this simple wellness habit.

So, are you ready to make nature a more regular part of your daily routine? An easy way to switch things up is to commute by bike or by foot, if possible. If you live too far from work or school for that to make sense, though, consider getting off of public transportation a stop or two before you need to, and just strolling the rest of the way.

Or, if you usually meet up with a co-worker for lunch in the middle of the day, consider making it a picnic. Grab your food to-go (or pack some tasty leftovers from home), and head to the nearest spot of greenery to fuel up and give your brain some time to recharge.

More like this
May 11, 2021 Will Be The Best Day This Month For Leo, Especially In Your Career
By Chelsea Jackson
HomeGoods' Hideout Contest Treats You To A Relaxing Solo Getaway & Free Merch
By Marisa Casciano
Your Favorite Way To Escape From Reality, As Told By Your Moon Sign
By Roya Backlund
Stay up to date