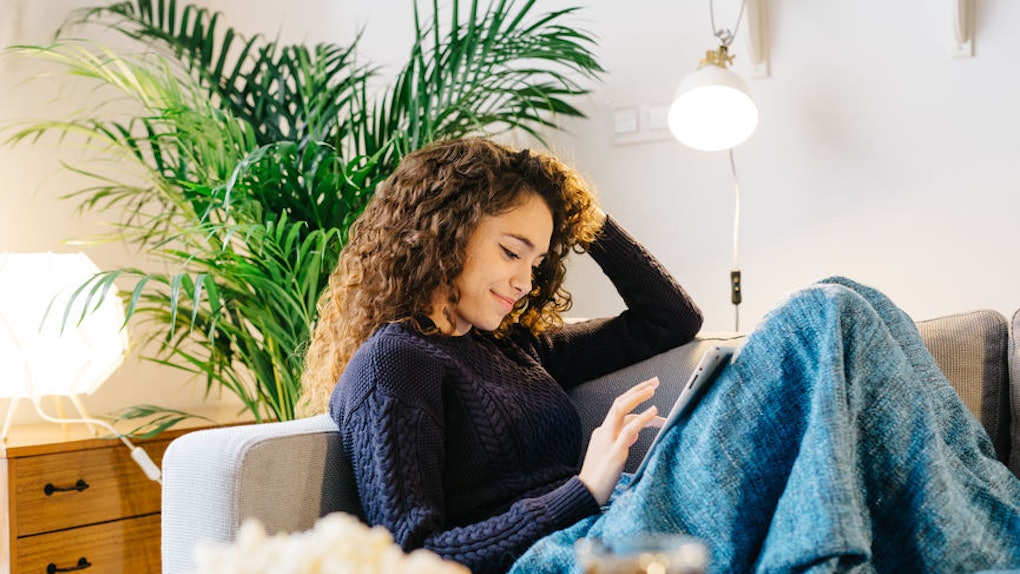 The Health Benefits Of Being Lazy Might Help You Live Longer, Study Says, So Chill Out

You’re a millennial, which means you probably watch Netflix and literally chill like it’s a profession. A glass of rosé and comfy sweats on a Friday night sounds so much better than getting boozy on $12 cocktails at a crowded bar, and hitting brunch with your squad instead of pounding the pavement in a pair of running shoes on a Sunday morning is definitely more your style. Some might see these things as antisocial or just plain lazy, but new research suggests those leading a low-key lifestyle may be onto something. There are real health benefits to being lazy, despite what the #fitfam might think. Of course, getting your body moving is still important in its own right, but new research claims letting yourself be a little lazy more often might actually help you live longer. In other words, don’t feel bad if you’re just not feeling cardio this afternoon; rest days are just as healthy.

You’ve heard of Darwin’s “survival of the fittest” theory, right? In that, the strongest in a species will persevere? Well, let’s just say Darwin’s theory could be debunked in the near future, because as of late, scientists are toying with the phrase to read something along the lines of “survival of the laziest.” Now, you might be skeptical, and trust me, I was, too — the image of a 20-something lounging around in their pajamas all day picking cereal out of a box doesn’t exactly scream success. However, a team of researchers from the University of Kansas and Oxford University are convinced that the key to living a long life might lie in the art of taking a load off, and I don’t know about you, but I’m very much here for that.

Being a member of the #fitfam is almost as trendy as drinking pumpkin spice lattes in the fall these days, and that’s not necessarily a bad thing. After all, exercising on a regular basis is good for your health, so if you genuinely enjoy dedicating your free time to lifting heavy or getting your sweat on, more power to you. But, if you don’t enjoy exercising, you shouldn’t feel guilty about your reservations — it’s not for everyone, and maybe you just haven’t found movement that makes you feel your best. But, just in case you were looking for some added justification, newfound fossil data is suggesting laziness could lead to a longer lifespan, so go ahead and let your hair down, put your feet up, and relax, girl.

According to a report published by the The University of Kansas, while analyzing fossils dated back to 5 million years ago up until the present day, researchers zeroed in on nearly 300 different species’ metabolic rates, aka the amount of energy they would need to survive from day to day. Looking at this data alone, researchers found that species that required more energy to survive were more likely to die out quickly, while species whose energy levels stayed low were more likely to thrive. In other words, you can essentially chill or be chilled, my friend.

Of course, this kind of information is still preliminary, so the authors of the study are categorizing their results as a generalization. Clearly, there are some health benefits that come with being lazy, but laziness itself isn't the end-all-be-all to living a long, healthy life, meaning you should still make it a point to get at least a little active, in some way, on a regular basis. "You can't just decide to be lazy as an individual and expect to live longer," Luke Strotz, lead study author and postdoctoral researcher at Kansas University's Biodiversity Institute and Natural History Museum, told CNN. So the question is, what’s the happy medium?

According to certified trainer and fitness personality Katie Austin, working in anywhere from 30 to 40 minutes of exercise every day is ideal. "I never work out for over an hour, unless it's 90-minute yoga," Austin tells Elite Daily over email, adding that, while choosing not to exercise at all can lead to health issues somewhere down the line, over-exercising can also be problematic. "If you're working out too much, it can be really hard on your body," she says. "Your body needs rest and recovery."

Bottom line: You can be lazy, and you can be active, but balancing the two seems to be the key to feeling your best. And this doesn't necessarily mean you have to force yourself to do things you don't want to do. For instance, if you hate running, you don't have to sign up and train for a 5k just because you think it's going to be good for your health. Maybe for you, getting active simply means taking the stairs instead of the elevator, or getting up from your desk to stretch every few hours. Listen to your body and honor it — if that means scheduling a sweaty gym session three times a week, that's great. But if Monday rolls around and all you want to do is veg out on the sofa, do you, boo. Science says it can't hurt.