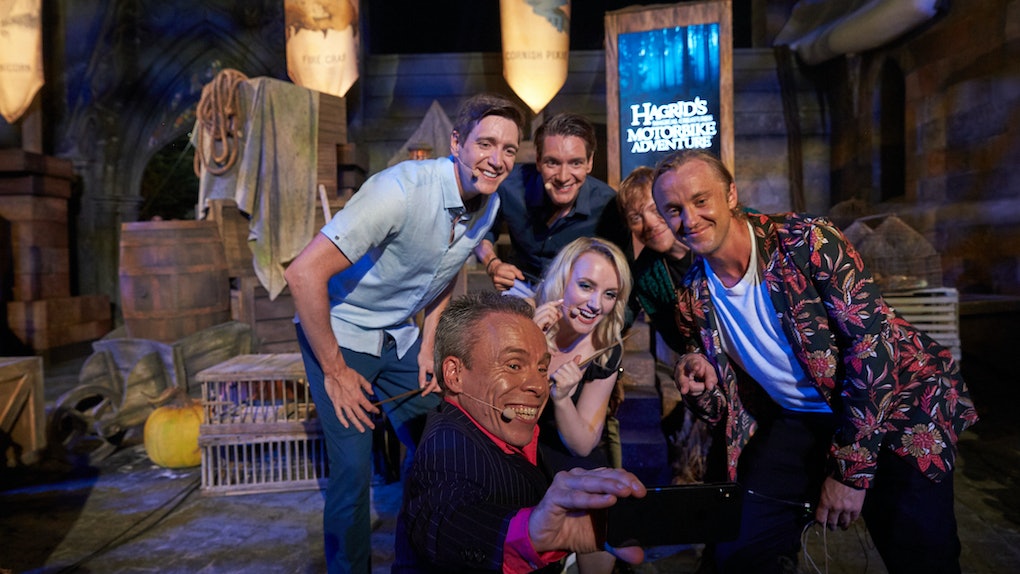 I think it's pretty safe to say most Potterheads out there (myself included) were totally and utterly shocked by the end of Fantastic Beasts: The Crimes Of Grindelwald. Even the most dedicated fans weren't able to foresee J.K. Rowling's highly unexpected twist pertaining to Dumbledore, and based on these conversations with cast members from the first eight movies, it seems as though they were shocked, too. That's right: The Harry Potter cast's reaction to Fantastic Beasts' Dumbledore twist is as astonished as yours likely was.

If you aren't completely up-to-date on the Fantastic Beasts franchise, let me bring you up to speed. At the end of the first movie, the Obscurial — which is the host of an Obscurus, a magical parasite that plagues wizards who suppress their magical ability — named Credence Barebone (Ezra Miller) survives, despite apparently being defeated by Newt Scamander (Eddie Redmayne), No-Maj Jacob Kowalski (Dan Folger), Auror Tina Goldstein (Katherine Waterston), and Queenie (Alison Sudol). The second movie starts with Credence going on a mission to find his birth family, and he finds out that he was unknowingly swapped out for another baby by his sister, Leta Lestrange (Zoe Kravitz), while traveling by ship with his family.

Credence eventually meets up with Grindelwald (Johnny Depp), who informs him that Credence's real name is actually Aurelius Dumbledore. He also brings up the fact that his brother, Albus Dumbledore, is trying to defeat him. So, Albus Dumbledore has a secret brother who he might be totally unaware of, and it was totally unexpected.

It seems as though the cast from the original Harry Potter series was shocked by all of it, too. I spoke with members of the original Harry Potter cast when they were at Universal Orlando for the opening of the Hagrid's Magical Creatures Motorbike Adventure, and they have some thoughts about that Fantastic Beasts plot twist. When I bring up the ending to the actress behind Luna Lovegood, Evanna Lynch, she expressed pure disbelief.

"I don’t think anyone saw the twist at the end of Crimes Of Grindlewald," Lynch says. "We did DVD commentary for it, and we noted there was no hint at all in the books. Fans couldn’t have guessed it, and I was properly flabbergasted."

And while this plot line definitely came out of left field, Warwick Davis (who played Professor Flitwick, a Goblin bank teller at Gringott's, and Griphook) pointed out how remarkable it was on Rowling's part, that she was able to seamlessly tie in so much else that was happening in the Harry Potter world before the original series happened.

"It’s interesting. With those films, there’s more to this whole magical world," Davis shares. "The writers explore other areas that have been hinted about in the books and films, but you start to learn more about them and the entire expanded universe. It’s really exciting."

While the ending was — devastatingly — spoiled for one half of the Weasley twins Oliver Phelps, he tells Elite Daily it was interesting to not be able to see what was coming, like he could in the movies with the use of the script and the already-written books.

"I guess I kind of heard spoilers, so I kind of knew, but it was so interesting to see that other side of the story. Because when we were filming we had the scripts and the books, so we always knew who was going to die," Phelps explains. "So, it was interesting to do things from the other side."

Similarly, the ending was ruined for Tom Felton (Draco Malfoy), too. But, it came as a surprise nonetheless.

"Someone actually ruined it for me — I forget who, but they hinted it and it came as less of a shock to me," Felton explains. "But yeah, I definitely didn’t see that coming."

Rupert Grint, on the other hand, reveals in on-brand Ron Weasley fashion, "I never saw it! I will watch it, I’ll get around to it." LOL.

So, there you have it. None of the original HP cast predicted Dumbledore's twist at the end either, so you definitely weren't alone there. And if you need me, I'll just be perusing Reddit theories until the end of time... or at least until the next movie comes out.