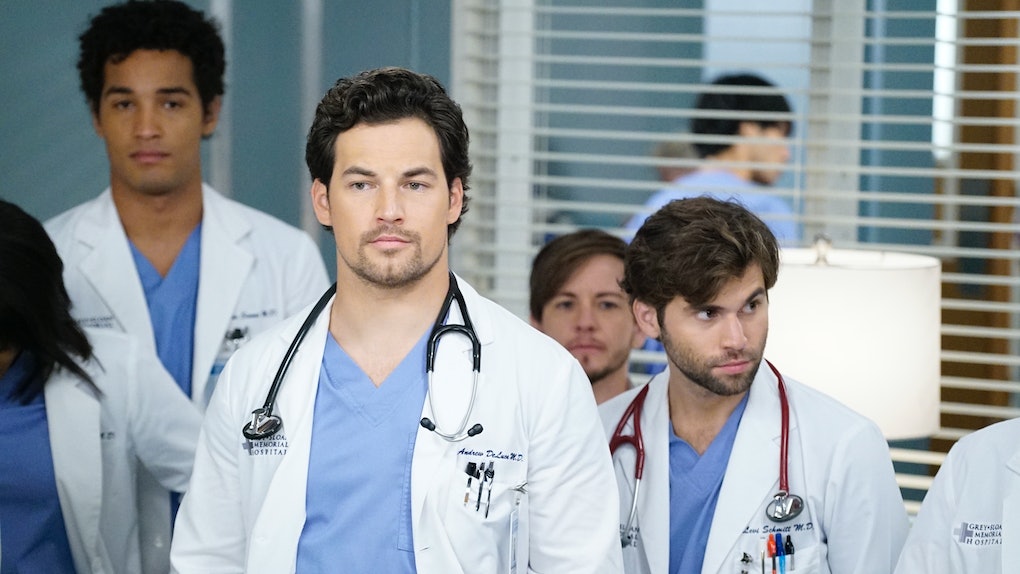 Grey's Anatomy is notorious for pulling out all the stops in its finales, so it shouldn't come as too much of a surprise that the Nov. 21 episode — the last one before the show's winter hiatus — is getting set up to be a doozy. Indeed, the Grey's Anatomy Season 16 fall finale promo starts off on a happy note, but quickly lets viewers know things are going to get rough in the episode. If you know what's good for you, you'll be prepared for a handful of heavy moments as the series says a brief farewell.

Warning: This post contains spoilers for Season 16, Episode 8, "My Shot." The end of the Nov. 14 episode featured a rare, coveted moment of happiness for almost all of the main Grey's cast. Sure, Koracick (Greg Germann) lost a patient on the operating table, but the guy who died was the doctor who couldn't save Derek Shepherd's live. And yeah, DeLuca and Meredith's relationship might be over, but Mer's medical license hearing went well — resulting in her keeping her medical license, making up with Bailey and getting her job back.

But real Grey's fans know this happiness cannot last. Whenever something good happens on this show, it's usually followed by a series of shocks and tragedies, so that's what audiences should be ready for.

Check out the synopsis and promo for the fall finale, titled "Let's All Go to the Bar."

Jo becomes a safe haven volunteer and gets a call that a baby has been dropped off at Station 19. Meanwhile, Meredith moves forward with her life after facing the medical board. Jackson takes a big step in his budding romance with Vic, while Bailey and Amelia swap pregnancy updates.

TBH, the synopsis and the video kind of seem like two separate shows, but that's probably just due to the sheer number of storylines the episode is going to have to follow. It's unclear how any of the featured characters are going to fare in this midseason finale; the only thing that is certain is that the collective joy surrounding Meredith's return to Grey Sloan isn't going to last very long at all.