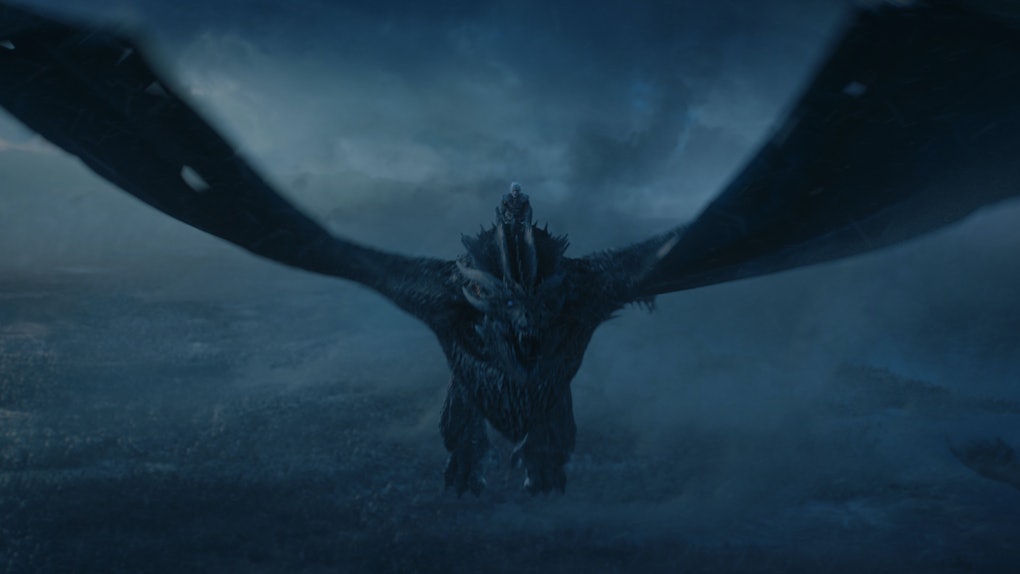 Game of Thrones Season 8 is somewhere between four and nine months away, depending on when in 2019 HBO decides to premiere the final six episodes. So far, the series hasn't even released a promotional photo or a proper trailer for the last season. Rumor has it work on post-production has barely begun, so what little footage they have to show needs to be stuff that doesn't need CGI. This explains why the first Game Of Thrones Season 8 trailer footage from the HBO "Coming Soon" promo reel is mostly from Season 7.

As noted by nearly everyone last week, the only "new" clip inside the Coming In 2019 promotional stuff was Jon and Sansa in an embrace. If it was the two of them greeting each other upon Jon Snow's return, or if it was a goodbye hug as Jon and company take off to face the Night King's army is still up for debate.

There's also the question of who Sansa is looking at in the clip since her eyes look hard and unreadable. Is she looking at Dany and her dragons? Or is she looking at someone else? Perhaps she's looking at Arya, about to leave as well, or Bran, who can see all future outcomes.

Whatever Sansa is looking at will have to wait, as well as if Jon Snow's hug is him arriving or leaving. One thing is sure: This hug is a prelude to the end.

When Jon Snow finds out his real name, and his destiny, he's not going to run from it. If this is Sansa embracing him knowing Bran is about to tell Jon everything about his life he's believed is a lie, then her look makes sense. Jon was already willing to lead his army against the Night King on Daenerys' behalf. Knowing he's doing it as their leader will only redouble his resolve.

If this is Sansa hugging Jon goodbye, that's even harder. Fans who have been paying attention to the scant spoilers out of Season 8 this year know they filmed two primary battle sequences, one set in the North and one set in King's Landing. Both took weeks to shoot, and as far as anyone knows, both include Jon Snow as part of the action.

The one in King's Landing was done mostly on closed sets, so little is known about it, other than the walls of the Red Keep will be destroyed by something fans are guessing to be a dragon attack. But the up North, it has been suggested, will be the biggest battle Game of Thrones has ever staged in the history of the series. If they pull it off, and there's no reason to think they won't, it will be the biggest battle staged in the history of television.

If Sansa is sending her eldest living brother to fight in a battle of this magnitude, knowing he might never return, this would certainly explain her expression. Even more so knowing if he does return, he'll be someone else: Aegon Targaryen.

Game of Thrones Season 8 will return sometime in 2019.

More like this
This 2021 'Game Of Thrones' Season 8 Trailer Is So Confusing... & So Good
By Ani Bundel
In 'Riverdale' Season 5, Toni Topaz Is The Black Superwoman Without A Cape
By Erika Hardison
'Ginny & Georgia' Season 2: Release Date, Cast, Trailer, & More Info
By Dylan Kickham
Stay up to date