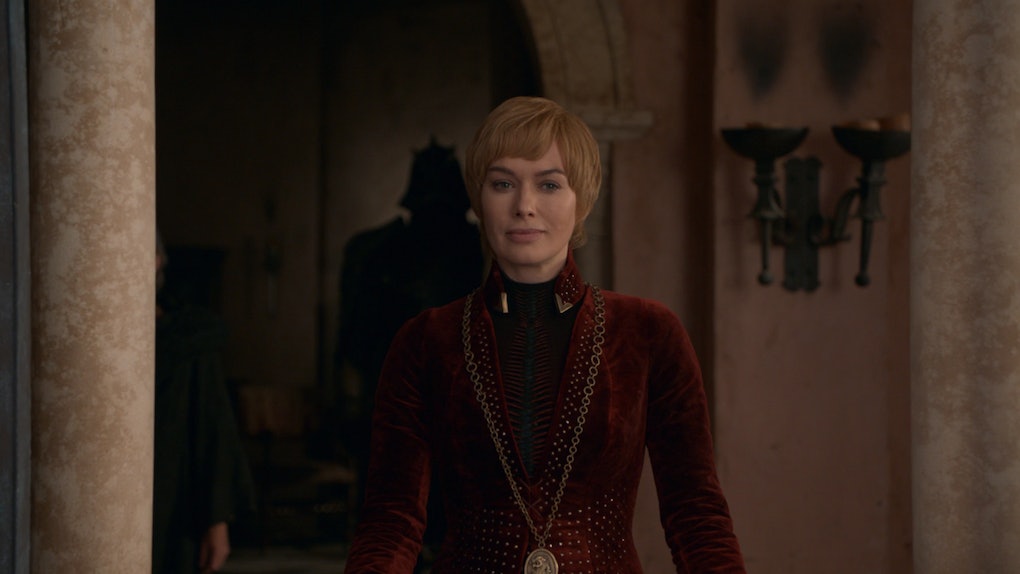 The final season of Game of Thrones is not only giving us one massive battle, but two. Last week, everyone in Winterfell stood up against the Night King's army of the undead, and now, they are about to go up against Cersei Lannister. The Game of Thrones Season 8 Episode 5 promo promises that next week's major battle at King's Landing will be an epic one.

Spoiler alert: This post contains spoilers from Game of Thrones Season 8 Episode 4. Although many fans were expecting the big battle against Cersei to be at the center of this week's latest episode, the new episode was really more focused on getting everyone in place and building up to the fight in next week's episode. The teaser promo for the upcoming episode does not reveal much, but we do see all of the main characters starring in silence at the battlefield. Drogon's screech in the final moment seems to be teasing that we will see Dany's last remaining dragon get vengeance for his fallen brother by attacking Euron Greyjoy.

Basically, this teaser promo just shows fans a handful of clips of everyone preparing for a major battle, so we do not get any real specifics, although it does confirm that the fight we have all been waiting for will finally be here next week and will likely be the bulk of the episode. And that should come as no surprise following the shocking final scene of this week's latest episode. In the last moments, the advisors around Daenerys and Cersei try for one final last-ditch effort to somehow avoid an all-out war in favor of diplomacy... but obviously, that was never going to work. Instead of talking things out, Cersei effectively starts the war by executing Daenerys' trusted advisor Missandei right in front of her. Of course, this makes Dany incredibly angry, and the last image we see is Dany's enraged face as she stomps off to prepare to war. And something tells me that she is about to give Cersei more firepower than we have ever seen from her before...

Although we do not see Daenerys in the promo for next week's new episode, it is safe to say that she will probably be the most important character in the upcoming battle. Not only did Cersei just kill Dany's closest friend, but earlier in the episode, Euron Greyjoy shocked everyone by managing to kill Dany's dragon Rhaegal. To add it all up, Dany has lost two of her dragon-sons and two of her closest friends (Jorah and Missandei) over the course of a couple days... so it is safe to assume she is major pissed off right now.

All of this rage is also sparking fan theories about Daenerys' future. Some fans think that Dany may unleash a scarily violent vindictive side during this final battle, considering how angry she is going into it. But as we have already seen from Varys and Tyrion's conversion this week, there are already a number of people who are not super into the idea of Dany taking the Iron Throne. Could Daenerys follow in her father's footsteps and become another Mad King during the course of this upcoming battle? We will find out when the penultimate episode of Game of Thrones airs on Sunday, May 12 at 9 p.m. on HBO.