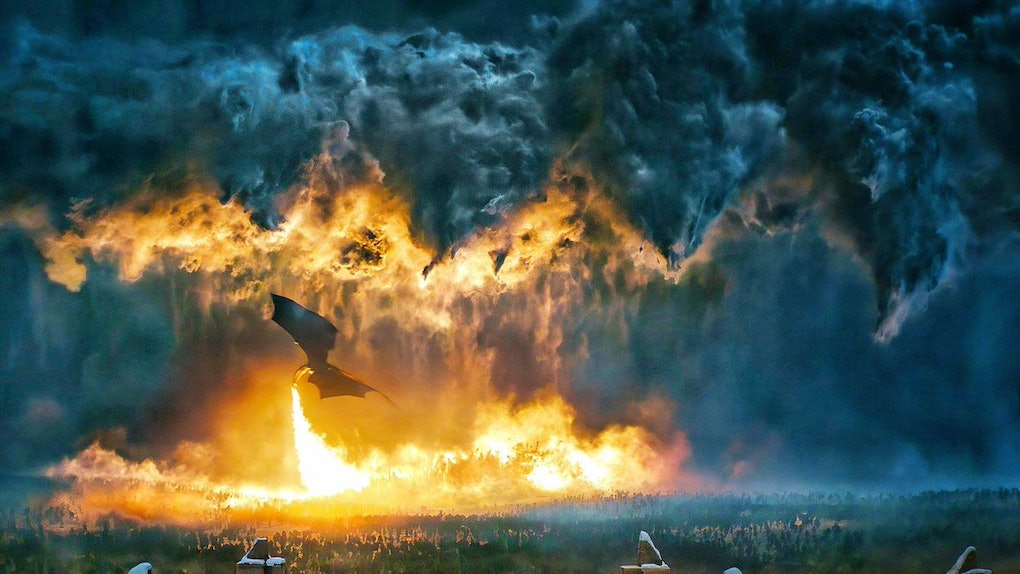 Fans knew going into the massive Battle of Winterfell in Game of Thrones Season 8's "The Long Night" things would get dark. I don't mean "dark" as in depressing or terrible or the forces of good losing to the Army of the Dead. I mean "dark" as in no one can see anything. It was a running joke on Twitter all week. Then the episode arrived, and it wasn't funny anymore. There were literally scenes too dark for most to see. These brightened scenes from Game Of Thrones Season 8 Episode 3 prove the show shouldn't have gone naturalistic with the lighting. There were gorgeous shots hidden in the episode because of it.

The show's decision to go naturalistic was understandable. Part of the point of the episode was the horror of war, and how hard it can be to see the enemy. (In some spots, not being able to see the enemy makes it more terrifying.) The Night King attacks at night, and worse, he brings a snowstorm wherever he goes. Visibility was going to be reduced, and anyone who didn't need to be on the roads should have stayed in the crypt so emergency services could help those who were trapped.

But Helm's Deep in Lord of the Rings was at night in the rain, and everyone could see just fine. What happened?

The small screen happened. It would be one thing to show this episode in IMAX on a large screen. There's simply more light projected because of the size. Even large scale TVs just aren't that large. For anyone streaming on a computer monitor where pixelation is a factor, scenes were just a black blur, causing audiences to miss moments like this one:

When you look at the comparison and see how much better it is with the brightness turned up, it makes you want to see the whole episodes done that way. The scenes in the clouds were the worst offenders. The combination of the dark night, the snow, the fog, and the speed of the dragons flying made it very hard for those watching at home to follow along until someone fell out of the sky.

I, for one, did not realize how viciously Viserion was tearing at Rhaegal until I saw this clip. As someone who views the dragons the same way I do my cats, this entire sequence became far more emotionally distressing once I could really see how horrifying it was.

But the clouds scene wasn't the only one improved by turning the brightness up. Check out this one from the underground, when the crypts suddenly stop being the safest place in Winterfell.

Did you realize that was Ned Stark's crypt Sansa ran and hid behind? I thought it might have been, but couldn't be sure. Now everyone knows when the going got tough, Sansa ran to Ned.

Eventually, these brightened scenes will all make their way to YouTube, and maybe fans can piece them together. But personally, I hope the episode gets released in theaters where audiences can see it on the big screen — really see it — as it was meant to be shown.