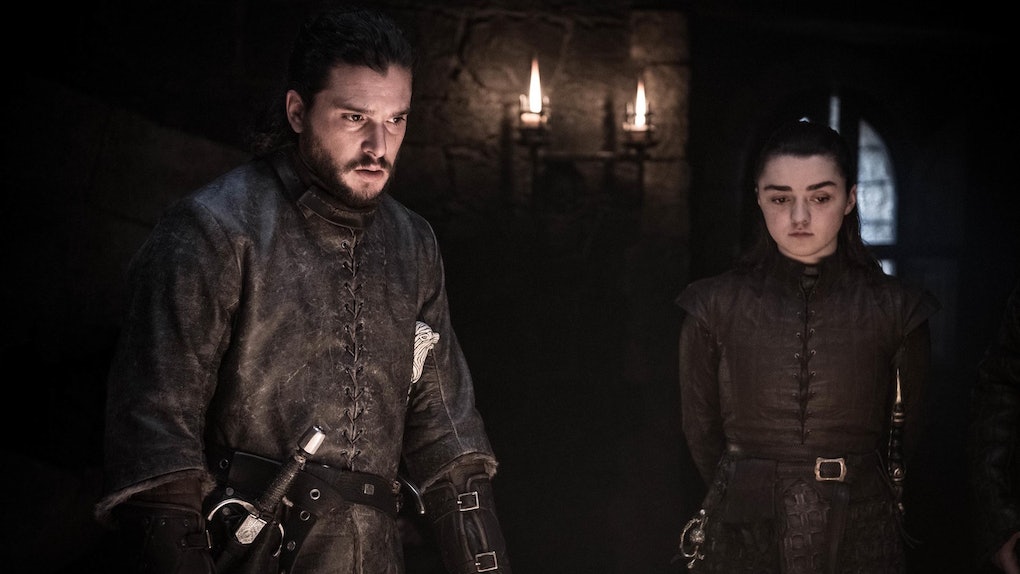 Another week of Game of Thrones down means that we are closer than ever to the fast-approaching series finale. Now that Episode 2 of Game of Thrones' final season aired on Sunday, April 21, we are officially one third of the way through Season 8, which consists of only six episodes. But don't let the fact that the series is nearly over get you down — fans still have the most exciting episodes of the entire show to look forward to. In particular, the Game of Thrones Season 8 Episode 3 promo that aired after Episode 2 ended promises that next week's episode will be the biggest the show has ever seen.

Spoiler alert: This post contains spoilers for the second episode of Game of Thrones Season 8. Throughout the entirety of the final season's second episode, everyone was worried about the Night King's impending arrival at Winterfell, and the Episode 3 promo made it explicitly clear that next week's episode is all about the big, climactic battle that fans have waiting the entire series for. The action-packed promo barely included any dialogue, but it did show a ton of quick scenes from the battle between humanity and the White Walkers, revealing that the fight will likely take up pretty much all of next week's episode.

Game of Thrones superfans have actually been looking forward to Season 8, Episode 3 for quite some time. Last month, HBO confirmed the episode lengths for each of the six episode that comprise Game of Thrones' final season, and surprisingly, the series finale episode is not even the longest one. Actually, Episode 3 will be the longest episode in Game of Thrones history, clocking in at a whopping 82 minutes.

Yep — that is a full one hour and 22 minutes of consecutive, commercial-free Game of Thrones. The episode will be almost exactly double the length of a network hourlong episode's standard runtime, approaching a length closer to a feature film than an episode of television. In fact, HBO execs have even teased that the final season of Game of Thrones feels like six movies rather than six TV episodes.

The enormous length of Episode 3 quickly led fans to theorize that this might be the episode where we see humanity go to war with the Night King's army of White Walkers. And Episode 2 seemed to confirm that, as Tormund tells Jon Snow that the Night King's army is only a day away from Winterfell. Although this all-out battle may have felt like it should be in the series finale to some fans, considering the battle is a big part of what the whole show has been leading up to, it appears as though we will be seeing it next week. And that brings up a very exciting and mysterious question: What will the final three episodes of the series be about if the climactic Night King battle happens halfway through the season? It is anyone's guess at this point.

Season 8, Episode 3 of Game of Thrones will air on Sunday, April 28 at 9 p.m. ET on HBO. Judging from Episode 2's drama, you don't want to miss what's coming.

More like this
The 'This Is Us' Season 5, Episode 13 Promo Promises Some Brotherly Love
By Ani Bundel
The 'Grey's Anatomy' Season 17, Episode 12 Promo Teases A Huge Bailey Bombshell
By Abby Monteil
This 2021 'Game Of Thrones' Season 8 Trailer Is So Confusing... & So Good
By Ani Bundel
Stay up to date