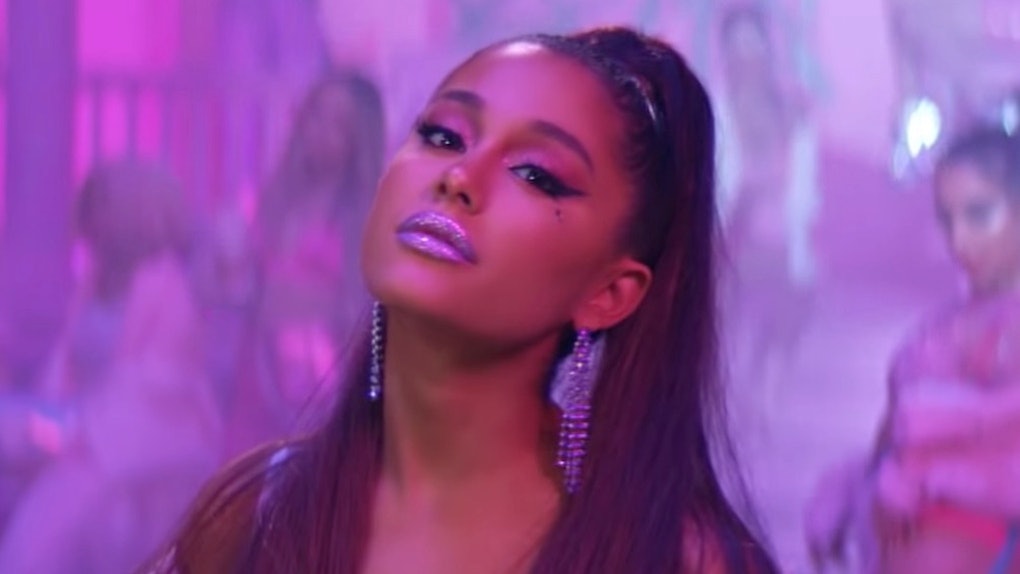 If Ariana Grande’s New Year’s resolution was to pull a Miley Cyrus and come into 2019 like a wrecking ball, bulldozing her way to the top of the billboard charts, she can check that one off her list. The “Sweetener” artist dropped her latest single “7 Rings” on Jan. 17, and fans cannot get this song out of their heads. Arianators aren’t the only ones who’ve noticed Grande’s song is catchy AF, though. Now, you can dancercise to The Fitness Marshall’s “7 Rings” dance workout that’s just as poppin’ as Ari’s lip gloss.

Personally, once Grande’s "Dangerous Woman" album dropped back in May of 2016, songs like “Into You” and “Every Day” became staple tracks on my workout playlist. Cut to 2018, when the “Sweetener” artist put "Breathin'"out into the universe, and she got me all up in my feelings. Now, in 2019, “7 Rings” has all but solidified itself as the independent woman’s anthem of the year, and it’s not even February yet. Clearly, Ari’s on a mission to make moves this year, and YouTube’s own fitness pop star, Caleb Marshall, otherwise known as The Fitness Marshall, is taking notice.

At the time of publication, it hasn't even been a full week since Grande released "7 Rings," and The Fitness Marshall has already uploaded a dance workout set to the hit single — which, BTW, already has 62 million views on YouTube. "Ariana's new song has us feeling like we're in the royal family," The Fitness Marshall told POPSUGAR. "Take the next three minutes and dance like your toilet is made of gold."

Trust me, coming from someone who has zero rhythm in her bones, you don’t have to be a professional dancer to get down with Marshall’s “7 Rings” choreography. Think of it this way: If Grande can get away with doing the bare minimum of bopping and booty-shaking in her music video, you can body-roll, my friend. Plus, if you take a look at Marshall’s caption for his “7 Rings” dance workout routine, he specifically states that his moves are meant to be a fun, easy way to work three minutes of cardio into your day. And let’s be honest here: The song is on repeat on your Spotify anyway, so you might as well get up and move your body to the beat, right?

Marshall begins the video walking out of what looks to be a large corporate building behind a giant dog statue made of diamonds in the middle of Lake Nona Town Center in Orlando, Florida. Obviously the setting isn’t as flashy as Grande’s ballin’ mansion in the actual music video, but as soon as the music starts and Marshall’s encouraging you to “dance like you have a million, billion dollars,” it’s like you embody the rich and flossy lifestyle of a 25-year-old musical artist. Plus, Marshall's moves are pretty easy to pick up on, comprised of exaggerated arm movements, full body rolls, and a whole lot of leg movement.

The Fitness Marshall and his Booty Army really do make fitness fun, but I think there’s an even deeper message that can be drawn from his idea to choreograph a dance workout to Grande’s new track. "7 Rings" might be hottest song on the charts ATM, but there’s also a message behind the performer’s catchy lyrics: That "if you want it, you can have it" mentality is super appealing and, honestly, pretty inspiring, and from what I understand, Marshall’s mission is similar. The YouTube fitness guru aims to show everyone — fitness/dance novices and pros alike — that they can meet their fitness and health goals if they really want it, and they can do so through dance.

Breaking down the moves, the choreography is simple enough for anyone of any fitness skillset to catch on to, but just because the workout is lighthearted and fun once or twice around, doesn't mean performing the sequence three or four times over won't prove to be an awesome cardio workout. From wood choppers to double rolls, not to mention hopping this way and that way, The Fitness Marshall's "7 Rings" dance workout will have you feeling like you’re at a club while simultaneously working up a sweat. Personally, I think Grande could learn a thing or two from Marshall. She's "got the juice," but he's got the moves.

More like this
I Tried Singing While Running Like Miley Cyrus & OMG, My Lungs
By Rachel Varina
25 Instagram Captions For Workout Pics & Being A #Boss In The Studio
By Marisa Casciano
TikTok’s Taylor Swift Era Trend Documents Your Throwback Swiftie Evolution
By Rachel Chapman
Stay up to date