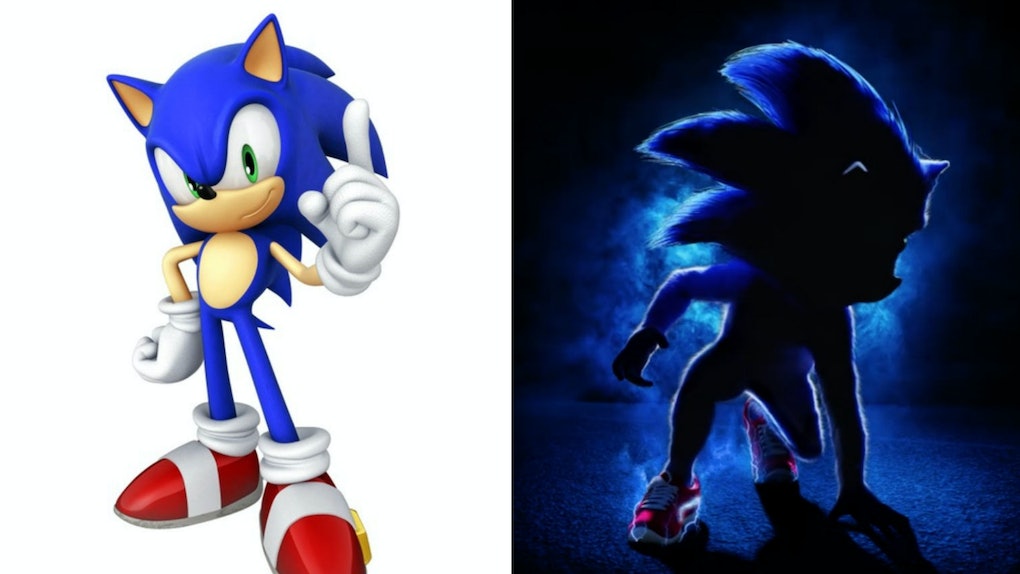 Since the live-action Sonic the Hedgehog movie was first announced at the beginning of this year, video game fans have been anxiously waiting to see how the upcoming film will create a realistic version of everyone's favorite speedy blue hedgehog. And the time has finally come to get our first glimpse at how Sonic will look in the upcoming live-action movie. IGN just released the first clip from the Sonic the Hedgehog movie, and it teases a whole new look for Sonic.

Because we all know Sonic just can't stay still, the newly released poster for the Sonic the Hedgehog movie is actually a "motion poster." Basically, this "motion poster" is a seconds-long snippet that gives you a quick idea of what Sonic looks like in action. Although Sonic is mostly obscured by shadow at the end of the clip, fans still get a good idea of how he will look in the movie, and how his speed powers may translate to the big screen as well. The motion poster begins with two blue streaks of light dashing across the screen, as we see Sonic speed through three golden rings. Finally, we get a close-up shot of the hedgehog, whose body is covered in blue electricity after his run.

Most notably, fans will notice that the movie version of Sonic is covered in visible fur, and that he seems a bit more muscular than his straight-limbed video-game counterpart. Not to mention his signature oversized shoes have been translated to a much more realistic pair of sneakers. Check out the new motion poster below:

Although we have only seen a silhouette so far, the Sonic design seems similar to another CGI-filled, live-action video game adaptation that is set to come out next year: Detective Pikachu. The recently released Detective Pikachu trailer surprised Pokémon fans with its fur-covered, hyper-realistic Pokemon, and Sonic's CGI fur definitely brings Pikachu's to mind.

The movie's executive producer Tim Miller told IGN that getting Sonic's fur right was the creative team's first step in translating the video-game character to the real world:

It would be weird and it would feel like he was running around nude if he was some sort of otter-like thing. It was always, for us, fur, and we never considered anything different. It’s part of what integrates him into the real world and makes him a real creature.

Sonic the Hedgehog will transport Sonic into the real world, where he will befriend Green Hills police sheriff Tom Wachowski, played by James Marsden. Sonic himself will be a CGI creation voiced by Ben Schwartz, and he will be up against his perennial nemesis Dr. Robotnik, played by Jim Carrey. A first-look set photo from the movie confirms that its setting of Green Hills (a nod to the iconic initial video-game level Green Hill Zone) will be entirely live-action.

Unfortunately, fans are still in for a long wait before Sonic the Hedgehog speeds into movie theaters. The upcoming movie is slated to premiere on Nov. 8, 2019.