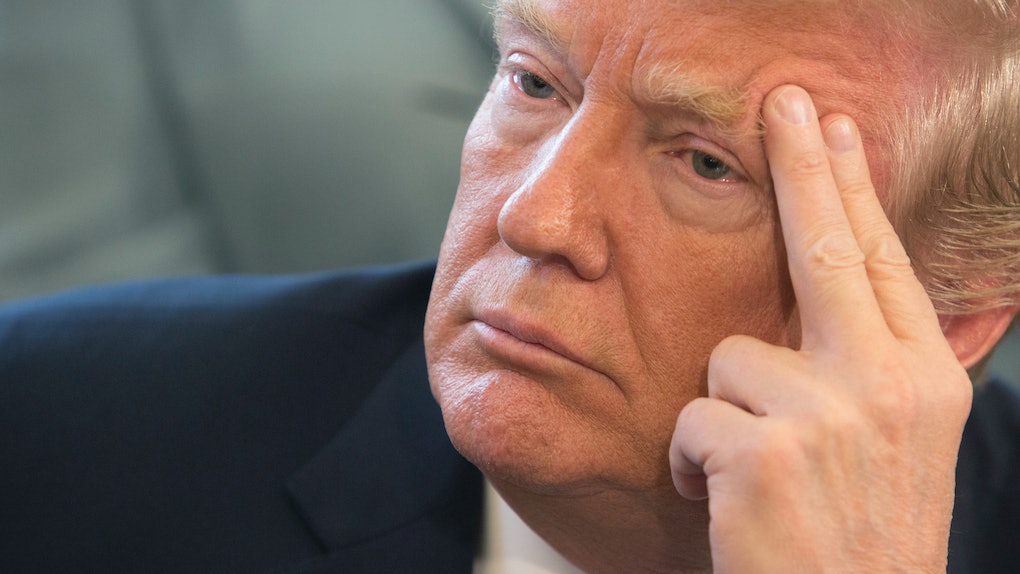 The FBI Took Info On The 'Access Hollywood' Tape In Raid On Michael Cohen, Report Says

Look who's back, back again. We all know about Donald Trump's Access Hollywood tape, which showed the president bragging about groping women without their consent. Well, the FBI took records on the Access Hollywood tape during the raid on Michael Cohen. I'm ready for the tea.

On April 11, The New York Times reported that FBI agents were searching for records related to the Access Hollywood tape during the April 9 raid on Trump's personal lawyer, Michael Cohen's, office and hotel room. The search warrant reportedly allowed agents to look for evidence as to whether Cohen attempted to hide incriminating details about Trump during the 2016 presidential election.

For those who, like me, have tried to forget about the infamous Access Hollywood tape, here's an unfortunate reminder. In October 2016 a tape was leaked of Donald Trump on set of NBC's Access Hollywood show. In the tape, Trump is heard bragging to host Billy Bush about groping and kissing women without their consent. Naturally, the video received huge backlash among the public. Trump released an apology, but later after the video surfaced Trump tried to convince everyone that it actually wasn't his voice on the tape.

This drama might have all gone down in 2016, but it looks like history is starting to repeat itself.

In addition to the tape, the Times reported that the FBI agents were also searching for documentation of payments Cohen allegedly made to two women who claimed they had affairs with Donald Trump. One of them is Stormy Daniels, otherwise known as Stephanie Clifford, the pornographic actress who's been making headlines since January when reports surfaced that Cohen had paid Clifford $130,000 for her silence about an alleged affair with Trump in 2006. Even though Trump has continuously denied the affair, Cohen's admitted payment to Clifford led many to wonder what else the lawyer might have been hiding about his client.

Cohen's lawyer, Stephen Ryan, referred to the raid as "completely inappropriate and unnecessary."

The past few months definitely haven't been the best for Cohen or Trump, and it looks like it isn't getting any easier. According to the Times, details from the agents' search warrant reveal that Cohen has become a person of interest during Trump's election campaign. This might mean that he's also under the eye of special counsel Robert Mueller, whose been conducting an investigation involving Russia's involvement during the 2016 presidential election.

This political soap opera is only getting juicier.

Personally, I still haven't recovered from the horrendous Access Hollywood tape, and I hope some justice comes from it even if it's years later. I'm not the only one who was shaken by the video. People ranging from politicians to women's rights groups expressed their outrage at the video, and some even went so far as to stream the tape on loop outside the White House.

UltraViolet, an online community dedicated to exposing sexism, was behind this "Rally To Grab Back" demonstration that took place Oct. 6 2017. UltraViolet's co-founder Shannon Thomas released a public statement that discussed how the Access Hollywood tape directly motivated this demonstration.

The Access Hollywood video was a disgusting display of Trump’s true colors. It was not so-called ‘locker room talk,’ it was a man bragging about sexually assaulting women. [...] The Donald Trump on that tape is the same Donald Trump that sits in the Oval Office every day, aggressively pursuing an anti-woman agenda, including the active dismantling of legal protections for survivors of sexual assault. That is why we are showing the video on loop in DC, and that is why it is all the more important that we stand up and ‘grab back.'

No matter if it was one, or five, years ago, it's never too late to stand up for what's right. In the meantime, I'll be looking forward to seeing what 2018 will bring for that tape.