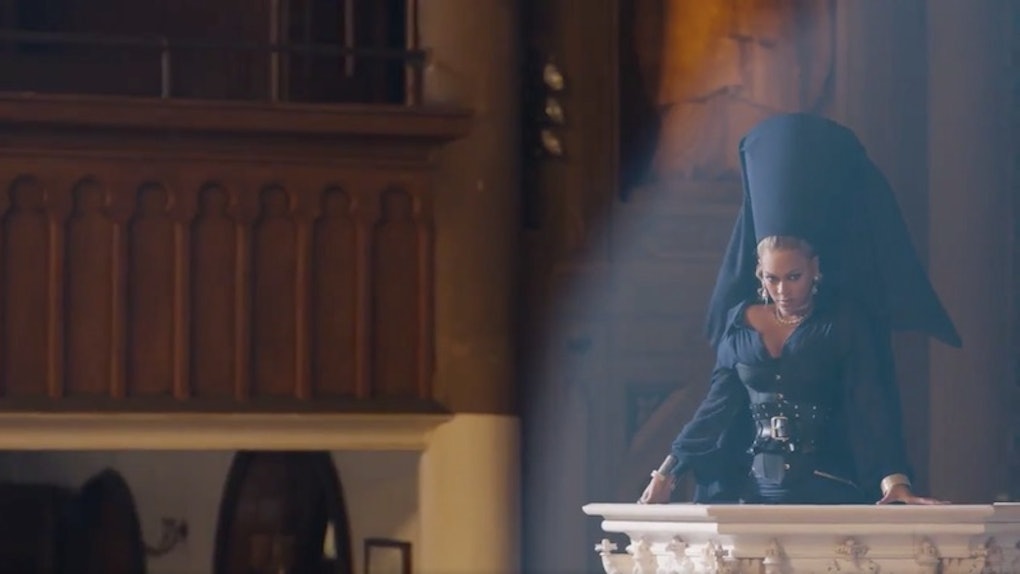 The Ending Of JAY-Z's "Family Feud" Video Is So Surprising

After months of anticipation, the video for JAY-Z's song "Family Feud" off his 2017 album 4:44 is finally here. It's an intense, eight-minute drama featuring a dozen big-name celebrities, including JAY-Z and Beyoncé themselves — but the ending of JAY-Z's "Family Feud" video comes as a jolting surprise. The entire video is an epic, narrative drama, including time-hopping and lengthy discussions on gender and race relations, which is all pretty fitting given the deep breadth of JAY's lyrics on this emotional track.

The music video made its official premiere on Friday, Dec. 29, exclusively on TIDAL (obviously — it is JAY-Z's business, man). The video begins with a scene in the life of an angry, unhappy couple in what is listed as the year 2444. That scene, which features Michael B. Jordan and Thandie Newton, goes on for two minutes, and ends with Newton's character declaring that "it's my throne."

From there, the video jumps around to a variety of different years, showing people's relationships with each other in short stints of time. We see scenes from 2148, 2096, and 2050. The 2050 sequence shows a group of women — the Founding Mothers — creating the "confessional papers," which are indicated to be a new version of a constitution for the United States. "America is a family, and the whole family must be free," one of the Founding Mothers says, and we're meant to intuit that this woman is the grown version of Blue Ivy, JAY-Z and Beyoncé's daughter. From that moment, we go into a sort of flashback from Blue of 2018.

In the "flashback" to 2018, we see glammed up Blue, JAY, and Beyoncé enter a church, all dressed up. That's when the music video proper begins, i.e. when the actual song "Family Feud" begins playing. That's over five minutes into the full video. From that point on — when the actual song starts playing — the "Family Feud" video really becomes a much more traditional music video, especially in comparison to the previous, more avant-garde, futuristic scenes.

JAY walks into a confessional booth, while Blue sits in a pew by herself in the mostly empty church. The video shows JAY as seen through the partially transparent partition (through which the confessor speaks to the priest).

And, well, that's basically the rest of the "Family Feud" video. JAY raps his lyrics sitting in the confessional booth, and eventually we see that it's Beyoncé on the other side, so it's like he's confessing to her, and asking her for forgiveness (rather than the religious rite of confession to a priest to seek God's forgiveness; yes, that makes Beyoncé God, I'm Catholic, don't @ me). Meanwhile, Bey is just there hanging out on the other side of the confessional looking absolutely fabulous, as she does.

Aside from the shots in the confessional, there are little shots of JAY standing in a suit near the altar, looking anxious, while Beyoncé stands, in domination, in the pulpit (the raised podium from which the priest delivers a sermon — get your church architecture game on).

And then... that's it, the video stops, cutting to credits (starting with the director credit for Ava DuVernay). It's actually a really strange part for the video to cut — it's right in the middle of the second (and last) verse in the song. "Kay losin' the babies 'cause their future's uncertain / Nobody wins when the family feuds / We all screwed 'cause we never had the tools," JAY-Z raps, and then the video ends. There are a full 10 lines left in that verse that just go unsaid in the video. This ending points to the obvious fact that the song itself is secondary to what's being presented in the video, which is a discussion on progress and familial cycles. It's more about the concept than about JAY's song — I mean, it's five minutes of scenes and only three minutes of the actual song. It's an interesting move for JAY-Z to agree to, and it definitely makes for a shock of an ending.

More like this
We Finally Know Who 'Becky With The Good Hair' Is In Beyoncé's Song
By Anna Menta and Brandy Robidoux
These Tweets About BTS' 'Bang Bang Con 2021' Sum Up The Epic Performance
By Cianna Garrison
With 'Like Water,' Wendy Found Her Biggest Cheerleaders In Her Red Velvet Bandmates
By Michele Mendez
Stay up to date