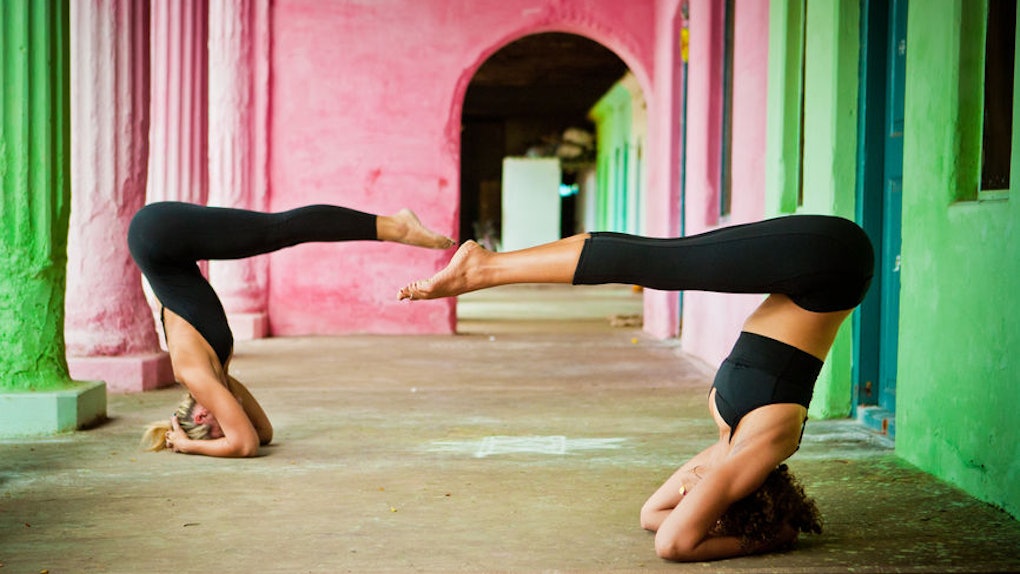 The Difference Between Mindfulness & Meditation Isn't Huge, But Here's What You Need To Know

At this point, you’ve probably heard that following a regular meditation practice is good for your mental health. You’ve also probably heard that embracing mindfulness is, again, good for you. But it's a little harder to pin down the difference between mindfulness and meditation, or to know which one you should pour your precious free time into, because hey, 10 minutes a day can be hard to come by when you have a billion other responsibilities on your to-do list. Luckily, there's no need to choose between the two, because according to an expert, they're actually closely related.

In an interview with Elite Daily, Pax Tandon, a mindfulness expert and author of the book Mindfulness Matters: A Guide to Mastering Your Life, shares her insight on some of the key differences between mindfulness and meditation, as well as some tips for how you can stick to a consistent routine that works for your lifestyle.

Basically, according to Tandon, meditation is a larger category that includes mindfulness. "They are similar in that they are both forms of contemplation, awareness, or reflection," she tells Elite Daily. "One, meditation, is a general term. The other, mindfulness, is more specifically related to awareness of the present moment." But meditation, as a large category, she says, can also include mantra meditation (wherein you repeat a word or phrase that helps you feel centered), Vipassana meditation (several days of silent reflection), and other versions of the practice. Mindfulness, on the other hand, is always immediate.

Now, if you've ever sat down and tried to meditate, you've probably realized that it's almost impossible a lot of the time to sit still for even five minutes without mentally planning your grocery trip or speculating about the new episode of Westworld.

But if you're having trouble sticking with meditation, Tandon says you may be taking it too seriously.

According to the mindfulness expert, some of the pressures that many people place on "successfully meditating" may be holding them back. But instead of getting frustrated when you aren't seeing immediate results, or assuming you aren't the kind of person who should meditate, remember that meditation really is for anyone. “These practices aren't a luxury just for those who live chill, hippie lives and meditate all day," Tandon tells Elite Daily. "The busier you are, the more you need mindfulness and other forms of meditation.”

If you're a beginner, Tandon recommends starting with a meditation app. As a complete novice myself, I found that the app Headspace was great for guiding me through the basics of meditation gently and effectively. Also, I could listen to that narrator's dreamy voice forever.

If you've already dabbled in meditation before, though, and you're looking to strengthen your routine, the mindfulness expert suggests finding a meditation coach at a nearby university or in your local area. While an introductory source like an app or a YouTube video is a great way to get started, exclusively solo practice won't make your meditation habit grow deeper the way joining a mindfulness group will, Tandon says. "There is no substitute for practicing with other human beings," she tells Elite Daily.

While meditation may be a practice you add to your routine first thing in the morning or at night before you go to sleep, you can easily find moments of mindfulness throughout the day.

Pay attention to the sounds and smells around you as you walk to work in the morning, and really savor that perfectly sweet watermelon slice you just grabbed. At its essence, Tandon explains, "mindfulness is a non-judgmental awareness of the present moment," so when you think about it that way, you can always find time for the practice.

According to Tandon, there isn't really a wrong or right way to practice mindfulness or meditation; the most important thing, she says, is to not see it as just another step on your to-do list that you only do in an attempt to make the rest of your day more productive. "These practices are meant to be a way of life," she tells Elite Daily. Treat them as such, and pretty soon, you'll wonder why you hadn't started practicing sooner.