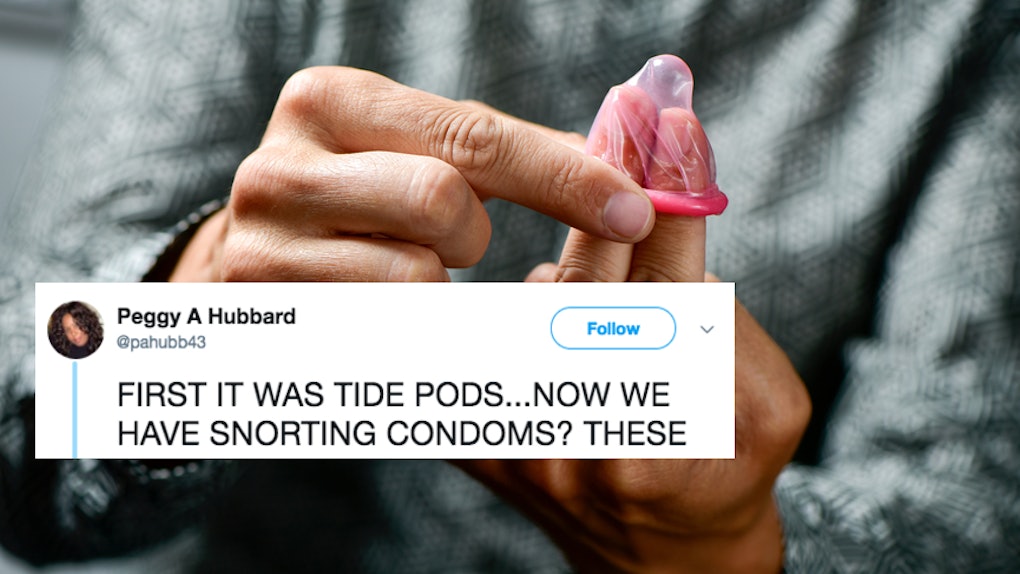 The Condom Snorting Challenge Is Going Viral, But It's Actually Really Dangerous

When I was a teenager, my friends and I would cause trouble by chasing Smirnoff Original with Smirnoff Ice (yeah, we were big Smirnoff people) at house parties and coming home inappropriately drunk. Yes, it made us feel cool and wild, but looking back, I don't think we were unique in choosing alcohol as our form rebellion. "Wild" kids across the U.S. have been drinking and smoking pot for decades. But now, teens have a new pastime that's gaining traction, and what they've come up with is even more risky: a condom snorting challenge.

Yes, despite what your heart may desperately want to believe, you really did read that correctly. People have literally started taking part in a "condom snorting challenge." When I first read the title, I hoped that maybe it was one of those things that sounds nothing like what it actually is. Kind of like ghosting has nothing to do with actual ghosts. But unfortunately, condom snorting is pretty much exactly what the name describes it as. USA Today explains that teenagers across the country are putting unwrapped condoms up one nostril and snorting it upward until it comes out of their mouth. Oh, and to make matters worse, they're filming the entire thing and posting the completed video on social media.

I would hope that most of us can look at this challenge and immediately assume that it probably comes with some serious health risks. In a recent article for Forbes, Bruce Y. Lee, a Forbes contributor and associate professor of International Health at the Johns Hopkins Bloomberg School of Public Health, outlined exactly why the condom snorting challenge poses such a threat to the heath of the people who partake in it.

For starters, he notes that just the act of snorting anything other than a spray prescribed by a doctor up your nose "can damage the sensitive inner lining of your nose, cause an allergic reaction, or result in an infection." Furthermore, he explains that the act could prove to be life-threatening in that the condom could potentially get stuck somewhere between snorting it up your nose and having it come back out of your mouth and cause the teen to choke.

"Even if you manage to successfully pull the condom out through your mouth, inhaling a condom up your nose would be very uncomfortable and potentially quite painful," he writes. "Would it really be worth all that just to get more likes and views?"

Obviously, Lee isn't the first person to question why in the world people would put themselves through something like this. People have also taken to Twitter to share their concerns.

We can stop waiting. The apocalypse is finally here.

Wait, so kids DO know what else you can do with condoms... right?!

This is a pretty valid reason to want out of planet Earth.

Just when we thought things couldn't get any worse...

For those of you who aren't fully understanding those Tide Pod references, let me give you a little refresher. Believe it or not, this isn't the first dangerous "challenge" young people have ever taken part in.

Back in 2012, USA Today reports that over 50,000 young people posted videos on YouTube of themselves taking part in what was referred to as the "cinnamon challenge." What is the cinnamon challenge, you ask? Oh, it's where you try to swallow a spoon full of dry cinnamon, only to gag and cough up orange dust on camera.

More recently, there was "the Tide Pod Challenge" that — you guessed it — had teens either just biting or actually eating Tide Pods. You know, like the ones you use in your laundry. Since January alone, USA Today reports that this particular challenge ended in 142 incidents reported to poison centers across the country.

Despite all of the press surrounding these negative trends that have become so popular amongst teens, it's important for us not to discredit teens in general. There are still a lot of teens out there who, instead of spending their time eating Tide Pods and snorting condoms, are actually out there fighting for the safety of our nation and standing up for the political issues affecting them. Don't let these challenges negate the work of the countless young people who have been fighting so passionately for what they believe in.

More like this
TikTok's Viral Eye-To-Eye Challenge Is A Wholesome Game To Play With Your BFFs
By Marisa Casciano
Making Love Vs. Having Sex: Here's How To Tell The Difference
By Anjali Sareen Nowakowski
25 Dirty Jokes To Text Your Partner For Filthy Laughs
By Corinne Sullivan
Stay up to date