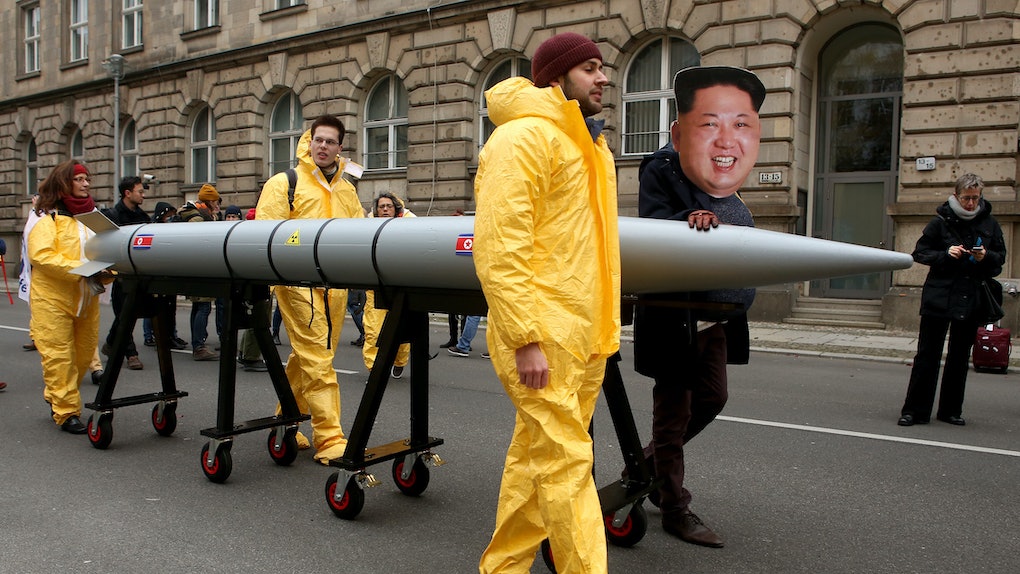 The CDC’s Nuclear Bomb Preparedness Briefing Is Really Not Reassuring

The Centers for Disease Control (CDC) is preparing employees for their monthly briefing, and this month's topic isn't necessarily the lightest of subjects. While President Donald Trump continues his Twitter war with North Korean leader Kim Jong-un, the possibility of nuclear war between the two countries has a lot of people worried. So it's maybe appropriate that the CDC is holding a nuclear bomb preparedness briefing. Cool, that's not worrisome at all.

The briefing, known as the "Grand Rounds" sessions, is expected to take place on Jan. 16 at the CDC's headquarters in Atlanta, Georgia, according to The Hill, and will focus on how to plan and prepare for a nuclear attack. Presenters will include radiation specialists, and the panels listed in the CDC's notice on the briefing include titles such as “Preparing for the Unthinkable” and “Roadmap to Radiation Preparedness.” Welcome to 2018.

It's unclear when the briefing and its topic were decided on, but the CDC stated that the decision to introduce this monthly briefing series stems from the need to "further strengthen CDC's common scientific culture and foster discussion and debate on major public health issues." OK, then.

Whatever the reason, the timing couldn't be better, thanks to the president's penchant for needling North Korea. On Jan. 2, Trump tweeted out,

North Korean Leader Kim Jong Un just stated that the 'Nuclear Button is on his desk at all times.' Will someone from his depleted and food starved regime please inform him that I too have a Nuclear Button, but it is a much bigger & more powerful one than his, and my Button works!

To ease some stress, the CDC did release a notice relaying that the chance of a nuclear detonation is still unlikely, despite Trump's Twitter fingers.

"While a nuclear detonation is unlikely, it would have devastating results and there would be limited time to take critical protection steps," the CDC said in their statement. "Despite the fear surrounding such an event, planning and preparation can lessen deaths and illness." However, the notice did ironically come at the same time as Trump's infamous "nuclear button" tweet, so, uh, take it all with a grain of salt.

Because this is horrifically only one of the number of tweets and comments Trump has taunted Kim with, including calling him "rocket man" in a speech to the United Nations General Assembly and threatening to "totally destroy" the small country. The taunts have resulted in huge criticism from Democrats and experts in foreign policy who fear the dangerous game the POTUS is playing with arguably one of the most tumultuous leaders in the world.

And Kim is matching Trump's threats with his own. Trump's "button" tweet was in response to threats Kim made nuclear war in an address to his public on New Years Day. According to CNN, the North Korean leader said,

The US cannot wage a war against our country at all. The entire mainland of the U.S. is within the range of our nuclear weapons, and the nuclear button is always on the desk of my office. They should accurately be aware that this is not a threat but a reality.

Trump may be not taking this situation as seriously as the rest of the public, but that didn't stop social media from calling for an online cease-fire in order to stop poking the bear. Some even raised question as to whether the tweet violated Twitter's policy of banning threats of violence. (Twitter later said in a statement to Business Insider that Trump's most recent tweet on North Korea wasn't considered a "specific threat" to any party, and as such didn't violate the terms of service.)

And even if the CDC thinks that a nuclear detonation is "unlikely," others are still worried. Mike Mullen, former chairman of the Joint Chiefs of Staff of both George W. Bush and Barack Obama, openly expressed his concern of Trump's actions by discussing the danger the United States is currently facing regarding nuclear war in an interview with Martha Raddatz on ABC's The Week on Dec. 31, 2017.

"We're actually closer, in my view, to a nuclear war with North Korea and in that region than we have ever been," Mullen told Raddatz. Great.

Saddle up for the end of the world, kids, and at least we'll be prepared.