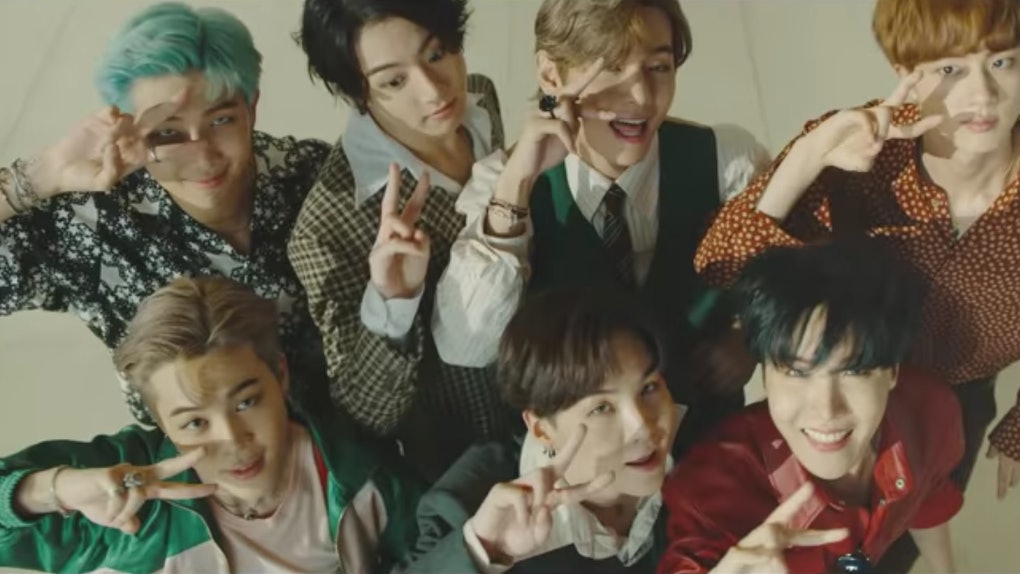 The Bloopers In BTS' "Dynamite" B-Side Video Are So Cute, They'll Make Your Heart Burst

BTS continues to take the internet by storm with their epic visuals. On Friday, Aug. 21, BTS dropped their first music video for "Dynamite" and over 3 million viewers tuned in live to be among the first to see it. The numbers that the visuals received led BTS to break not only the YouTube video premiere record, but, ultimately, the YouTube record for the most views in 24 hours, having racked up over 101 million views before the clock struck midnight (both records previously held by BLACKPINK for "How You Like That"). So, obviously, ARMYs were stoked for BTS' B-side "Dynamite" video that RM, Jin, Suga, J-Hope, Jimin, V, and Jungkook put out on Monday, Aug. 24.

On Aug. 24, fans waited eagerly for BTS to release their B-side video, and it did not disappoint. From cute bloopers to their shining personalities, the video had everything an ARMY could have ever hoped for in a music video.

BTS' B-side music video for "Dynamite" gave fans what felt like an inside look into the boys' friendships. While the original video was fun, watching RM, Jin, Suga, J-Hope, Jimin, V, and Jungkook dancing their hearts out, including cracking up over all their mistakes and bloopers, for nearly four-minutes has fans debating which version is their favorite,

"The bside is just filled with cuteness, fun, and laughter,,, bts ain't lying when they said that it's almost as good as the official mv #DynamiteBsideMV," one ARMY tweeted.

Another social media user raved: "The bside mv made me so happy bts just being all cute vibing and having fun around smiling and just the whole vibe of it its so cute i love them so much."

Check out the colorful visuals below.

From moves inspired by Michael Jackson to freestyle dance-offs between the boys, there was no shortage of entertainment during the B-side video. Not that fans would expect anything less.

Now that the B-side video is officially here, it'll definitely be on repeat to take away anyone's Monday blues.

More like this
10 Justin Bieber's "Lifetime" Lyrics For Romantic Captions & Pics With Your Darling
By Kelly Pau
Rosé From BLACKPINK's "Gone" Music Video Is The Ultimate Sad-Girl Aesthetic
By Abby Monteil
What Does Taylor Swift's Vault Door Video Mean? Fans Are Decoding It
By Cianna Garrison
Stay up to date