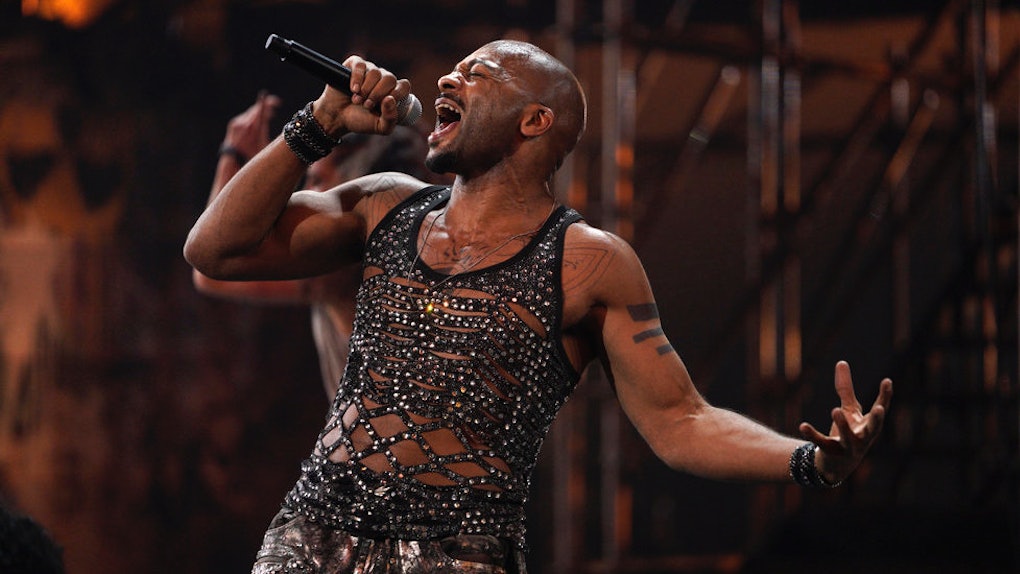 Sunday night was all about Jesus Christ Superstar Live, but the eagle-eyed Marvel fans also got a little shoutout during NBC's massive, live rock opera. You might have missed it if you blinked at the wrong moment or turned off your TV early, but at the end of the performance, there was a Black Panther easter egg in Jesus Christ Superstar Live that was just the perfect way to close out the night.

Although John Legend was playing Jesus Christ (and did an incredible job in the role), the night truly belonged to Brandon Victor Dixon, the Hamilton star who completely nailed the scene-stealing role of the betraying apostle Judas Iscariot in Jesus Christ Superstar Live in Concert. Anyone familiar with Andrew Lloyd Weber's '70s musical already knew that the real breakout star of Jesus Christ Superstar is Judas (he gets so many great songs!), and Dixon was clearly more than up to the task of delivering the insane vocals and frenetic dance moves that the part required.

After stealing the show by belting the finale number "Superstar" in a shimmering, chainmail tanktop, Brandon Victor Dixon continued to wow viewers during the final bows, when he quickly flashed the Wakanda Forever salute from Black Panther after taking his bow. You can see the moment for yourself below:

Brandon Victor Dixon's arm gesture was instantly recognizable to anyone who has seen Black Panther. In the recent superhero blockbuster, the gesture is used as a salute among the citizens of Wakanda to denote their loyalty to the country. Among Black Panther fans, the salute has gained a wider purpose as a message of solidarity and power.

Because of how insanely popular Black Panther is right now — it is the most tweeted-about movie ever, after all —Brandon Victor Dixon's Wakandan salute during the Jesus Christ Superstar Live in Concert final bows was obviously a major highlight of the whole show. Black Panther fans were quick to notice the Wakanda Forever salute and applaud Dixon for throwing the meaningful gesture into his bows.

As Broadway fans pointed out, this is not even the first time that Brandon Victor Dixon has created a show-stealing moment during his final bows of a live production. At the end of 2016, shortly after the presidential election, the newly elected Vice President Mike Pence attended a showing of Hamilton on Broadway, which starred Dixon as Aaron Burr at the time. Dixon made headlines when he addressed Pence directly from the stage, delivering a short speech that underlined the cast's fears about the incoming administration, but ending with hope that seeing Hamilton may have inspired him.

Clearly, Brandon Victor Dixon is not afraid to leave a live show with a very memorable exit. During Jesus Christ Superstar Live in Concert, a number of viewers were also struck by the similarities between Dixon's previous role of Aaron Burr in Hamilton and his current role as Judas Iscariot. Both parts are considered complicated antiheroes in their respective musicals, and end up doomed in one way or another for becoming consumed with envy over the magnanimous title character. It definitely felt like Dixon's time as Aaron Burr was great training to get into the character of Judas in Jesus Christ Superstar.

Check out some of the responses to this interesting Burr-Judas connection below:

After all of that incredible dancing, singing, and acting, it was just a really cool moment to see Brandon Victor Dixon bring the night all together in the final bows by throwing up that Wakanda Forever salute. It was also a great reminder that Black Panther is nearing the end of its theatrical run right now, so you've only got a few chances left to go see it!

More like this
These Tweets About Regé-Jean Page Leaving 'Bridgerton' Are Royal Bummers
By Cianna Garrison
These 'The Nevers' Theories About That Flying Ship Are Absolutely Bonkers
By Ani Bundel
Disney+'s 'High School Musical' Series Season 2: Release Date, Trailer, Cast, & More
By Ani Bundel
Stay up to date