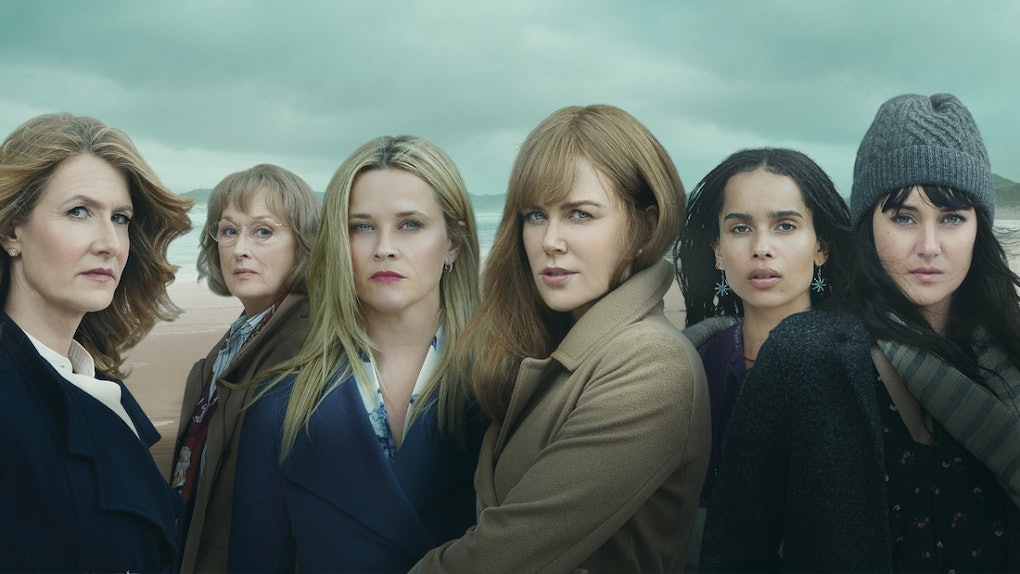 The 'Big Little Lies' Character You Are, According To Your Zodiac Sign

Big Little Lies is a serious mood. What seemed like your typical brooding HBO series, featuring the likes of Hollywood legends such as Nicole Kidman, Reese Witherspoon, and Laura Dern, turned out to be one of the most addictive shows in the history of television. (Well, in my opinion, at least.) Throughout Seasons 1 and 2, there were surprise twists and turns around every corner. And the Big Little Lies character you are, according to your zodiac sign might surprise you as well, given the innate intricacies of both the protagonists and the antagonists.

Based on Liane Moriarty's best-selling novel of the same name, the sinister yet oddly humorous HBO drama tells the tale of five upper-class mothers, — played by the aforementioned trio, as well as Shailene Woodley and Zoë Kravitz — whose illicit entanglements led to a controversial murder mystery in the small and prestigious town of Monterrey, California. How does the plot have anything to do with astrology? It actually doesn't, but I figured I'd give y'all a tiny synopsis on the series before taking a closer look at the individual character analyses, according to the zodiac.

Find out your Big Little Lies alter ego according to your zodiac sign below:

You're bold, impulsive, and highly passionate. You're always looking for confrontation — even at the worst moments — but it's all a matter of self-expression. However, your hot-headed actions aren't very strategic.

You're patient, kind, and sensually alluring. Completely set in your ways, you stand firm once you've made a decision, especially when it pertains to the things that bring you comfort. Don't let your stubborn nature put your well-being at stake.

You're a relentless thinker with a versatile mind. Intelligent and resourceful, you purposely surround yourself with those who bring you closer to your goals. What most people don't know is you also have a dark side to your personality.

You're a sensitive soul with a mysterious demeanor. Maternal and naturally intuitive, your emotional body speaks to you in ways you can't describe. You're a pro at keeping secrets, but your guilty conscience can also get the best of you.

You're bossy, cinematic, and emotionally flamboyant. Courageous and prideful, you can also be incredibly vicious if your ego is hurt. You're fearlessly protective of your loved ones and your royal reputation.

You're discreet, organized, and practical-minded. However, thanks to your introverted personality, you tend to repress your emotions and suffer in silence. Remember, there's no such thing as perfect.

You're charmingly diplomatic with a persuasive presence. Relationships are a big part of your life, which is why you tend to become dependent on others more often than you'd like.

You're highly intuitive, but you're also secretly vengeful. You'll stop at nothing to get revenge on the people who have wronged you. Nothing. And your smoldering sex appeal comes with the turf.

You're a thrill-seeking risk taker and a sneaky gambler at heart. You prefer living life to the absolute fullest instead of playing the practical-adult card. Your overindulgent personality eventually catches up to you.

You're pragmatic, ruthless, and always persevere. Despite the terrible things and shocking behavior happening all around the world, you somehow manage to keep your eyes set on the prize until justice is served.

You're an outspoken non-conformist with a big attitude. You'll do whatever it takes to give back, even if it's potentially detrimental to you. You're a true rebel at heart and you don't do well with authority.

You're gentle, enigmatic, and highly empathic. A keeper of taboo-like secrets and an excellent listener, you willingly put yourself in sticky situations in order to help those in need.