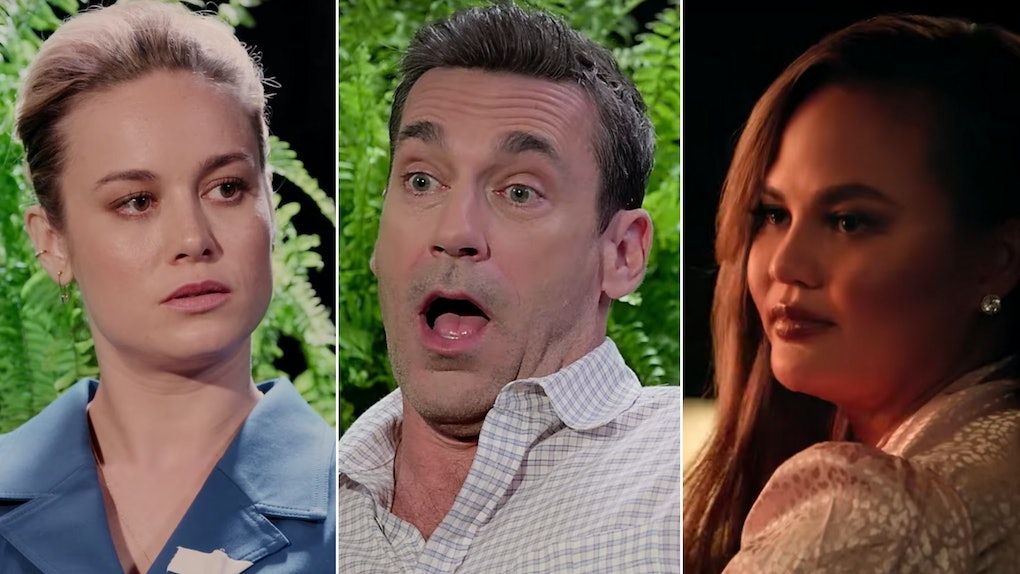 The 'Between Two Ferns: The Movie' Trailer Is Packed With Basically Every Celebrity

Zach Galifianakis' bizarre, hilarious talk show Between Two Ferns is setting out on its biggest undertaking yet — and that is saying something for a show that has featured guests like Barack Obama and Hillary Clinton in the past. The comedic web show, which has been dropping new episodes on random occasions since 2008, is getting the feature-film treatment in a Netflix movie dropping later this month. And you'd better get pumped, because the Between Two Ferns: The Movie trailer reveals that the movie is going to be packed with more A-list celebrities than, well, pretty much anything ever.

In case you're not familiar with Between Two Ferns, the concept is basically a talk show gone wrong. Zach Galifianakis serves as the host, who constantly flings shady comments and awkward questions at his celebrity guests. The series first premiered in 2008 as the flagship series for Will Ferrell and Adam McKay's Funny or Die website. It continued to garner tons of attention for landing major guests, including Justin Bieber, Jennifer Aniston, Brad Pitt, Jennifer Lawrence, and many more. The show's release schedule has become much more erratic in recent years, with only four episodes being released in the past five years: Episodes centered on Barack Obama and Brad Pitt both dropped in 2014, an episode featuring Hillary Clinton dropped in 2016, and an episode focused on Jerry Seinfeld and Cardi B came out in 2018.

Now, Between Two Ferns is back and bigger than ever. In the newly released trailer for Between Two Ferns: The Movie, Zach Galifianakis sets out with his crew to take his talk show on the road, interviewing a ton of major celebrities along the way. And I really mean a ton. The trailer features hilarious scenes with Matthew McConaughey, Chrissy Teigen, Jon Hamm, Brie Larson, Benedict Cumberbatch, and David Letterman. And the trailer also teases that scores of other A-listers will show up in the movie as well, including Keanu Reeves, Paul Rudd, Tiffany Haddish, Hailee Steinfeld, Peter Dinklage, Jason Schwartzman, Rashida Jones, John Legend, Adam Scott, Awkwafina, John Cho, Chance the Rapper, and Tessa Thompson.

Check out the new trailer for yourself below:

OK, seriously, my head is spinning from all that star power coming at me so fast. And the trailer basically guarantees that viewers will get to see all of these superstars in hilariously awkward situations, like Galifianakis calling Jon Hamm a "hot idiot" and asking Chrissy Teigen if John Legend calls his penis "his EGOT."

While fans are already familiar with the brand of oddball celebrity interviews that made Between Two Ferns so beloved, what remains less clear about the movie is the central plot that will connect these interviews. While the trailer teases out a plot of Galifianakis journeying across the country to film multiple episodes of his show to prove himself to his boss (Will Ferrell), it seems like this storyline may easily just be a device to deliver as many strange celebrity interviews as possible. Fans will have to wait to see how much this plot plays into the movie when Between Two Ferns: The Movie is released on Netflix on Sept. 20.