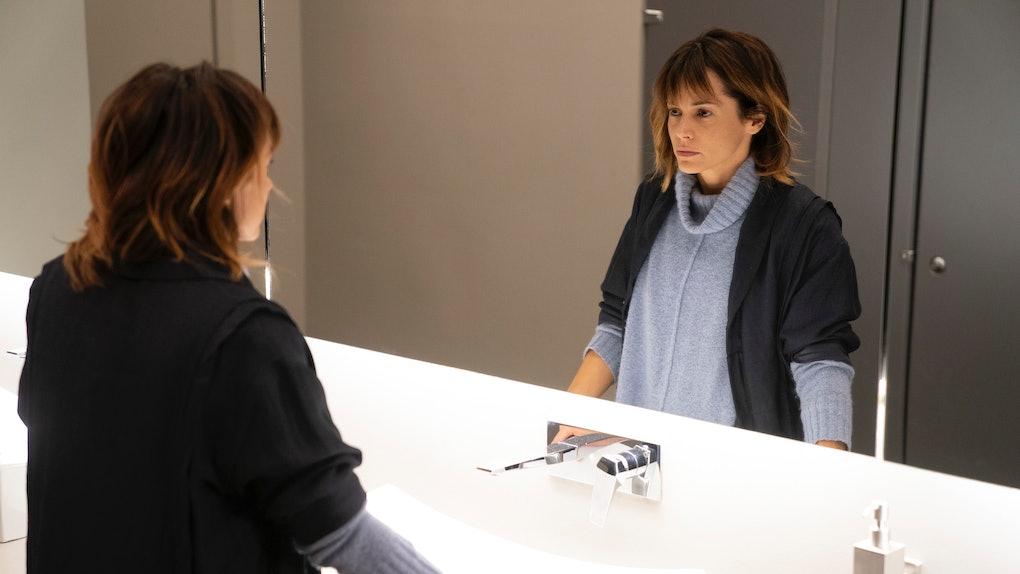 Welp, A Million Little Things just pulled an actual This Is Us by dropping an unpredictable twist on its audience. It turns out that who we thought was the elusive Barbara Morgan doesn't have as juicy of a connection to Jon as we believed, but she adds fuel to the mystery behind his death. The latest episode revealed that Ashley wasn't the only one in Jon's professional life to feel serious guilt about his suicide, but anyone invested in who that secret insurance beneficiary is just has to be patient. The A Million Little Things Episode 14 promo promises real insight into Barbara Morgan's identity, and it's about time.

Ever since her fleeting appearance at Jon's funeral in the Million Little Things pilot, fans have suspected that UnREAL star Constance Zimmer played the fourth beneficiary of Jon's Rutledge trust, which contained money seemingly meant for Jon's friends to help them look after his family. Zimmer then seemed to pop up more in promos than actual episodes, but she was first seen after the funeral refusing to speak with Jon's assistant Ashley (Christina Ochoa). In Jan. 31's episode, the long-teased meeting between Zimmer's character and Delilah (Stéphanie Szostak) finally happened, revealing Zimmer as Jeri, a city council member who worked with Jon (Ron Livingston) on his subway vote.

As seen the day before Jon's death, his vote failed, prompting his angry phone call with Jeri right before his deadly jump off the office balcony. Feeling guilty about how she may have contributed to Jon's death, Jeri approached Delilah to reveal that she and Ashley worked to bring the transit vote back to the council's attention. Jeri was confident that the new vote would result in their favor, allowing for a new subway stop near Jon's old apartment and adding value to his real estate property that could improve Delilah's debt. Delilah ultimately chose to sell the property before the vote even occurred, but the men still have the mystery of Jon's insurance policy to crack.

In the promo for Feb. 7's "Someday," Delilah receives flirty attention from a new man, while Regina (Christina Moses) begins to break down from the pressure of her restaurant opening. Meanwhile, Gary (James Roday) is on the hunt for Barbara Morgan, but the promo's reveal of a woman at the house he visits isn't as obvious as it seems. According to Deadline, actress Drea de Matteo plays Mrs. Nelson, a woman who lives at Barbara's old address. However, as she's set to become a recurring character, perhaps Mrs. Nelson has her own secrets about Barbara's identity. If Jack Pearson can keep quiet about a living brother for 20-plus years, it's not like we can trust that a brand new character actually is who she says she is.

Zimmer's cameos may have been a tease, but here's to taking one slow but steady step toward truly finding out who Barbara Morgan is. Season 1 of A Million Little Things continues on Thursday, Feb. 7, at 9 p.m. ET on ABC.