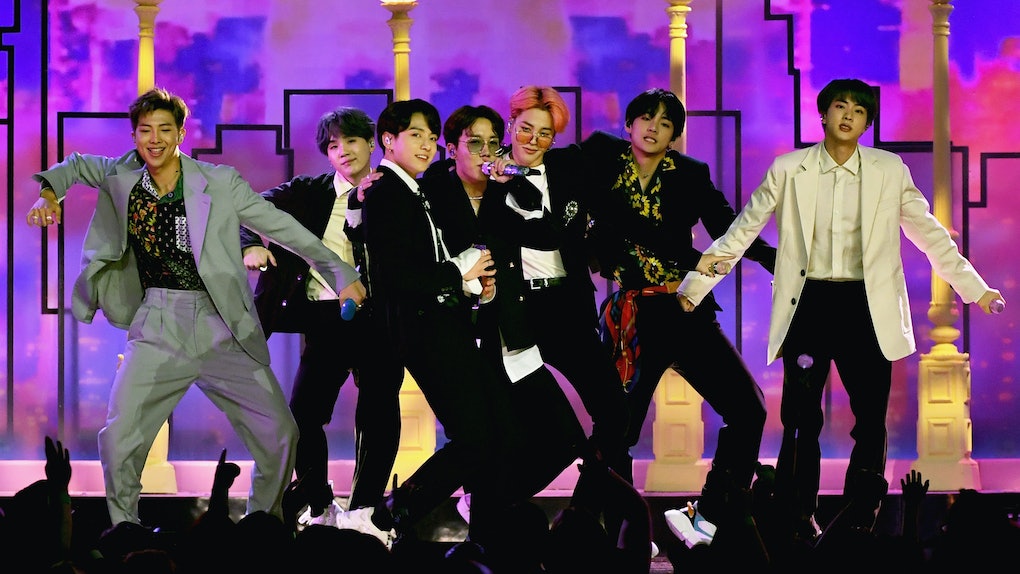 If you were among the many people around the world watching BTS' last day of Muster on Sunday, June 23, you know it was a bittersweet moment. It was sweet because it's always such a treat to watch BTS perform (duh), but it was a little sad because it means the fifth Muster is officially over. Here are the six best moments from BTS' last day of Muster, because there's no shame in spending your day reliving the highlights of a BTS performance.

If you're a BTS newbie and haven't heard of a Muster before, allow me to explain. A BTS Muster is an annual concert put on by the K-Pop group where some fans can meet RM, Jin, Suga, J-Hope, Jimin, V, and Jungkook and enjoy a special performance specifically curated for them. Musters include new music and old faves alike, so concert-goers have the chance to enjoy music and performances from BTS' entire discography. The name "Muster" is actually pretty clever — the word muster means "a formal gathering of troops," and since BTS fans call themselves the BTS ARMY, it technically is a formal gathering of the troops when they all meet up in one spot.

One of the sweetest moments during the last day of BTS' Muster took place when the boys went to take a seat and Jungkook started massaging V's shoulder. Jungkook stopped when they sat down, but it was clear V wasn't finished — he tapped Jungkook and positioned his back toward him, indicating he wanted more. Of course, being the loving bandmate that he is, Jungkook obliged and continued giving V what looked like a really excellent back rub.

During their performance of "Boy With Luv," there was a brief moment where Jimin walked over to Jungkook and gave his shoulder two light punches. As if that weren't cute enough, Jungkook then flashed Jimin an adorable smile, making everyone's heart absolutely melt.

When the Muster was over and the boys were walking out to go home, fans caught Jungkook waving goodbye with his phone flashlight so people could see where he was more clearly. It's so clear that Jungkook and the other BTS boys love their fans — no wonder ARMYs are so dedicated to K-Pop group.

4. Jimin Goofing Around In General

There were many moments throughout the night where Jimin was just being plain silly. He made goofy faces behind RM, playfully punched Jungkook, added a little humor to his choreography, and, at one point, completely fell on the floor. Leave it to Jimin to keep things interesting.

5. Jungkook Bowing To An Elder In The Audience

In my absolute favorite moment of the Muster, Jungkook noticed an elder in the audience and bowed to her, a common sign of respect in many Asian cultures. The fact that he could be mindful enough to do that in the middle of the performance speaks volumes about Jungkook as a person and also reflects so well on BTS as a whole. Plus, it was just overall adorable.

Near the end of the Muster, J-Hope had an adorable moment where he made a few silly faces to the camera before saying, according to translation in the video, "I am your hope. You are my hope, and my name is... J-Hope!" Recognizing where they were, he said, "This is the Olympic stadium," and then he danced around for a second and exclaimed, "This is rhythmic exercise!" It's honestly so heartwarming to see these hardworking boys also have fun on stage.

BTS also had some memorable group moments during their fifth Muster, like this video of them singing "Autumn Leaves" a cappella. TBH, there were so many memorable moments that will keep ARMYs going until the next Muster.