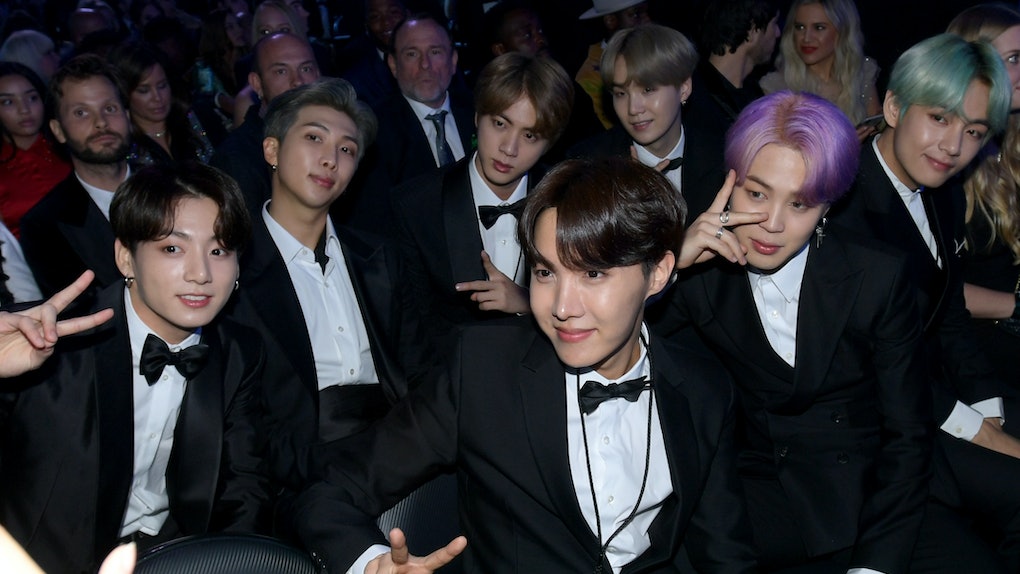 When Is BTS' 2019 Muster? This Year's Fan Celebration Will Be Bigger Than Ever

If you're new to the BTS ARMY, you may have seen some rumblings about BTS' upcoming 5th Muster event on Twitter, but not really known what, exactly, it is. Well, let me explain. If you crack open a dictionary (OK, pull up Google) and search for the word "muster," the textbook definition is "a formal gathering of troops." Basically, BTS' Muster is a clever name for the BTS' annual fan meeting where ARMYs gather to meet the boys and watch a special performance put together specifically for them. So, when is BTS' 2019 Muster? BTS just revealed that their 5th Muster event will go down over the span of two weekends in June, so read on, because I'll run down everything that's known so far.

But first, let's go over how the big wigs over at BigHit Entertainment started off building buzz for this awesome announcement. On March 28, the official BTS Instagram account (which is pretty much the only social media account BTS doesn't post to on the regs, so anything posted there is a big ol' thing) was updated not once, not twice, but three times with teasers. Among them was a video that showed an animation of a deserted stairway in South Korea that, after a few seconds, is enveloped in magical sparkles as a shop appears. ARMYs, not missing a beat, put two and two together and realized the theme of the 5th Muster would be "Magic Shop," the title of the fan-favorite song from the boys' Love Yourself era.

A short time later, BTS dropped the details everyone was waiting for. A poster written on distressed, parchment-like paper (that could literally be straight out of a Harry Potter movie, I might add) dished that BTS' 5th Muster would have a Part 1 and a Part 2.

Part 1 will go down on June 15 and 16 in Jimin and Jungkook's hometown of Busan, South Korea at the Busan Asiad Auxiliary Stadium.

Part 2 will take place on June 22 and 23 in Seoul at the Olympic Gymnastics Arena.

Check out the announcement poster below:

I am sending this invitation to you (the dearest) with my heart. I heard the news that I’m needed. Your call soon became Magic Shop’s key. The moment you feel like you need Magic Shop (maybe you needed consolation or sometimes when you feel like disappearing) you’ll see the door of Magic Shop. I’ve prepared to listen to your stories. Magic Shop will be comforting and heart-touching to you. I want to see the stars of your Milky Way. You’re welcome to come to your Magic Shop. — From the owner of Magic Shop

At the bottom of the invitation, a few old-school songs from BTS' catalog are scattered across the page like "Love Maze," "134340," "Jump," and "Ma City," but other songs seem to be peaking out from behind burns and smudges on the page.

Fans are convinced the songs will be the boys' setlist for the 5th Muster, so they've gotten to work trying to decode the concealed songs. Some of the songs they're convinced are hidden on the page are "2! 3!," "Pied Piper," "Whalien 52," "Intro: Skool Luv Affair," and "Dimple."

It's unclear how (or if) the 5th Muster will affect BTS' annual Festa event. Muster usually takes place in the early or late months of any given year, while Festa (the boys' annual celebration of their debut) takes place over two weeks in June leading up to June 13. But considering this is the first time Muster is taking place in June, it's unclear how Festa plays into all this.

More like this
This Theory About The Songs In BTS' "Butter" Concept Videos Will Blow ARMYs' Minds
By Michele Mendez
Who Will Play The Fantastic Four For Marvel? Twitter Has So Many Ideas
By Dylan Kickham
What Is Coco Jones From 'Let It Shine' Up To In 2021? She's Doing It All
By Sydney N. Sweeney
Stay up to date