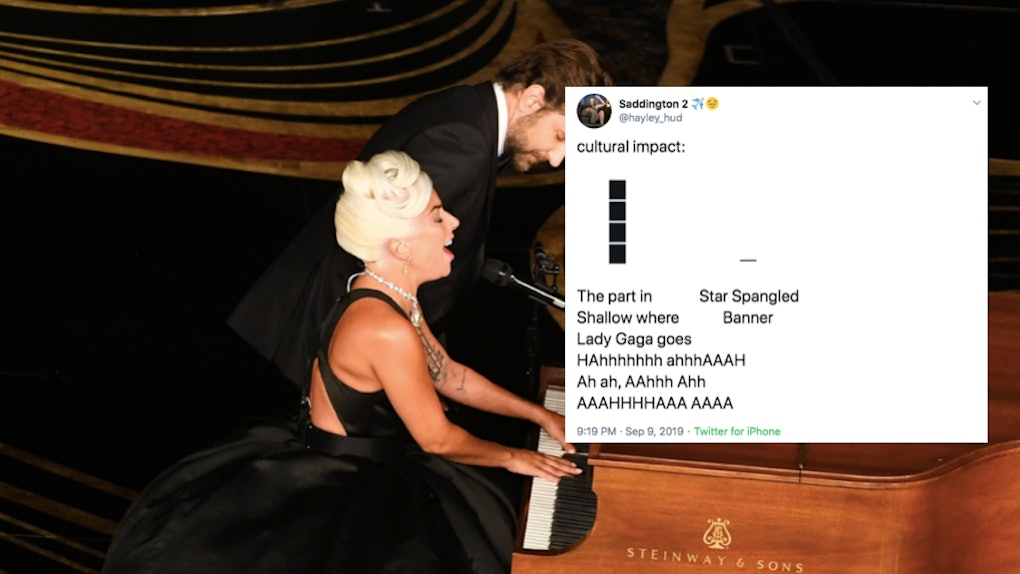 The 10 Best "Cultural Impact" Memes That'll Make You Rethink Everything

When it comes to memorable pop culture moments, some that first come to mind include that iconic Britney Spears and Madonna kiss at the 2003 VMAs, the release of the final Harry Potter book (and eventually, the final movie), and, of course, Beychella, which is up there with one of the best concerts I've ever seen that I didn't even attend. Well, recently people on Twitter have decided to weigh in on moments they think have had a lasting impact, and the 10 best "cultural impact" memes might make you rethink your stance on what you thought was a defining ~moment~.

If you're not yet familiar with the newest meme to trend in the Twitterverse, let me fill you in. First, we'll go way back to June 9, 2018, when, per Know Your Meme, the first cultural impact meme was shared by Twitter user @prasejeebus (aka Jon). He shared a tweet that read: "Cultural Impact:" and then it was followed with "Miranda Cosgrove, Elvis, The Beatles, U2." As for rating the acts' impact, Jon doled out four bars, three bars, one bar and no bars, respectively, essentially giving Cosgrove the advantage over the other three historically-lauded musicians. Now, I'm as big of a Drake & Josh and iCarly fan as the next person, but I can also chuckle at Cosgrove's singing career taking the top spot over a band like The Beatles. (Don't @ me, Cosgrove stans.)

So basically, the meme is about giving the cultural impact "gold medal" to a moment or person that you might not think would edge out a more famous moment, individual, or even an entire industry. The meme began noticeably trending in early September 2019, over a year after the initial post. Take a look at the best pop culture moments that might just be No. 1 in your heart after you get through them all.

1. The Fairy Godmother's performance in Shrek 2

No disrespect to John Stafford Smith and "The Star-Spangled Banner," but Jennifer Saunders' "I Need A Hero" from the 2004 sequel can get it.

Even though there's no direct music competition, the video of Brittany Broski's kombucha experience handily defeats the British rockers in this meme. TBH, I get it. Have you seen Broski's vid? It's a rollercoaster of emotions, and if that doesn't leave a lasting impact on you, I don't know what will.

3. The baseball scene in Twilight

Now, most people might remember the Twilight movie's release as the moment their favorite vampire love story hit the big screen, but for some, its introduction of vampire baseball is what really left an impact. The whiplash-inducing speed of the Cullen crew clearly stuck with audiences, even over a decade later. For real, though, how was that not a home run?

4. Kevin's famous chili in The Office

Anyone who enjoys a good meal surely remembers the opening to the "Casual Friday" episode during Season 5 of The Office. Kevin Malone cooked up a pot of his famous chili, aka "the thing he [does] best," and then he proceeded to drop the whole pot filled with his hand-pressed garlic and toasted ancho chilis. It was a very "Kevin" moment, but the memory of the chili lives on. So, take that, entire culinary industry.

In a face-off of celeb couples, Twitter is giving the edge to Stranger Things' Keery and his GF's recreation of the iconic Dirty Dancing lift over Shawn Mendes and Camila Cabello's hilariously NSFW kiss on IG.

Yeah, yeah, Mozart is one of the most famous classical composers of all time, but have you ever even seen Mamma Mia!? They even made a sequel because there are just too many good ABBA tunes to cram into one movie. Not to rub it in, Mozart, but, um... "The Winner Takes It All."

Case in point: When Zendaya recently sported the same suit as Michael B. Jordan, he said she wore it better, "hands down no contest." Who am I to argue with Mr. Jordan about that spot-on assessment?

Detective Jake Peralta, played by Andy Samberg, leads an unexpected rendition of "I Want It That Way" by five murder suspects that will hit you right in your Backstreet Boys-loving heart. You can feel OK about loving it over all other cold opens that have ever happened because these are, of course, actors on a sitcom and not actual felons.

Does A Goofy Movie seem like a deep cut to you? Maybe, but I'll always remember that final scene where Max Goof does his best Powerline (the heartthrob musician from the film) impression. Also, did Fight Club teach anyone how to warm up a can of soup with a car lighter? IDK, I've never seen it, so the edge stays with A Goofy Movie.

You really thought there'd be a cultural impact meme without Lady Gaga on it? No offense to her meat dress or killer Super Bowl performance in 2017, but that part in "Shallow" where she goes bonkers with her vocals will stay with me for the rest of my life.

So, there you have it. Twitter has spoken about what reigns supreme in pop culture, and honestly, I'm kinda here for all of it.