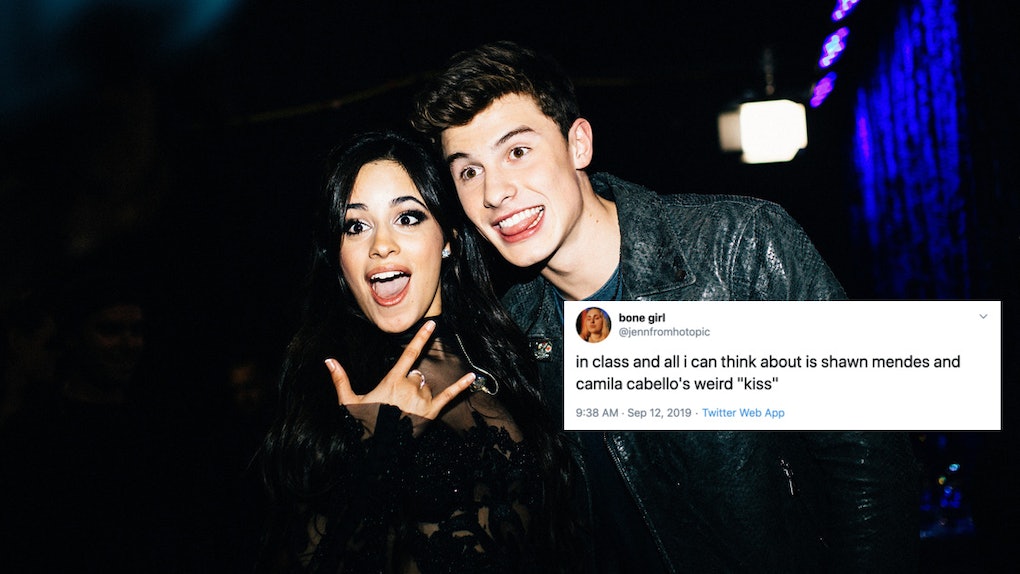 If you still haven't quite processed what you saw after watching a certain pop star's Instagram video that may or may not have rocked fans to their core on Sept. 11, 2019, the tweets about Shawn Mendes and Camila Cabello's kiss on Instagram may help you really sort through your feelings. For those of you who don't know what I'm referring to, Mendes posted an absolutely bonkers video of himself and Cabello going to town on each other's faces in a kiss.

“So, we saw — like on Twitter and stuff — you guys saying stuff about the way we’re kissing and how it looks weird, like we kiss like fish," Mendes began in the video. At that point, Cabello chimed in to say, “Yeah, really hurt our feelings.” Then, Mendes concludes the dialogue portion of the video to let us know they're about to show us how they "really kiss."

Finally, something absolutely outlandish happens. They lean in for what innocent fans may have thought was just going to be a kiss, but instead start — and there’s truly no better way to describe this — all but eating each other’s faces. No, seriously. You can watch it for yourself here:

Obvi, based on the fact that the video literally concludes with Cabello LOL-ing so hard that Mendes has to stop recording, we know it was just a joke. But fans are still shook. And they had to turn to Twitter to get their feelings out.

This fan is convinced it was their first kiss.

I beg to disagree. I mean, has this person even seen their 2019 VMA performance?

This person just really would rather never see the video again.

OK, fair. To each their own.

This fan was shocked.

This fan is convinced this whole thing is the result of neither Cabello nor Mendes ever having gone through an awkward phase.

I mean, I know better than anyone that an awkward phase can do wonders for a person's character. That being said, IDK if it necessarily made me a good kisser. BRB, asking my boyfriend.

This person thinks the video is reason enough for Mendes stans to get over him.

I disagree. I think the video is all the more reason to love him. I mean, it's hilarious.

This fan wants them to star in a comedy.

I have never been more here for anything ever.

This fan got a good chuckle out of it.

If this isn't an "LMAO" moment, IDK what is.

This fan compared them to one of the great comedy classics.

Step Brothers always wins in my book. But I think Mendes and Cabello are a close second.

This person was into it.

This person really just wants to forget this video ever existed.

In all fairness, the video was a lot to take in.

The video made an already weird day even weirder for this girl.

Maybe it cheered her up a bit?

Obvi, someone had to compare it to that pic of Timothée Chalamet and Lily Rose Depp.

ICYMI: This is the pic being referred to here.

This fan crowned it the "most iconic kiss of the damn century."

And I don't disagree. Sorry, Madonna and Britney.

This fan made a fantastic Pokémon reference.

If you know, you know.

This fan literally just cannot stop thinking about it.

SMH, who would have thought one silly Instagram kiss could interfere with a young woman's education?

Well, we can feel however we want to feel about the couple and their kiss but the fact of the matter remains that these two are in love and, luckily for us, they're not afraid to share their love with the world.

In a particularly adorable interview with E! News on Sept. 6, just five days before the now infamous kissing video, Cabello admitted that Mendes has always been "The One" for her. "I love him with all my heart and always have," she said. "We've known each other for a really long time… We've always been there for each other."

So, yeah. Sorry, guys, but I don't think they're really sweating our opinions on how they kiss.