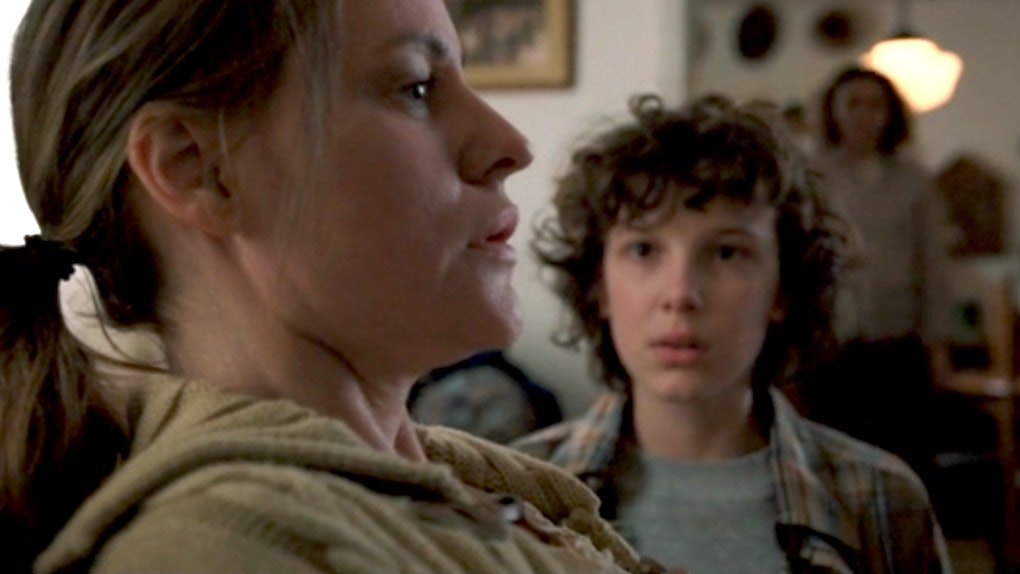 A major part of the second season of Stranger Things revolves around Eleven learning about her traumatic past, and most of that information comes from her long-lost mother, Terry Ives. We first met Terry in Season 1, when Joyce Byers and Jim Hopper discovered Eleven's mother was living in a catatonic state and being cared for by her sister, Becky, but we learn much more about her in Season 2. Spoiler alert: This post will discuss details from episodes 1-7 of Stranger Things Season 2. We even get to see Terry Ives' heartbreaking backstory, revealing the circumstances surrounding the birth of Eleven and what relegated her into that catatonic state.

After breaking out of the Upside Down at the beginning of the new season, we find out Eleven has been living with Jim Hopper in a hidden cabin in the woods since the events of last year. The time in seclusion has allowed Eleven to hone her psychic powers and use them to better locate people, but she has also grown frustrated about having to hide from everyone she knows. Finally, she uncovers information about her mom, locates her, and runs out of Hopper's cabin to find her.

However, Eleven doesn't find her mom in the condition she was hoping — her aunt Becky leads her into the living room where Terry is sitting motionless on a chair robotically repeating the same few words: "Breathe. Sunflower. Rainbow. 450." Becky explains that Terry is basically stuck in a dream-like state, but Eleven notices something that gives her hope. As the lights begin to flicker, Eleven realizes that her mother also has psychic powers, and she decides to use her ability to enter Terry's mind.

It's in the midst of this psychic link that Eleven is able to see what happened to her mom, which led to her separation from Eleven (whose real name is Jane) and relegated her to her catatonic state. The flashback shows Terry giving birth to Eleven, only to have the newborn taken by Dr. Brenner immediately afterwards. An orderly tells Terry that the baby had died, but she knows the truth.

Shortly afterwards, Terry returns to Hawkins Lab with a gun, shoots a guard, and begins frantically searching for her daughter, eventually finding her in a room alongside another young girl (later revealed to be an earlier abductee of Brenner's named Kali, who also has psychic abilities). But right when Terry finds Eleven, she's grabbed by security guards and taken to an operating room with Dr. Brenner, who straps her down and orders another man to send 450 volts of electricity through her head. The events then begin to replay in a loop, and Eleven realizes the words Terry's been repeating are salient events in the horrible story — Becky tells her to breathe when her water breaks; she sees a sunflower next to her hospital bed; Eleven was being kept in a room marked by a rainbow on the door; and 450 was the level of voltage that left her in the catatonic state she's currently in.

The horrific realization drives Eleven to tears after she returns to reality, and it also drives her to refocus her energy to getting revenge on the scientists that kidnapped her and crippled her mother. Luckily, she's able to find a perfect ally in her vendetta by locating Kali (numerically known as Eight) in Chicago and teaming up with her crew of misfits to kill the man who carried out Brenner's orders. However, things get more complicated when Eleven has second thoughts about killing a man with daughters of his own... Oh, and he also drops the bombshell that Dr. Brenner is still alive and out there somewhere. Go get 'em, El.