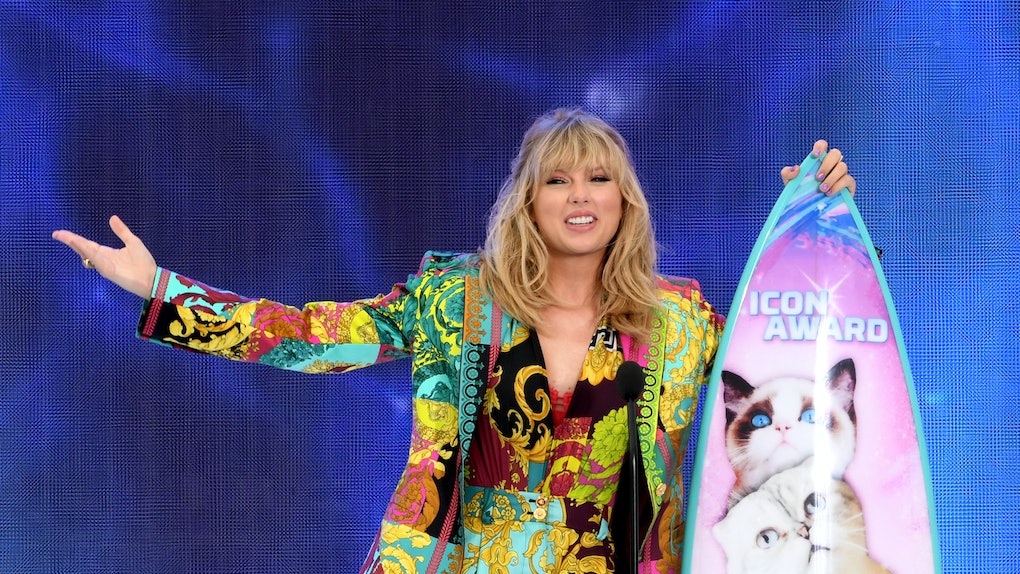 This has been quite a week for Taylor Swift's fan base. At midnight on Friday, Aug. 23, the 29-year-old pop star released her seventh album, called Lover, which may have gained enough attention to (hopefully) snag the title of Album of the Year. And even though all of the tracks on her latest album are pure gold, Taylor Swift's favorite lyric from Lover will definitely make you love one of the new songs even more than before. It's truly a work of art.

Just a few hours after Lover was released, a small group of lucky Swifties got the chance to attend Tay Tay's album release mini-concert at Sirius XM Manhattan, according to People. The intimate audience was blessed with an acoustic performance by Swift herself, featuring three tracks from Taylor Swift's Lover. After she sang “The Archer,” “You Need to Calm Down,” and “Daylight" on a sick pink guitar, Swift went on to answer questions from the audience.

And since Lover's highly anticipated release occured just hours before the show, fans were dying to know about Swift's favorite song on the new album. Would her song of choice be "The Archer," because it's supposedly about her partner, Joe Alwyn? Or would it be "London Boy," because it lists off all of the pop star's favorite things about the British capital city? Well, it turns out the singer-songwriter couldn't decide on just one track, so she decided on her favorite lyrical passage, which comes from the song "Death by a Thousand Cuts."

Our songs, our films, united we stand/Our country, guess it was a lawless land/Quiet my fears with the touch of your hand/Paper cut stains from our paper-thin plans.

Swift said the above passage is one of the most meaningful lyrics she's ever written, and honestly, I can see why. According to Heavy, the melancholy song is all about heartbreak. The title references an ancient form of Chinese torture, in which prisoners would bleed to death via several tiny lacerations on their bodies, comparing it to getting over a loved one. It's definitely a sore subject for many, and as Taylor Swift has experienced many breakups, she knows about heartbreak pains all too well.

And even though the passage from "Death by A Thousand Cuts" happens to be one of Swift's favorite lyrics from her new album, she also highlighted the track “Soon You’ll Get Better” as one of her more emotional creations. Swift worked on the song with the Dixie Chicks, and it details mom's relentless battle with cancer. "It was hard to write. It’s hard to sing. It’s hard to listen to for me," Swift reportedly told the audience. "But sometimes, music is like that. Sometimes it’s not just about stuff that was pleasant to feel.”

Like I said before, Taylor Swift's latest album is overall amazing. But her lyrical passage of choice is definitely a standout, and it goes without saying I'll be listening to that track until the end of time... next to a box of tissues, of course. Taylor, you've done it again.