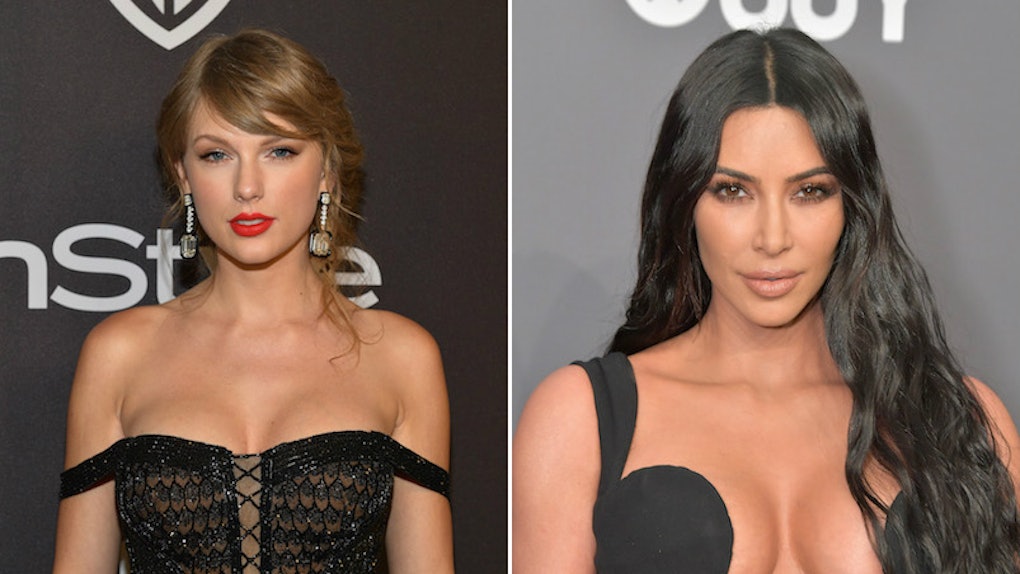 This year, I'll be turning 30. I know that you don't exactly care about that, so let me tell you who else is turning 30 this year: Taylor Swift. Yep, that means our girl will be feeling flirty and thriving come December, and the singer decided to get candid about what she's learned in all of her years on earth so far. Swift — whose birthday is on Dec. 13 — revealed her thoughts in a new Elle magazine interview, and Taylor Swift's comments about "petty bullying" definitely seem to be taken from her own personal experience with a certain Kardashian sister.

On March 5, Swift took to Instagram to share her Elle magazine interview, which was set to come out the next day. "According to my birth certificate, I turn 30 this year," Swift began. "It’s weird because part of me still feels 18 and part of me feels 283, but the actual, factual age I currently am is 29."

I relate to this on a spiritual level, you guys.

"I’ve heard people say that your 30’s are ‘the most fun!’ so I’ll definitely keep you posted on my findings on that when I know," she continued, adding, "But until then, I thought I’d share some lessons I’ve learned before reaching 30 with @elleusa, because it’s 2019 and sharing is caring."

And reading 30 things that Swift has learned before turning 30 is actually pretty eye-opening. She opened up about things like finding her political voice, learning how to process tragedy, and the importance of a good cocktail (preach) — but it's lesson number 27 that really struck a chord with me and many of her fans on Twitter. If you're wondering why, it's because there seems to be some correlation to what she's saying versus what went down between her and Kim Kardashian not too long ago.

"I learned that disarming someone’s petty bullying can be as simple as learning to laugh," Swift wrote.

In my experience, I’ve come to see that bullies want to be feared and taken seriously. A few years ago, someone started an online hate campaign by calling me a snake on the internet. The fact that so many people jumped on board with it led me to feeling lower than I’ve ever felt in my life, but I can’t tell you how hard I had to keep from laughing every time my 63-foot inflatable cobra named Karyn appeared onstage in front of 60,000 screaming fans. It’s the Stadium Tour equivalent of responding to a troll’s hateful Instagram comment with "lol."

She finished this little nugget of wisdom by saying, "It would be nice if we could get an apology from people who bully us, but maybe all I’ll ever get is the satisfaction of knowing I could survive it, and thrive in spite of it."

So, what it seems that Taylor Swift is trying to tell everyone is that when it comes to bullies, you just gotta... shake it off.

See what I did there?

While she doesn't mention Kardashian by name, the fact that she references the time that someone called her a snake makes it pretty obvious.

Remember, back in August 2017, Swift posted videos of a cryptic snake on social media leading up to the release of her album, Reputation. This all came about after Kardashian fans called Swift a snake after Kim Kardashian exposed her for reportedly lying about her knowledge of Kanye West's song "Famous" (Swift maintains that she didn't approve the use of the word "b*tch," for the record).

Anyway, Twitter did not miss the ~subtle~ dig. Some fans were loving the shade and totally team Taylor:

While others felt Swift was "playing the victim" in her feud with Kardashian.

Some fans just want her to stop talking about it:

So, look. While there's no finger pointed directly to Swift and Kardashian's reported feuding, it still seems like you can connect the dots to figure it out. And good for T-Swift for telling fans not to let anyone make you feel inferior or bad about yourself. 30 is a good look on her.