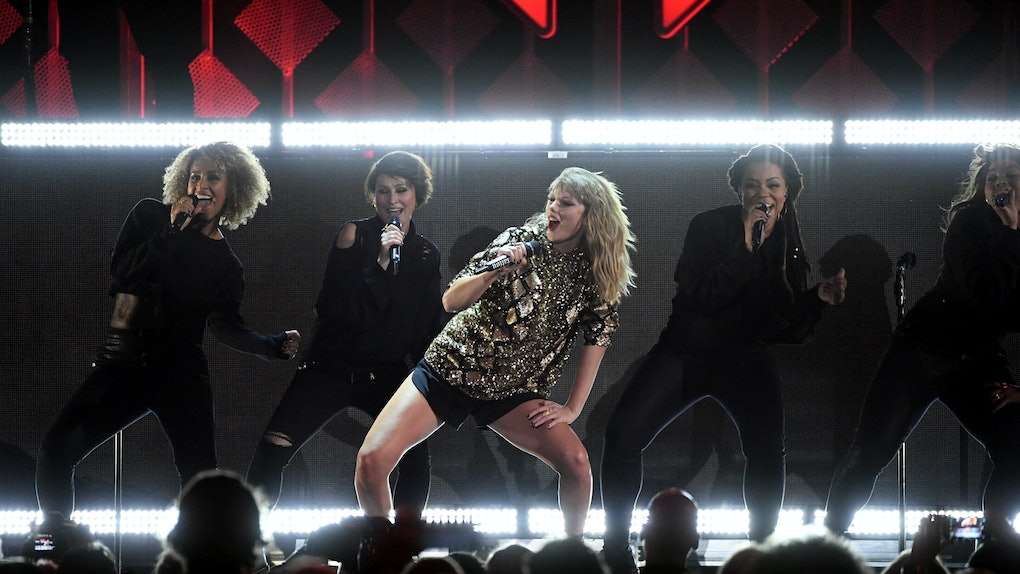 Can you EVEN with this T-Swift cover photo? I mean HELLO, someone I've never seen or met before! Taylor Swift's cover for British Vogue proves once and for all that the old Taylor is, in fact, dead. Make way for moody, edgy, curly-bangs Taylor, and let's keep this party going!

You guys of course know I'm referencing Tay-Tays rebirth, which began with the release of her latest album, Reputation. Swift famously delivered "Look What You Made Me Do" back in August of 2017, which is basically a literal, metaphorical, and symbolic shout out to her haters and the various rumors that have circulated her entire career. In the lyrics, Swift menacingly speaks the words, "Old Taylor can't come to the phone right now. Why? Oh, 'cause she's dead."

And, you guys, she ain't lying.

On British Vogue's cover, we're presented with a woman who seems miles away from the innocent teenager who once sat on a front porch in a princess dress during the "Our Song" days. What used to be all sunshine, smiles, and giggles is now bleached eyebrows, mouthy lyrics, and just a tinge of an "f-you" attitude.

I mean, take a look at this.

No one could find the girl some eyedrops before the photo shoot, huh?

Sure, I have no idea what's going on with her hair part, or what she's hiding in that red leather dress-bubble, but I do know if Vogue says it's in, then it's in.

The cover proudly boasts the words, "TAYLOR REMADE," "The most powerful women in art," and "Fashion's new energy." Frankly Vogue, you have my attention.

Photographers Mert Alas and Marcus Piggott had the honor of shooting Swift in the fascinating Anthony Vaccarello dress, and British Vogue Editor in Chief Edward Enninful created a 12-page shoot that is said to be setting the tone for #NewVogue's upcoming year.

For me, the chance to help transform America’s most fascinating sweetheart was a joy. As we took the pop icon on an epic fashion journey with photographers Mert Alas and Marcus Piggott, what struck me most about Taylor was her brilliant sense of humor, but also how, for a woman in her twenties, she has an incredible sense of who she is.

... Obviously, she is a world-class lyricist – and has written a stunning poem just for Vogue on the timely subject of reinvention and moving on – but she also takes her duties as a role model very seriously. Taylor is acutely aware of her following and how she communicates with young women, and will never portray a character that would send the wrong message. That said, even superstars aren’t immune to the power of a great dress. Taylor says she has never seen herself transformed like this before, and I was very touched to see how emotional she was at the end of our shoot day in London.

Thank you @edward_enninful and @mertalas for your passion, spirit, and contagious laughter on set. Mert and Marcus took these photos for @britishvogue and my album photos for reputation, and it’s been such a bonding experience working together so closely and talking so much about what we wanted to make. It’s been a while since I’ve done a magazine cover. I’m really happy my first one back was with such wonderful people. #newvogue

Love to hate or hate to love her, you've got to admit this transformation is pretty epic. (But also, can someone please get the woman some eyedrops?)