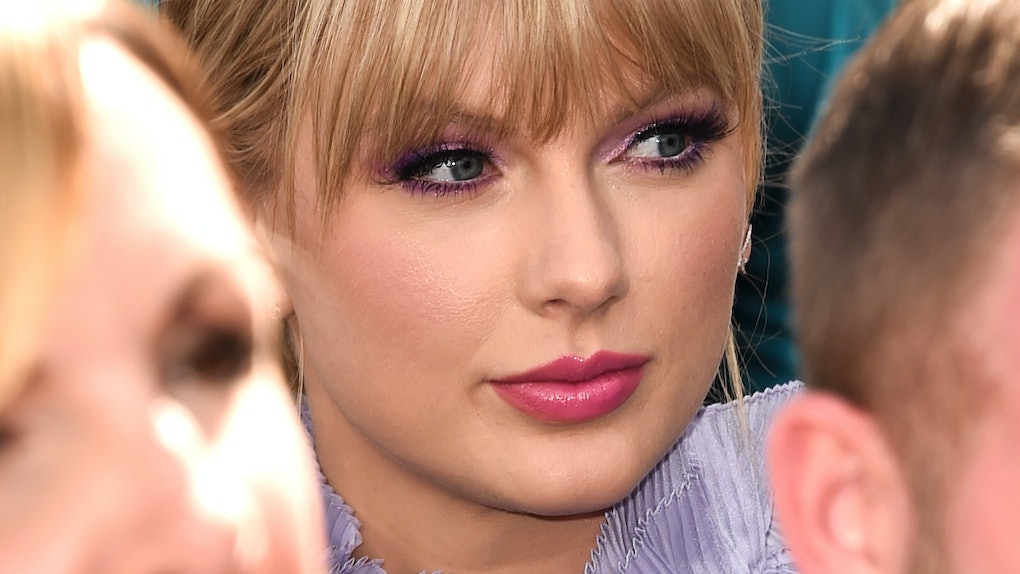 Taylor Swift is definitely having a major moment in the spotlight recently, given the recent release of her new single "ME!" And that moment is by no means slowing down with her appearance at the 2019 Billboard Music Awards. Taylor Swift's Billboard Music Awards dress is a long sleeve, short, lavender dream full of ruffles by Istanbul-based designer Raisa Vanessa, and suffice it to say, I am pretty much obsessed.

TBH, I'm so obsessed that I don't even know where to begin with describing the details, but I guess the neckline is the best place to start. The ruffles of the high collar extend to the shoulders of the dress and down onto the torso in an intricate design. The ruffles drape down even further to create larger layers of ruffles on the skirt of the dress. The rest of the frock is complete with the prettiest long sleeves that are made of delicately-designed lace. Basically, the entire look is giving me major modern Gone With The Wind vibes.

Now, let's get into the back of the dress, shall we? The Raisa Vanessa design zips up the back and has a diamond-shaped, lace-covered cutout between layers of ruffles.

The singer paired her light purple number with shimmery, light silver heels with darker metallic accents on the back. As for Jewelry, Swift wore several rings as well as a dazzling silver starry ear cuff that extends the length of her ear.

As for her mane, Swift wore her blonde hair pulled back into a low messy bun with her curtain fringe bangs styled across her forehead. For her beauty beat, she went with sky-high lashes, glittery pinky-purple eyeshadow, rosy cheeks, and a hot pink glossy lip.

Swift's pastel-themed look seems to be a continuation of her current pastel aesthetic that she has going on. If you've seen her Instagram recently, you'll know her posts leading up to the release of her new single "ME!" all featured a pastel rainbow aesthetic. Soon after developing this new rainbow-hued feed, she appeared at the Time 100 Gala giving off major princess vibes in a pastel pink, poufy-sleeved gown.

Swift is set to open the 2019 Billboard Music Awards with the first-ever live performance of her new single "ME!" and she will be taking the stage alongside none other than Panic! At The Disco's Brendon Urie, who performs with her on the single. In addition to performing her new hit single, she's also nominated in two categories: Best Female Artist and Best Touring Artist. Needless to say, it's a big night for Swift, so it makes sense she chose a big outfit to rock.

From the glittery, star-covered ear cuff and the matching glittery heels to the lavender ruffled dress and the matching purple eyeshadow, this look is definitely one of my favorite looks that I've ever seen the 29-year-old rock. Now, fingers crossed that she will drop a hint (or two) about the name of her next single or album during her performance.