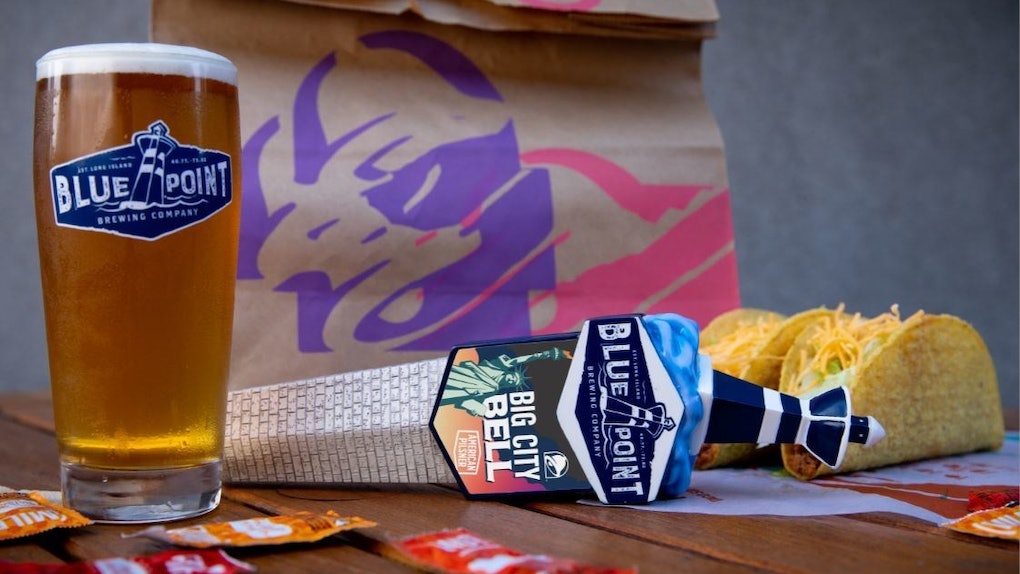 As a tirelessly devoted Taco Bell fan, I'm continuously impressed by the Tex Mex chain's latest and greatest innovations. Most recently, though, I've really been yearning to try T-Bell's new signature beer. Yep — the restaurant known for its Mexican-inspired food recently paired up with New York's Blue Point Brewing Company to create Taco Bell's Big City Bell Pilsner by Blue Point Brewing. It pairs perfectly with all of my favorite orders, and the best part is that it will officially be available in select Cantinas in the coming months. Save me a seat — I'm on my way.

If you're a beer drinker and you live in the Big Apple, there's a pretty good chance you've tried New York's Blue Point Brewing Company at least once in your life. And recently, the New York-based brewery partnered with Taco Bell (yes, you heard that correctly) to create the Big City Bell Pilsner.

According to the press release, this spankin' new brew blends a wide variety of citrusy hops, creating a super fruity fragrance. It's crisp and super smooth, and pairs perfectly with any and all T-Bell flavors. Whether your go-to order is tacos, a burrito bowl, or even Doritos Locos Tacos, you can't really go wrong. In the Dec. 19 press release, Taco Bell revealed that Big City Bell Pilsner will be available "in the coming months" at three New York City Cantina locations, which will be open by the end of 2018. So, lucky New Yorkers and travelers headed to the Big Apple can get a taste once the brew finally arrives.

You may remember way back in 2017 that the beloved chain created a Taco Bell Cantina restaurant in Newport Beach, California. Cantinas don't have drive-thru options, but they do have a more restaurant-like atmosphere (they even sell alcohol!). Now, Taco Bell is opening three Cantina locations in Manhattan, and seeing as I don't own a car, I deem it highly necessary. Anyway, according to the press release, one Cantina will open in Hell's Kitchen at 840 8th Avenue; another will open in Chelsea, at 224 7th Avenue; and the third will open in Midtown by Penn Station, at 500 8th Avenue. Each will officially open its doors by the end of 2018, and if you ask me, it's a taco-lovin' miracle.

According to the press release, Lally said:

We're so excited to be part of the Cantina launch in our hometown. We're looking forward to New Yorkers relaxing and enjoying some tacos with the new Big City Bell Pilsner.

I don't know about you, but I, personally, am too freakin' stoked to try Taco Bell's Big City Bell Pilsner by Blue Point Brewing. It sounds like just about everything a taco needs, and as a Big Apple resident, you know I'll be sipping this whenever possible. TBH, New York City Cantinas are a Christmas miracle. Merry sip-mas, and a happy brew year!