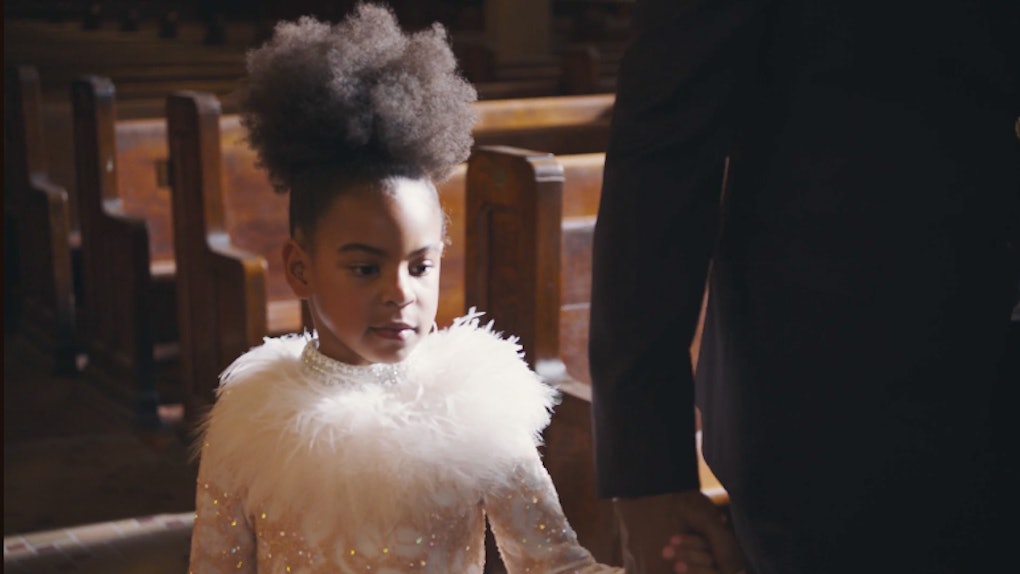 After months of waiting, the music video for JAY-Z's "Family Feud," off his 2017 album 4:44, was finally released on Friday, Dec. 29. The video goes through a series of time-hopping scenes involving generations of JAY-Z's family in the future, and it incredibly includes This Is Us actress Susan Kelechi Watson playing a grown-up Blue Ivy. The video, which was directed by Ava DuVernay, shows scenes from the years 2444, 2148, 2096, and 2050, as well as an extended sequence from 2018. Blue makes an appearance in both the 2050 and the 2018 scenes — and how her character is used is really inspiriting and emotional.

The first five minutes of the eight-minute video show this series of different periods of time in the future. Arguably the most powerful of these scenes is the 2050 scene in "Family Feud."

"My beloved ancestor was one of the chief architects of the confessional papers, and one of America's Founding Mothers," a man from a future year says in a voiceover, as the camera shows a group of women sitting around a conference table. "She and a group of women from all walks of life revised the Constitution over 444 years ago — at a time, mind you, when some thought that making America great meant making us afraid of each other."

Donald Trump reference aside, it is revealed that the "beloved ancestor" to whom the narrator is referring is, in fact, Blue Ivy. That fact isn't revealed until we get to the end of the 2050 sequence, however.

First, we see the women discussing varieties of policies and rights in their 2050 effort to revise the Constitution. Specifically, they discuss arguments around the Second Amendment, which is the right to bear arms. As the women (who are played by a fab variety of actresses) state arguments, a woman at the head of the table, played by Watson and wearing white, nods and listens. Eventually, Watson's character speaks.

"Ladies, this is just like the 13th Amendment [which abolished slavery], some people have their liberties and some people don't," she says. "America is a family, and the whole family should be free. It's like I remember my father saying when I was a little girl: Nobody wins when the family feuds."

AND THERE IT IS.

Once Watson says the line about her father, referencing JAY-Z's lyrics, the video goes to show Blue Ivy walking into a church along with JAY-Z and Beyoncé. The screen indicates that this is a scene from 2018. So, it's indicated that Watson's character — a leader of the Founding Mothers — is actually Blue Ivy.

Twitter lost their minds over grown-up Blue as a leader of the future United States.

Fans of This Is Us were especially gratified by Watson's turn as grown Blue in the "Family Feud" video.

Aside from Watson's portrayal of Blue, fans were excited to see the real Blue herself.

Blue Ivy (the real Blue Ivy) has a lead role for the final three minutes of the "Family Feud" video.

The last three minutes of the video run like a more traditional music video. It shows JAY-Z in a confessional booth rapping his lyrics through the partition. On the other side of the booth is Beyoncé, looking absolutely fantastic, of course. Meanwhile, Blue sits by herself in an amazing white outfit in a pew by the front of the church. Aside from those shots are shots of JAY standing at the front of the altar, rapping along in what looks like a speech, nervously, while Beyoncé stands above him, dominantly, in the raised pulpit.

Really, though? It's all about Blue's power.

More like this
We Finally Know Who 'Becky With The Good Hair' Is In Beyoncé's Song
By Anna Menta and Brandy Robidoux
These Tweets About BTS' 'Bang Bang Con 2021' Sum Up The Epic Performance
By Cianna Garrison
With 'Like Water,' Wendy Found Her Biggest Cheerleaders In Her Red Velvet Bandmates
By Michele Mendez
Stay up to date