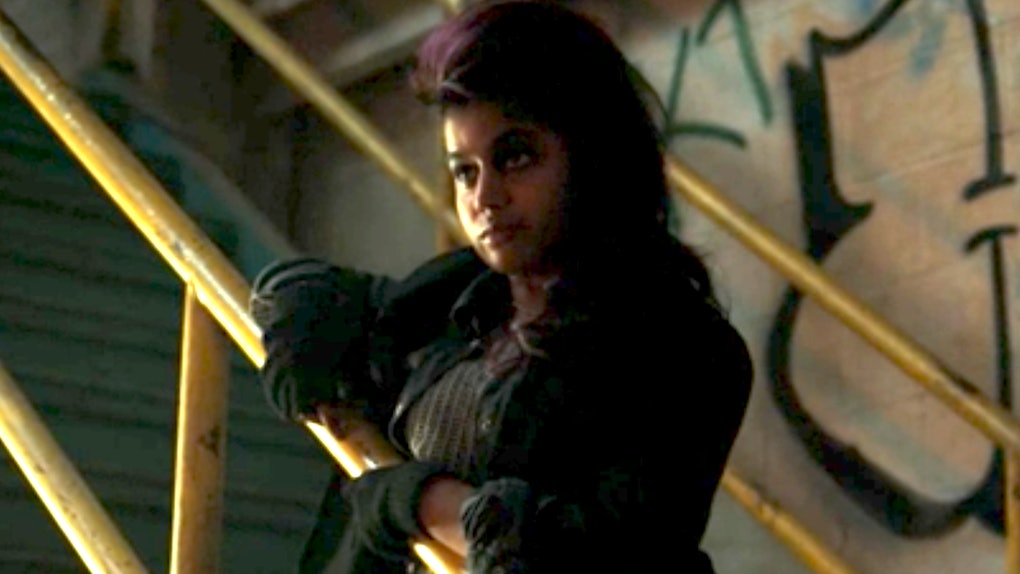 Season 2 of Stranger Things introduced fans to a bunch of new characters, but probably the most exciting of all is Eleven's long-lost "sister," Eight. Warning: This post contains spoilers for Stranger Things Season 2. The very first scene of the new season actually introduces us to Eight and her crew as they flee the scene of a crime. We don't learn much about them at the start, but we do see a girl named Kali make a police officer believe he saw a tunnel collapse in on itself, and then see the number eight tattooed on her wrist where Eleven also has her tattoo. Later in the season, we get to meet Kali and her band of misfits, but you might have missed all the Stranger Things Season 2 Episode 7 easter eggs leading up to Eight's appearance.

In the midst of all the drama going on in Hawkins and the Upside Down, Season 2 actually takes a brief break from the alternate-dimension monsters for a thrilling, caper-themed episode focused on Eleven meeting Eight and joining her crew to kill a former member of the Hawkins Lab team. Episode 7 is filled with all the police shootouts, robbery, and car chases that any action movie fan could ever want, but if you were too distracted by all the action, then you might have missed the fact that the episode was also packed with little shoutouts to Eight's entrance onto Stranger Things.

The first one is really easy to spot, and sets up the hidden 8s that pop up throughout the episode. After Eleven locates Kali while still at her mother Terry Ives' house, she runs out to go find her "sister" as Terry watches TV, which is playing "Action News 8." Before the opening credits, the 8 grows and fills up the screen.

Eleven locates Eight in Chicago, where she's living in an abandoned warehouse with a tatted-up, crazy-haired group of society's castoffs. The gigantic warehouse space is littered with graffiti, and the remaining 8s can be found painted on the walls.

For instance, when Eleven first enters the warehouse, there's a large Magic 8 Ball painted on the wall next to the door. This is actually an especially perfect image to foreshadow Eight, since she will later describe her power to create images in people's minds as being "like magic."

There are a couple more graffitied 8s later in the episode after Eleven finally does reunite with the girl she was once held captive with. When the gang agrees to go after a man who used to work for Hawkins Lab (whom Eleven saw torturing her mom), a figure that appears to be an 8 can be seen in the window. Yeah yeah, it might be a "B" to complete the word "mob," but the bit of red paint curving in at the center on both sides actually makes it look more like an 8.

Towards the end of the episode, we see Eight/Kali appear alongside her numeric moniker, as she enter's the room Eleven's staying in with a graffitied 8 on the wall right next to the entrance.

In the end, Eleven decides to part ways with Eight and her life of crime to return to her friends in Hawkins, but it seems likely that Eight's story on the show will return in a later season... or maybe a spinoff? Eight's introduction also brings up the question of where the other nine super-powered, kidnapped children that Dr. Brenner experimented on before Eleven are and what they're up to, or even if there's a Twelve, Thirteen, etc. out there. How many of these traumatized, psychic people are out in the world, and will they try to find one another in the future?