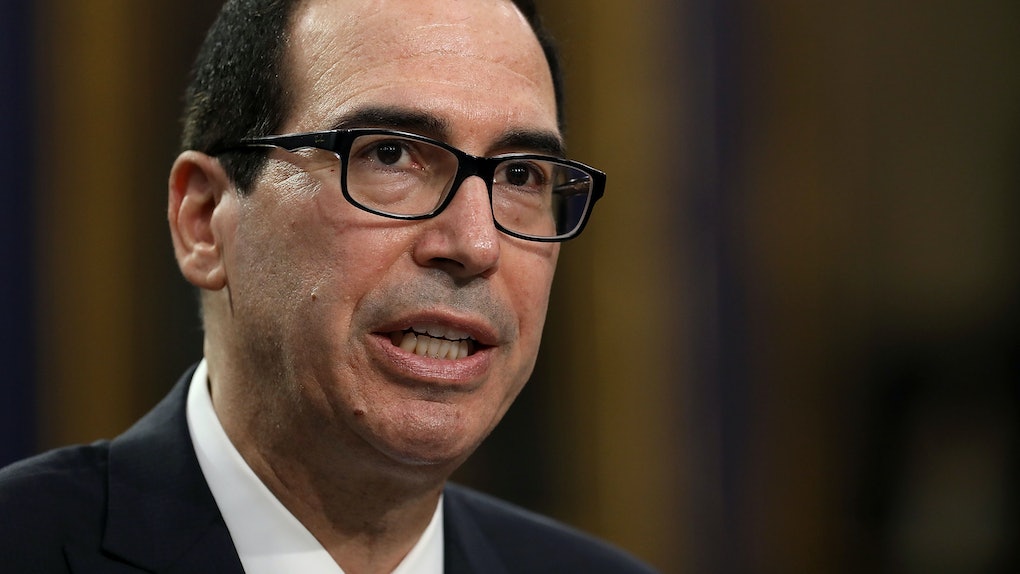 Steve Mnuchin Got Poop For Christmas & We Can't Stop Laughing

This year for Christmas, Republicans got what can be safely assumed to be the gift that was at the top of their list this holiday season: the GOP tax bill. And while the members of Congress and the Senate that supported the bill are calling the passing of it a "major win" for President Donald Trump's administration, not everyone seems to feel the same. Which is probably why the U.S. Treasury Secretary Steve Mnuchin received a very special gift in return (or better yet, retaliation) this holiday season. What was it, you ask? Steve Mnuchin got actual poop for Christmas and whoever sent the special package is our hero.

It's safe to say that not everyone is as enthusiastic about the GOP's new tax bill being signed into law as Republicans and Donald Trump's White House are. The new bill will in large part benefit large corporations and the very wealthy, to the disappointment of Democrats who vehemently opposed the bill and are disappointed that it made it through the ringer during voting procedures at both the House of Representatives and the Senate.

And it's not just Democrats in D.C. that are upset — because a brave soul decided to express their distaste for the new bill by sending Steve Mnuchin a package filled with poop to the doorstep of his Bel Air mansion. And the poop isn't just any ordinary kid of poop. That's right, this individual is a creative one, because the package was filled with horse manure. Yes, you read that right. Horse manure.

And that's not even the best part. Just when you thought this story couldn't get any better, it does. Because the "gift" is said to be signed from "the American people," according to the New York Post. And this package is the Christmas Eve gift that I didn't know I needed this holiday season.

I'm not the only person that's seriously loving this, because Twitter users are also expressing their admiration for this "gesture."

Yeah, it's that good. And just when you thought this little news item doesn't get better, it does. According to KTLA, the package was reported to police as "suspicious" after it was discovered by a neighbor on Dec. 23, in the 900 block of Bel Air Road where Mnuchin resides (of course). The police department then dispatched a bomb squad to inspect the package, only to announce that it contained "horse feces." The police even closed down the block to inspect the package, which I personally think is hilarious because it's oh so very dramatic. All that drama over a box of horse poo — this is amazing.

Mnuchin was sworn in as Donald Trump's nominee for treasury secretary in February 2017, and before becoming an official member of Trump's White House staff served as his finance chairman during the 2016 election campaign. Prior to working for Trump, Mnuchin was a banker that worked for Goldman Sachs and ran OneWest Bank in Pasadena, California. So naturally, the public was concerned about his Wall Street ties following his nomination and subsequent swearing-in.

And with this controversial tax bill that has officially been signed into law just before the government goes on their holiday break, those who do not benefit from the bill as much (the poor and middle class, a.k.a the majority of the nation) are understandably upset. And one person was upset enough to show the person in charge of the nation's economy how they feel about this bill, in the form of horse manure.

And clearly, people are loving the "gesture." So if the person who sent the poo over to Mnuchin's house ever reveals themselves, they are sure to get endless praise for the prank this holiday season — and quite possibly for the rest of their lives. So thank you, sender of the poo. While people can't be all that enthusiastic about the tax bill, at least this gift to Mnuchin made us laugh.

More like this
What Is Boo Bash At Disney World? The Halloween Event Has Rides, Music, & Themed Treats
By Cianna Garrison
These Cinco De Mayo 2021 Deals Include Free Tacos, $1 Slurpees, & $5 Margs
By Daffany Chan
The Woman Behind @NorisBlackBook Is Serving Hilarious Kardashian Commentary On IG
By Lara Walsh
Stay up to date